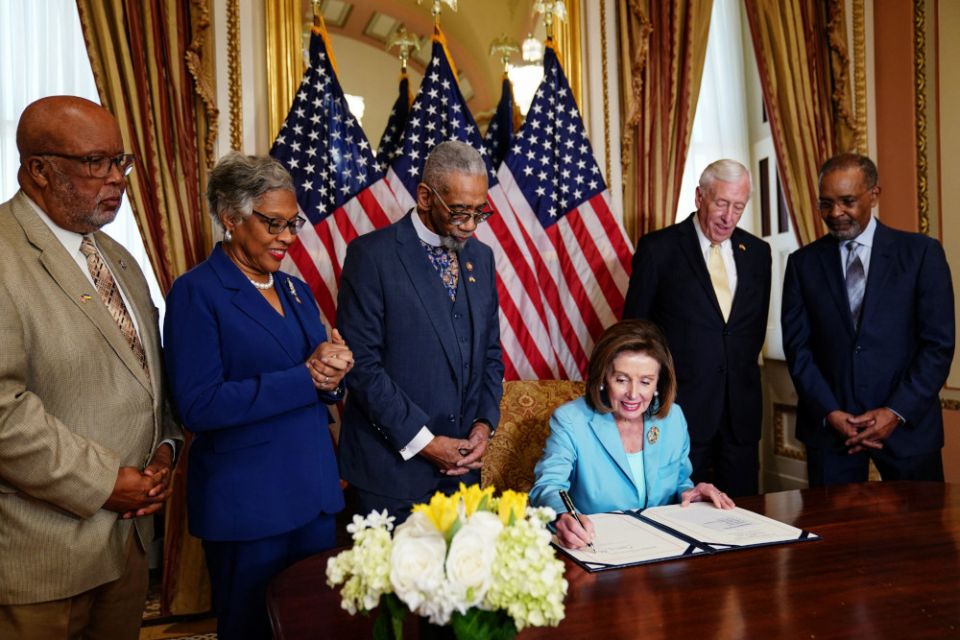 Washington — Since San Francisco Archbishop Salvatore Cordileone barred House Speaker Nancy Pelosi from receiving the Eucharist in his jurisdiction on May 20, three other bishops from the conservative wing of the U.S. Catholic Church have followed, citing her support for abortion rights as cause to invalidate her right to the sacrament.

The same day that Cordileone determined in a public letter that Pelosi was "not to be admitted to Holy Communion unless and until she publicly repudiate her support for abortion 'rights' and confess and receive absolution," Bishop Robert Vasa barred the speaker from Communion in the Diocese of Santa Rosa, which borders Cordileone's archdiocese.

"I have visited with the pastor at St Helena and informed him that if the Archbishop prohibited someone from receiving Holy Communion then that restriction followed the person and that the pastor was not free to ignore it," Vasa's statement read.

Cordileone, Vasa, Burbidge and Strickland are part of a small but increasingly strident group in the U.S. bishops' conference that feuded with their colleagues last summer over whether clerics should deny the sacrament to Biden for his support of abortion rights. More liberal-leaning bishops, such as Bishop Robert McElroy of San Diego, accused supporters of the idea of having "weaponized" the Eucharist.

A report on the issue delivered months later chiefly recommended that American Catholics be given more education on the meaning of the Eucharist.

Canon 915 states: "Those who have been excommunicated or interdicted after the imposition or declaration of the penalty and others obstinately persevering in manifest grave sin are not to be admitted to Holy Communion."

Fr. John Beal, a canon lawyer and professor at the Catholic University of America, was dismissive of Vasa's argument, which contradicts the commonly held belief that Communion denials are limited to an individual bishop's diocese.

"Bishops are rarely punctilious about procedural niceties," Beal said in an email.

Burbidge appeared to echo Vasa when he declared on a podcast that he intends to respect Cordileone's ban on Pelosi because "he is her bishop and as that bishop the direction and guidance he provides is not limited to just a geographical area." Representatives of the Arlington Diocese said they could not confirm whether Burbidge was making the same argument as Vasa.

Strickland, for his part, said in an email to Religion News Service that he is less concerned with the canonical question, referring to it as "a question of jurisdiction" and acknowledging "interpretations of Canon Law will differ." But he insisted his own ban arose primarily from his "desire was to emphasize that what Archbishop Cordileone is doing is considered to be 'medicinal' for the state of Mrs. Pelosi's soul."

Asked about the new bevy of bans levied against Pelosi, a spokesperson for the Diocese of San Diego replied, "We don't really go out of our way to comment on what's going on in other dioceses."

On May 22, two days after Cordileone's public letter, Pelosi received Communion at a Jesuit church in Washington, where Cardinal Wilton Gregory, the archbishop of Washington, has signaled his opposition to the idea of barring politicians from Communion because of their views on abortion.

She also questioned why the bishops had not refused the Eucharist to politicians who dismiss other Catholic teaching on life issues. "I wonder about [the] death penalty, which I am opposed to," Pelosi said. "So is the church, but they take no action against people who may not share their view. … So, we just have to be prayerful. We have to be respectful. I come from a largely pro-life Italian American Catholic family, so I respect people's views about that. But I don't respect us foisting it onto others."

During last year's debate on giving the Eucharist to politicians who support abortion rights, Bishop Kevin Rhoades, then-chair of the U.S. bishops' Committee on Doctrine, suggested denying Communion could be extended to issues beyond abortion.

"Even though a lot of the publicity has been about pro-abortion politicians, I think we would also look at, let's say, someone who's involved in human trafficking," Rhoades said. "The scandal that would be created if someone publicly was involved in that, or was a leader in a white supremacist group or whatever, going up and receiving Holy Communion — obviously that would be problematic."

In the wake of a mass shooting that took place this week in Uvalde, Texas — where 19 children and 2 adults were killed by a gunman — some Catholics have asked whether bishops should also withhold Communion from politicians who don't support legislation to curb gun violence.

"Will any bishops ban politicians who don't support gun control laws from receiving Communion? We protect the lives of the unborn," read a tweet from Jesuit Fr. James Martin, an author and consultor to the Vatican's Dicastery for Communication. "How about, as Pope Francis said, 'those already born'?"

This week, Cordileone came out strongly in favor of measures to curb gun violence, tweeting, "There have to be sensible gun regulations to help stem the pandemic of gun violence, such as stronger background checks, restrictions on AR-15s, and raising the age of purchasers to 21."

RNS asked the Archdiocese of San Francisco if Cordileone would also support barring people from Communion who refuse to support gun control legislation, but did not receive a reply.

A version of this story appeared in the June 10-23, 2022 print issue under the headline: Pelosi barred from Communion in at least four dioceses .