Sr. Simone Campbell, head of Network, to step down in March 2021 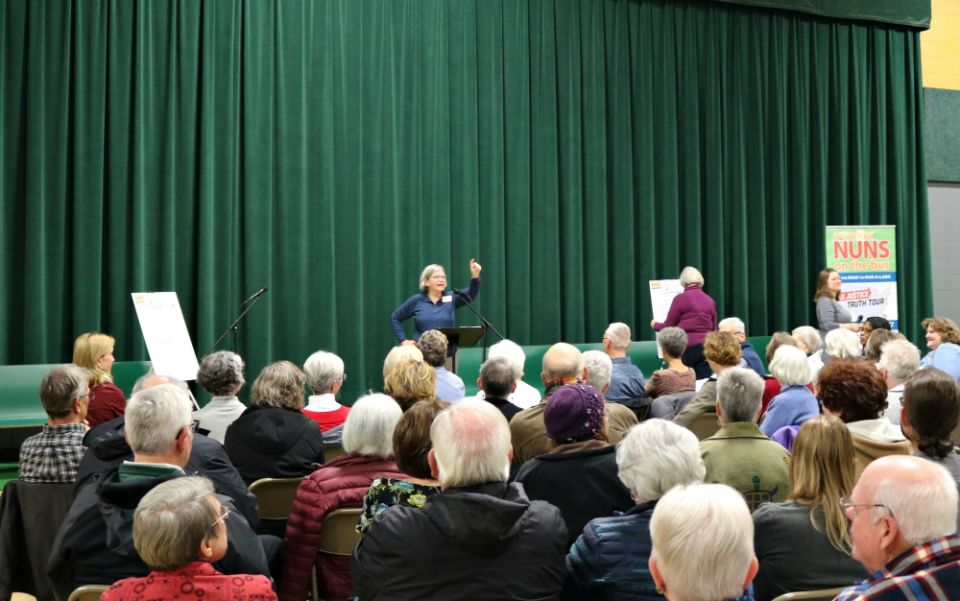 Editor's note: This story has been updated with statements from Pax Christi USA.

After 16 years of leading the nation's most politically engaged group of religious sisters and becoming the face of the Nuns on the Bus movement, Social Service Sr. Simone Campbell announced on October 20 that she would be stepping down as head of Network, a Catholic social justice lobby, effective March 2021.

Campbell, who is also a lawyer, has served as executive director of Network since 2004. In a statement released on Tuesday, she said "the time has come for new leadership."

Network was originally founded in 1971 by a group of religious sisters who voted to set up operations in the nation's capital to push for federal legislation on issues such as environmental protection, poverty relief and opposition to the Vietnam War.

In an interview with NCR soon after announcing her resignation, the 74-year-old sister said "We're in a strong position, and we're ready for a new imagination."

Campbell told NCR that she and the Network board had planned in 2016 that she would step down in 2018 with new leadership for the 2020 presidential election. She said the election of President Donald Trump changed that calculus.

"I couldn't step away," she said. "It was impossible."

Although Network has avoided endorsing particular candidates in past elections, this year they have mounted a campaign specifically targeting Trump for not being consistent with Catholic values. A central tenet of their messaging has been to encourage Catholics to become multi-issue voters and not to focus singularly on abortion. In August, Campbell offered the opening prayer for the Democratic National Convention, and in September, she spoke at the launch of the Catholics for Biden campaign efforts.

Looking back on her career, as she has become a fixture on Capitol Hill, Campbell said the clear highlight was her work in helping secure the support for the passage of the Affordable Care Act.

Both President Barack Obama and Vice President Joe Biden would later credit the nuns, saying the legislation would not have passed without their backing. Crucial to that support was a letter drafted by Campbell and signed by leadership representing the overwhelming majority of religious sisters across the country endorsing the Affordable Care Act despite opposition from the U.S. Catholic bishops. 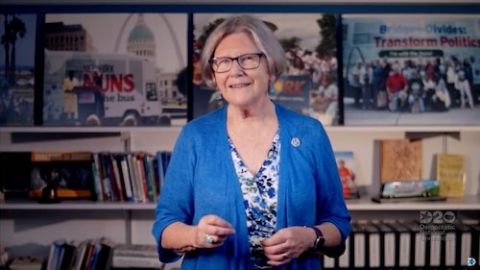 Campbell also said she is especially proud of the ongoing work of Nuns on the Bus where "sisters are seen and doing our work for justice. What a gift of the spirit." Although the physical bus tour has been halted this year due to the pandemic, Network has continued its efforts through a virtual tour launched last month with the participation of Speaker of the House Nancy Pelosi with the theme of "Who We Elect Matters."

Campbell said that she is unsure of what she will devote her attention to next, noting that her immediate focus remains the presidential contest.

"My focus has been so intensely on this election and our virtual Nuns on the Bus. We have to do this, and hopefully a good transition, and then I'll have some time when I'm done to let the Spirit speak up."

"When working so hard, it's hard to find time to hear the whispers of the Spirit, and I need a little fallow time to do that," she said.

Upon news that Campbell would step down, her leadership was praised by Catholic peace movement Pax Christi USA highlighting her "extraordinary leadership" in the church and country.

"She has elevated the Catholic community's work for peace, justice, equality and dignity on numerous fronts, bringing special attention to the work of women religious who have served on the front lines of every major social issue that our nation faces and in every community where the people of God are called to minister," wrote Bishop John Stowe of Lexington, Kentucky, the bishop-president of Pax Christi USA, and Isaac Chandler, Pax Christi USA National Council chair.

They continued: "She has brought their witness — and the witness of Catholics everywhere whose work is inspired by and reflects the Beatitudes — from the margins to the center of the national conversation about what and who we should prioritize as people of faith."

For now, she said the words of the Song of Simeon from the Scriptures come to mind that "now you can dismiss your servant in peace."

Related: Catch up with coverage of the 2020 Nuns on the Bus virtual tour

News | Sr. Simone Campbell, head of Network, to step down in March 2021