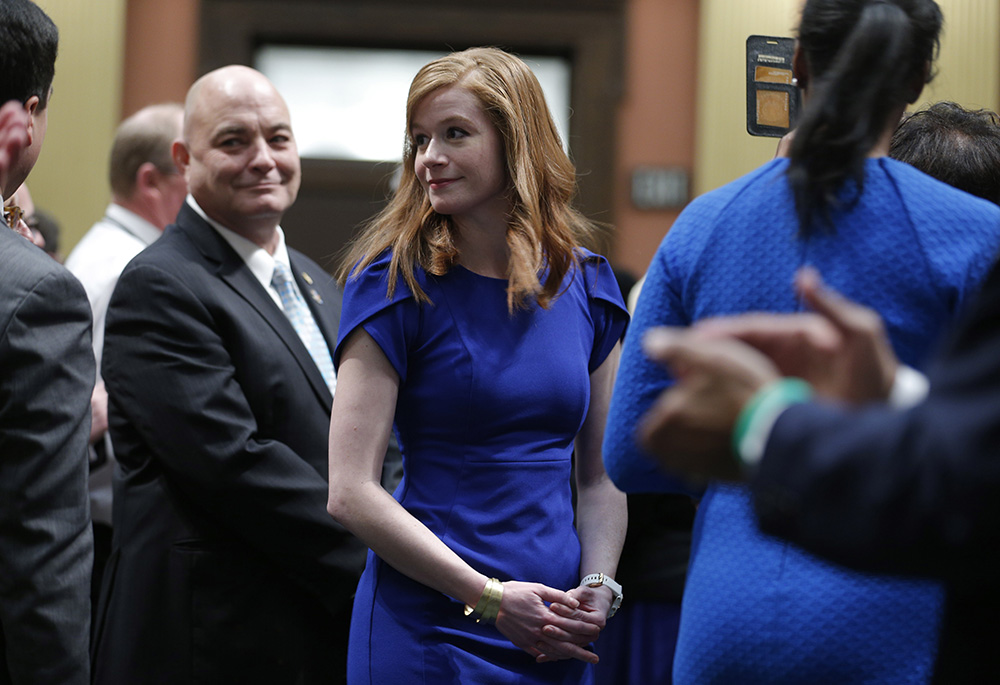 Michigan state Sen. Mallory McMorrow, center, is shown at the state capitol before the State of the State address, Jan. 29, 2020, in Lansing, Michigan. (AP photo/Al Goldis) 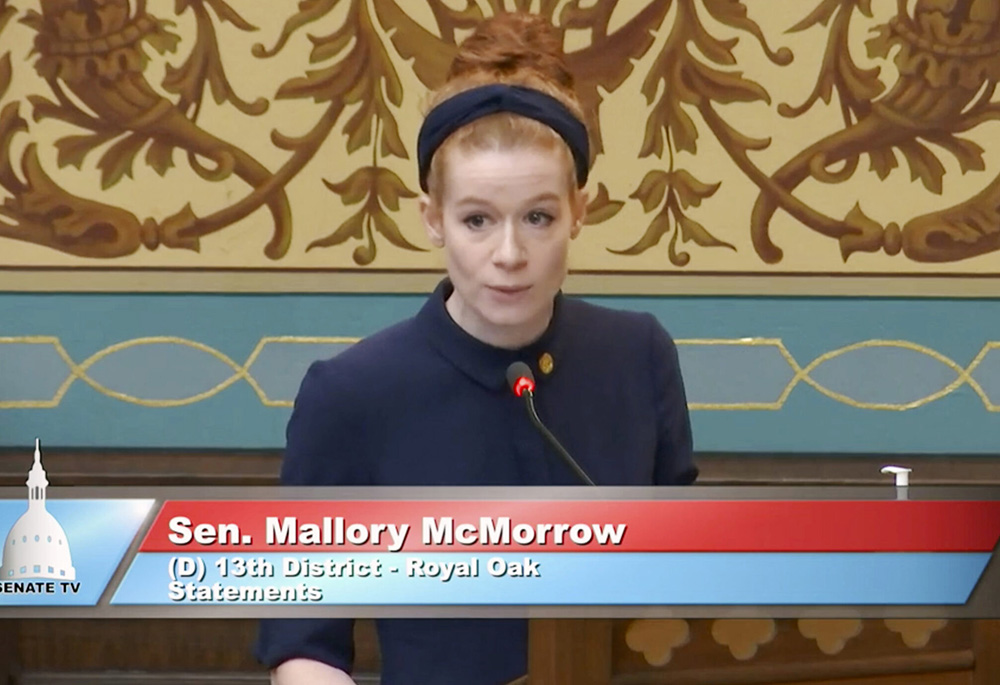 This image taken from video provided by the Michigan Senate shows Sen. Mallory McMorrow speaking on Tuesday, April 19, 2022. The Michigan lawmaker, mother and LGBTQ rights backer who was falsely accused of wanting to "groom kids" by a Republican colleague drew widespread praise for defending herself in a 5-minute speech from the Senate floor. McMorrow, who has not gotten an apology, said she will not stop forcefully addressing such attacks. (RNS/AP/Michigan Senate)

Michigan state Senator Mallory McMorrow had several goals when she stood at the podium on the chamber floor to deliver her remarks on April 19, but one was simple.

She wanted to "reclaim faith from people who were using it as a weapon to hate people," McMorrow told Religion News Service.

The result was a fiery speech widely shared on social media that showcased McMorrow lambasting her colleague Sen. Lana Theis. The thrust of the address focused on McMorrow's frustration with an emerging form of conservative rhetoric utilized by Theis that, among other things, casts defenders of LGBTQ rights as "groomers."

But McMorrow, a Democrat, also framed her remarks around a discussion of faith, which is where the conflict between the two lawmakers began: The previous week, Theis opened a legislative session by praying for children "under attack" from "forces," spurring McMorrow and others to walk out. Theis later singled out McMorrow by name in a fundraising email, accusing her of wanting to "groom and sexualize kindergartners."

McMorrow responded by saying her mother taught her faith is "about being part of a community, about recognizing our privilege and blessings and doing what we can to be of service to others — especially people who are marginalized, targeted, and who had less, often unfairly."

"I learned that service was far more important than performative nonsense like being seen in the same pew every Sunday or writing 'Christian' in your Twitter bio and using that as a shield to target and marginalize already marginalized people," McMorrow said.

RNS sat down virtually with McMorrow on April 22 to discuss the speech, her faith and the intersection of religion and politics. Asked about her remarks, she noted: "My personal story is not everybody's personal story, but everybody has a personal story. So find that way to make a connection."

RNS: During your recent speech, which has garnered a lot of attention, you spoke at length about your faith and identified as Christian. Can you say a bit more about your faith story and religious identity?

McMorrow: I was raised Catholic, and we were very active in our church growing up. I sang in the choir, my mom taught CCD [Confraternity of Christian Doctrine, or Sunday school]. We were active not only every week, but in the middle of the week and there all the time.

But I'll very candidly say it wasn't the best experience. Our priest in that parish wasn't particularly kind or welcoming. My mom and dad divorced when I was fairly young, and he treated that very negatively. It was punitive: [He] held a meeting and said that [my mom] wasn't living up to the church's expectations. I actually talked a lot with my mom over the past week, and she told me that he also tried to fine her $70 for taking me to a soup kitchen outside of our diocese.

They fined you for going to a soup kitchen?

Yes. So you know, it just wasn't a good experience. We effectively left and became significantly less active. But what I took from it — the things that I really liked and were really positive — were the sense of community and giving back. That was always something that I held very personally.

I went to the University of Notre Dame, and I think one of the things that drew me to Notre Dame was that it was still grounded in service. I would attend services in our dorms because you could show up in your pajamas. It was given by our rectors, and it was much more casual. I loved our comparative religion class. I loved learning about all of the similarities between Catholicism and the Jewish faith and the Muslim faith. It was just tearing down the idea that we're so different when there's so much that is actually similar.

So I wouldn't consider myself attached to a specific faith at the moment. My husband is Jewish, I still identify as Christian. Really, for me, it is that … I hold [former Notre Dame President] Fr. Theodore Hesburgh up in very high regard as somebody who recognized his position, his privilege as a faith leader and as a white man. He was instrumental in bringing women into the university 50 years ago.

I was just on a panel with other women alumni, and one woman who works at GE in an executive position recalled stories of Father Ted calling to ask how the women are doing now that we're in the university. ... He wanted to make sure it wasn't just white men who are succeeding. He was on the frontlines of the civil rights movement well before it was popular, and to me that is what Christianity is all about: faith and service.

Frankly, part of what I wanted to do this week is reclaim faith from people who were using it as a weapon to hate people.

In your speech, you referred to Sen. Lana Theis' use of "Christian" in her Twitter bio as "performative," and walked out of a prayer she gave at the state senate prior to sending the email. Are you saying her actions offended you as a person of faith?

I think a lot of Americans have a very similar faith experience, and it's a challenging thing as somebody running for office, because sometimes you're just filling out a form and it asks "religion," and you have one word to fill in. I don't have one word — I have a long explanation.

But as it relates to this attack about groomers and pedophilia — you know, the Catholic Church itself has a really ugly history with this actual thing. And to lever and charge that attack against really anybody who is in a marginalized community, whether it's LGBTQ kids or, frankly, me just for standing up with LGBTQ kids … it's hateful, and it's wrong.

I think we've seen throughout history that religion and faith can be incredibly powerful and a source of hope and community. But it can also be used for really dark things. That is, I think, what we're seeing play out right now: this performative Christianity and this idea that if you say in your Twitter bio that you're a wife and a Christian, that somehow that gives you authority to tell anybody who isn't that they're less than and to push policies and rhetoric that's just hateful. That's why I walked out of the prayer.

People ask me, why do we even have prayer in government? Isn't there supposed to be separation of church and state? You can have that argument, but in my mind that is supposed to set the tone for the session. We are all in service to 10 million people in the state of Michigan, and usually [the prayer] is fairly innocuous and really talks about that responsibility, and we can come together and hopefully we can find guidance. [But] this was a thinly veiled attack on the gay community, on the LGBTQ community, trying to use sort of similar language as Florida's "Don't Say Gay" bill and claim our children are under attack.

It's the hypocrisy to say 'our children are under attack,' while not caring about those [LGBTQ] kids, that they don't count. I just found that so disgusting and such a misuse of prayer.

Theis did an interview with a radio station this week in which she said the language of her email was "clunky," insisted "groomers" is not code for pedophile and again noted that you walked out of her prayer. I'm curious as to your response that, including her continued reference to faith?

Somebody asked me today, "Do you think [Theis] is a hateful person?"

I don't know that I would say she's a hateful person, but the words are certainly very hateful. I know there's a lot of people who maybe don't know somebody in the LGBTQ community.

You can't simultaneously claim you are a person of faith and you want to protect children without really taking a step back and thinking about how your words impact others. … You can't just throw words around. There are plenty of ways to talk to people in the LGBTQ community. We have an openly gay colleague in Sen. Jeremy Moss, who I talked with the night before my speech to make sure my tone was right — because it's not impacting me. I wanted to make sure I was stepping into it in the right way.

She takes it as a hit on her faith. It's not, but you have to know words matter.

Would you say your faith doesn't seem to be incongruous with supporting ongoing LGBTQ rights campaigns?

Religious freedom in this country means you are free to practice your own religion, not you are free to inflict it on other people if they don't agree. So no, I don't think there is any conflict with supporting gay marriage, supporting LGBTQ issues, because people are people, and everybody has a right to exist and express whatever beliefs they have, so long as it doesn't harm other people.

What has the reaction to your speech been like personally? I know you mentioned speaking with your mother — have there been any other religious reactions?

You know, I sort of steeled myself up for a lot of pushback. [But] I have been blown away by how heartwarming, positive, supportive and kind it has been from all sides. We've gotten emails and phone calls from not only all around Michigan and all around the country, but all around the world. We've gotten messages from Germany, Israel and Lebanon and people of all different faiths who say this really resonated.

I picked up a phone call that just rang through the office and said hello. A woman asked if this was Sen. McMorrow's office, and without identifying myself, I said yes.

And she said, "I'm a white, Christian Texan woman. And [McMorrow] said everything that I would want to say to my kids and my grand babies and my neighbors — and her mama should be very proud."

That's been the overwhelming response: that faith isn't hateful.

What would be your message to people of faith who share your opposition to these bills and these campaigns?

Members of the LGBTQ community, especially those who are people of faith, I think, are struggling with this messaging right now. [But] it's not everybody, it is a small subset of people that are leveraging these attacks. There's a lot more of us who support you and love you and see you as you are. My hope is that you know, by speaking from a place of somebody who's not impacted by this rhetoric, more people like me — who are frankly comfortable and okay and have the emotional capacity to take it on — can stand up and take the hits. Because it's asking a lot of people who are already under attack to defend their own right to exist right now, and they need more people like me.