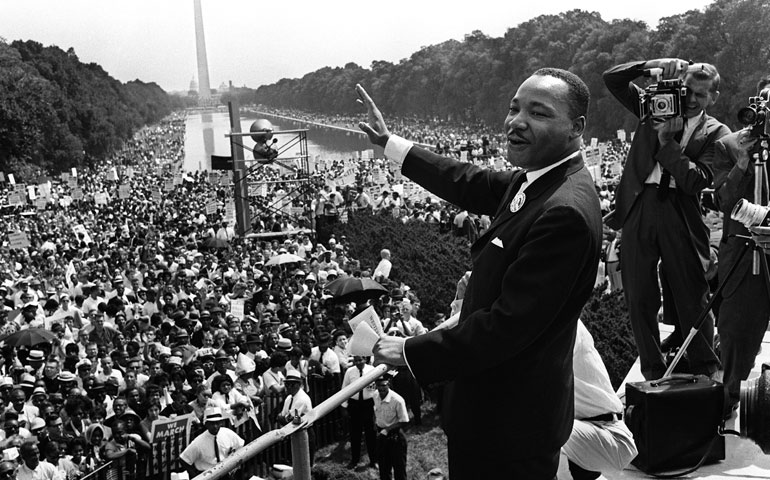 It was a moment of high drama. And the Rev. Martin Luther King Jr. was trying to find his rhythm.

He stood before the Lincoln Memorial to address some quarter of a million black and white participants in the March on Washington as well as untold millions of television viewers watching a live broadcast.

One early line was: "And so today, let us go back to our communities as members of the international association for the advancement of creative dissatisfaction."

As King came to his line, he seemed to recognize the awkwardness of such polysyllabic phrasing, historian Taylor Branch writes, and decided to speak instead from the heart.

Looking up from his text, he told his listeners:

"Let us not wallow in the valley of despair."

Those on the platform with him knew he had moved off his prepared remarks, and Mahalia Jackson, the great gospel singer, shouted to him: "Tell 'em about the dream, Martin!"

No one knows if King heard her, but he abandoned his text and decided to talk about his dream. And thus was born one of the greatest speeches in world history.

It is a cruel irony of history that the 50th anniversary of Martin Luther King Jr.'s "I have a dream" speech comes a little more than month after the July 13 "not guilty" verdict in the trial of George Zimmerman for the shooting death in February of Trayvon Martin, an unarmed black teen.

Across the nation, African-Americans have responded with deep pain and anger. For instance, on the U.S. Catholic magazine website, Fr. Bryan Massingale published a moving essay in which he describes Trayvon Martin as "a sacrifice at the altar of white fear."

Two of the nation's highest-ranking officials -- President Barack Obama and Attorney General Eric Holder -- spoke publicly of their own experiences as black men suspected, detained and questioned simply because of their color.

"Trayvon Martin could have been me 35 years ago," Obama said.

And he noted the great frustration within the African-American community and the perception "that if a white male teen was involved in the same kind of scenario that, from top to bottom, both the outcome and the aftermath might have been different."

That's a perception that many Americans, regardless of color, share. Just as many Americans agree with Holder that "we still have much to do -- and much further to go."

So it's a sad time to be celebrating King's speech. Yet, it's important to remember King's admonition: "Let us not wallow in the valley of despair."

Consider this: A half century ago, on June 11, 1963, Gov. George Wallace stood at the doors to the University of Alabama in an unsuccessful attempt to block the enrollment, under federal protection, of two black students. The next day, civil rights leader Medgar Evers was assassinated in Jackson, Miss. Just two months earlier, King spent more than a week in jail in Birmingham, Ala., for conducting pro-integration demonstrations.

"Since those days," Holder acknowledged, "our country has indeed changed for the better. The fact that I stand before you as the 82nd attorney general of the United States, serving in the administration of our first African-American president, proves that."

Acknowledging the gains that have been made, however, shouldn't distract us from the work that needs to be done.

As Obama suggested, echoing King, "At least ask yourself your own questions about: Am I wringing as much bias out of myself as I can? Am I judging people as much as I can, based on not the color of their skin, but the content of their character? That would, I think, be an appropriate exercise in the wake of this tragedy."

And that tragedy shouldn't distract us from King's vision. From his dream.

If you watch a video of the address, you can see that, just after warning against wallowing in despair, King stumbled. He started a sentence in one direction, but then headed off extemporaneously in another:

I say to you today, my friends -- and so even though we face the difficulties of today and tomorrow, I still have a dream. It is a dream deeply rooted in the American dream.

I have a dream that one day this nation will rise up, live out the true meaning of its creed: "We hold these truths to be self-evident, that all men are created equal."

I have a dream that my four little children will one day live in a nation where they will not be judged by the color of their skin but by the content of their character.

I have a dream today.

I have a dream that one day down in Alabama, with its vicious racists, with its governor having his lips dripping with the words of interposition and nullification, one day, right there in Alabama, little black boys and black girls will be able to join hands with little white boys and white girls as sisters and brothers.

I have a dream today.

At the time, it seemed to most of his listeners that he was talking about greater equality for American blacks. Yet, what's clear now half a century later is that his dream of freedom wasn't limited.

King's vision was of a world where all people everywhere -- each man, woman and child -- would stand on equal footing, without restraints imposed because of race, ethnicity or some other accident of fate.

And, over the past 50 years, his words have been an inspiration to anyone across the globe seeking to get out from under the boot of an oppressor. And they've been a beacon of promise for those who, like King's fellow blacks, have been seeking equality under the law and in the eyes of society -- women, the disabled, lesbians, gay men, the poor, anyone living on the margins.

Yet, King's dream was even broader than that.

He had the deep religious and human insight that the victims of discrimination aren't just those who are the targets of prejudice. But also those who do the discriminating.

He recognized that those who discriminate isolate themselves from the wisdom, beauty, humor and richness of people who aren't like them. They choose fear instead of love.

In doing so, they harm themselves, and that too, King saw, is the crime of prejudice.

It was a vision for Trayvon Martin and George Zimmerman, for anyone who is oppressed by racial profiling and for all of us who, wittingly or unwittingly, engage in racial profiling.

King was thinking of the victims and victimizers when, as he brought his address to a close, he went through his "Let freedom ring" litany.

And when he came to his stirring conclusion:

[Patrick T. Reardon wrote about urban affairs during much of his 32-year career with the Chicago Tribune.]