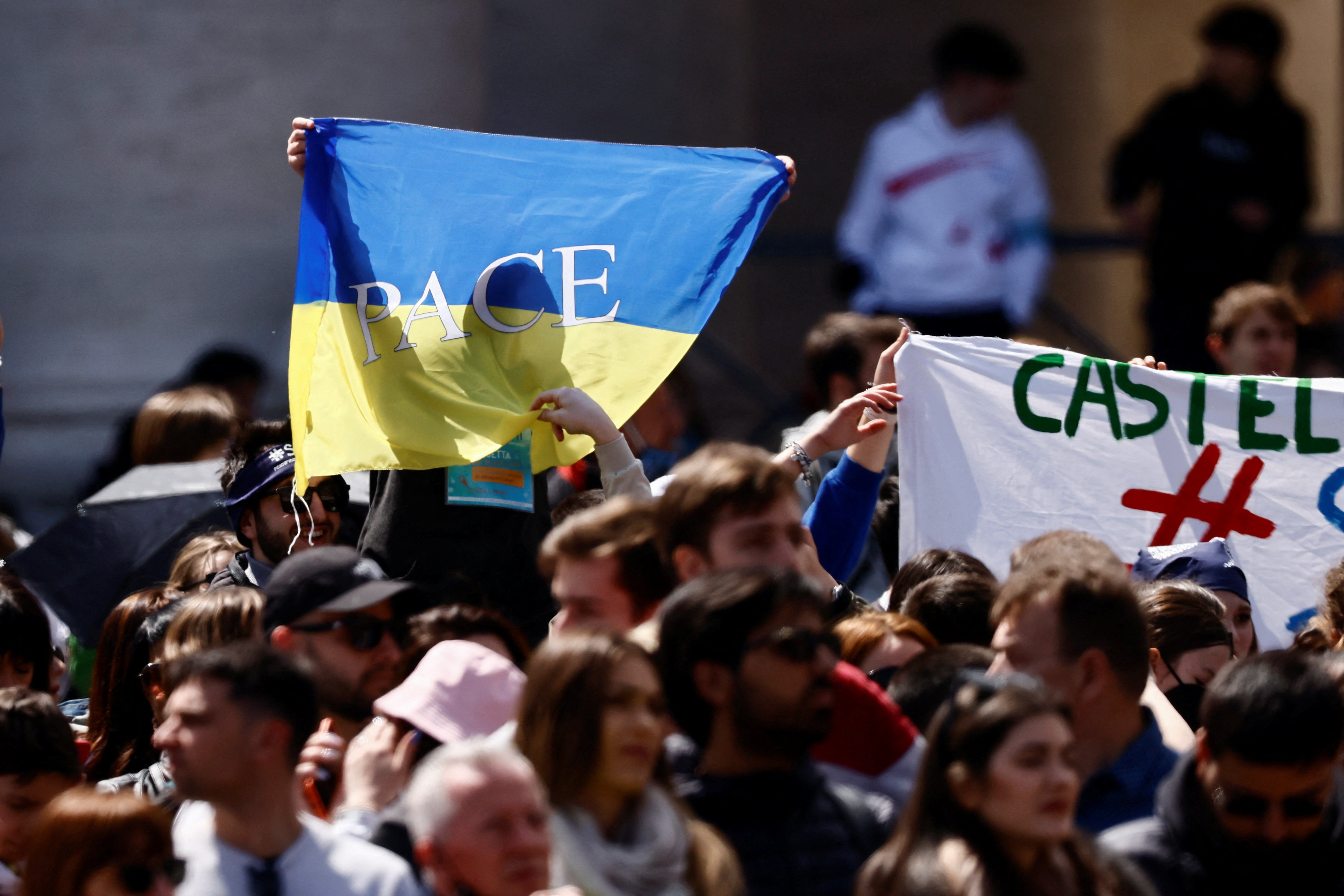 A pilgrim holds a Ukrainian flag as Pope Francis leads the "Regina Coeli" from the window of his studio overlooking St. Peter's Square at the Vatican April 18, 2022. (CNS photo/Yara Nardi, Reuters)

VATICAN CITY — The allure of power and money can be used to proclaim falsehoods and obscure the joyous announcement of Christ's victory over death, Pope Francis said.

"Falsehoods — in words and in life — taint the announcement, they corrupt within, leading back to the tomb," the pope said before reciting the "Regina Coeli" April 18 with visitors in St. Peter's Square.

"The Risen One instead wants us to come out of the tombs of falsehood and dependency. Before the risen Lord, there is another 'god' — the god of money that dirties and ruins everything, that closes the door to salvation," he said.

The pope reflected on the day's Gospel reading from St. Matthew, which recalled the resurrected Christ telling the women who were at his tomb to not be afraid and instructing them to "go and tell my brothers to go to Galilee; there they will see me."

Jesus' words, he said, are "two pieces of advice that would be good also for us to welcome as an Easter gift."

In telling the women to not be afraid, the pope said Jesus knows that "our fears are our daily enemies," especially the fear of death. Yet, by conquering death, Jesus "invites us to come out of the tomb of our fears."

"He knows that fear is always lurking at the door of our heart, and we need to hear ourselves say do not be afraid, fear not on Easter morning; as on the morning of every day, 'Do not be afraid,'" the pope said.

Jesus' instruction to "go and tell" the disciples to meet him in Galilee, the pope continued, is also an invitation for Christians to go out and proclaim the resurrection to those who are closed in by fear.

"The joy of Christ is strengthened by giving it, it multiplies sharing it. If we open ourselves and bear the Gospel, our hearts will open and overcome fear. This is the secret: We proclaim and overcome fear," he said.

However, recalling the money given to the Roman soldiers guarding the tomb so that they would counter the story of Jesus' resurrection, Pope Francis said the belief in their lies shows the power of money, which is "the other lord that Jesus says we must never serve."

"Here is the falsehood, the logic of concealment that opposes the proclamation of truth," he said. "Falsehoods take us backward, they lead right to death, to the tomb."

Pope Francis said that while many are rightly scandalized "when in the news we discover deceit and lies in the lives of persons and society," Christians should also reflect on "obscurity and falsehoods we have in ourselves."

"Let us place our own darkness and falsehoods before the light of the risen Jesus," the pope said. "He wants to bring hidden things to light to make us transparent and luminous witnesses to the joy of the Gospel, of the truth that will make you free."