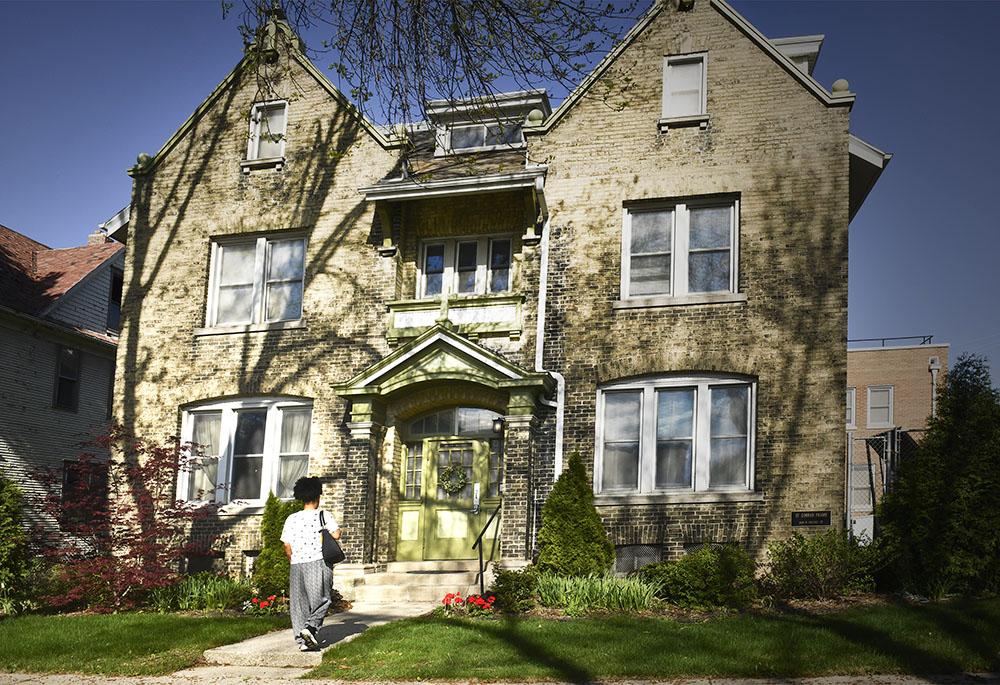 The outside of St. Bakhita Catholic Worker House in Milwaukee, Wisconsin (Courtesy of Anne Haines)

What to do when a global pandemic turns the world upside down? "Open a Catholic Worker house" may not be the first answer most of us would give. But for three groups in Iowa, Kansas and Wisconsin, it was the perfect time to found new worker communities.

Inspired by the model of Dorothy Day and Peter Maurin — who sparked an international movement by opening a house of hospitality in New York in 1933 — workers at Romero House, the Eliza B. Conley House and the St. Bakhita Catholic Worker House are now serving communities across the Midwest.

Day and Maurin undertook various ministries out of the New York house — offering hospitality to the homeless, publishing a 1-cent newspaper, and advocating for social justice and nonviolence causes. In the same way, the founders of each of the new communities have chosen ministries to serve their local neighborhoods.

Each of the founders said there was no better time than now to start their work.

Anne Haines, of the St. Josephine Bakhita community in Milwaukee, told NCR she thinks there is a widespread hunger for the worker movement.

"Young people really want authenticity," said Haines. "They want to see the Gospel witnessed. I hope our house will be a place where we can talk about social issues, where bridges can be built."

Matt Mitchell, of the Romero House in Ames, Iowa, and Kimberly Hunter, of the Eliza B. Conley House in Kansas City, Kansas, pointed to the worker movement's flexibility to serve those in need, and its ability to trust in God.

"If you want to form a community, let God be your guide," said Mitchell. "The reason we are here is God's provision. Think small first, but don't be afraid to leap out. It can happen anywhere." 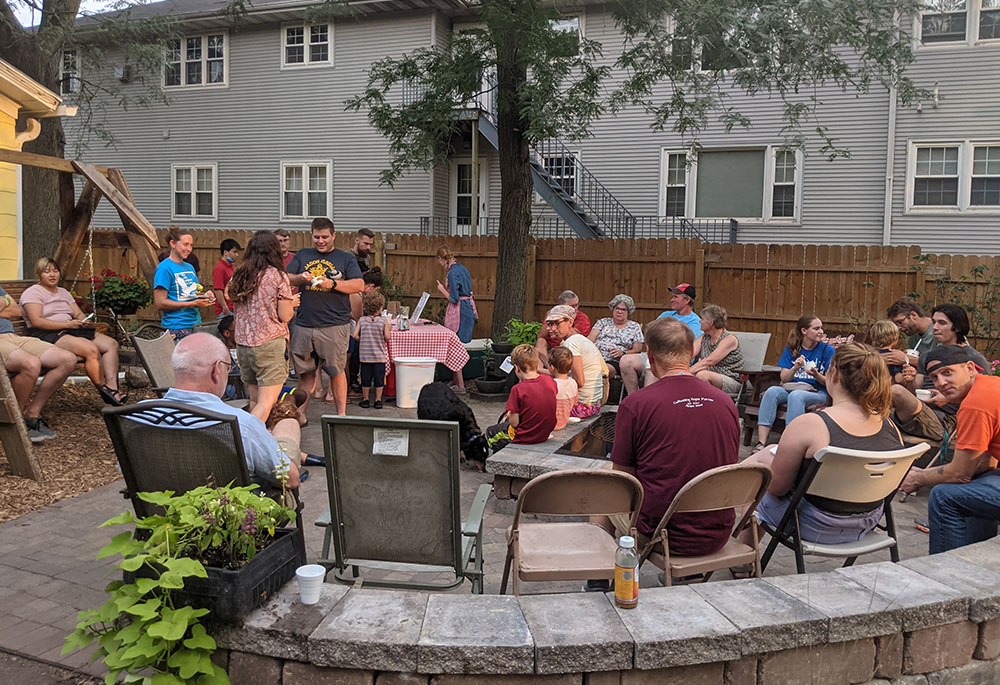 A gathering in the backyard outside at Romero House in Ames, Iowa (Courtesy of Matt Mitchell)

"Meeting a person experiencing homelessness changed everything for me," he explained. "I started reading Dorothy Day and Peter Maurin. I was transfixed by their desire to create community. I felt very much called to be present to the people right in front of me."

A year and a half later, Romero House is up and running with a specific mission of offering long-term hospitality to men coming out of jail or drug treatment.

"We function as a nontraditional family. Some men stay for a few months or weeks; others become permanent community members," Mitchell said.

Mitchell said he prefers the term "live-in" instead of "worker."

"We try to minimize the distinction between [Catholic] workers and guests, to make sure there's no unnecessary hierarchy," he said. 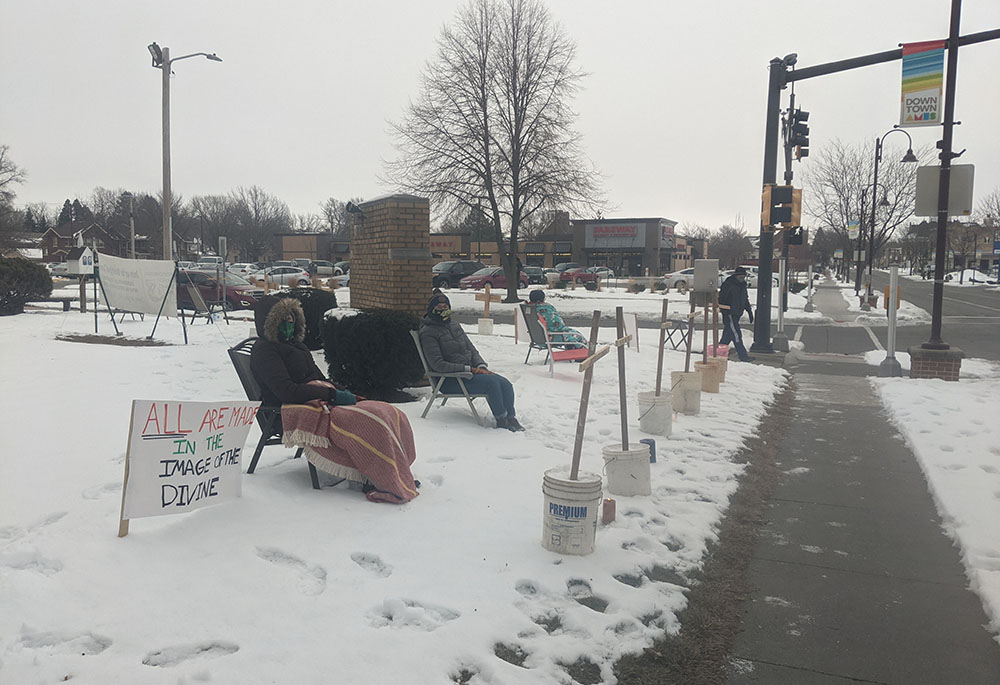 Members of the Romero House community hosted a witness against the death penalty in January 2021 on an intersection in Ames, Iowa. (Courtesy of Matt Mitchell)

At the moment, Mitchell is the only live-in at Romero House, and there are five residents. This May they plan to expand the number of both live-ins and residents. However, the house already enjoys a large amount of community support, including from a mental health counselor who regularly meets with the residents.

Mitchell said he took about a year to raise the money necessary to open the house, and was aided in purchasing the property by the current historically low interest rates. He said he now has a team that helps him with the ministry needs.

"I gathered a team who helped keep the functions of the house going on a day-to-day basis — they don't live in the house, but they are people in the community with a passion for justice," he said.

Mitchell was inspired to name the house after Oscar Romero because of the Salvadoran saint's commitment to justice.

"We named the house as we did because he was working within the church to speak out against injustice," he said. "This is very important to us — to be within the church but call out and be critical of it, as Romero did. Also, he fled the luxuries of being a bishop; he lived among the poor and took on voluntary poverty. He is an icon for us."

In the future, Mitchell hopes that Romero House will get more involved in social justice causes and also open a house for women. They also hope to collaborate more with nearby Mustard Seed Farm, which provides much of their food.

"Our ultimate goal, which we've not realized because of the pandemic, is to frequent the farm a lot more with our residents, to work there during the week to gather food and help families that are struggling," he said.

Before founding the Eliza B. Conley Mennonite Catholic Worker House in Kansas, City, Kansas, which focuses on providing housing for women of color, Kimberly Hunter and Terry Rouse both had prior experience with the worker movement.

Hunter had lived at a worker community in Florida, and Rouse had wanted to focus on affordable housing issues.

They shared similar goals, so when the house — formerly a Mennonite volunteer service house — came up for sale, they decided to buy it, both contributing personal funds and raising money from the community.

Named for the first Native American woman to argue a case before the U.S. Supreme Court, their house has a specific commitment to anti-racist work.

"I am morally opposed to the system of real estate and property ownership we have in the United States," Hunter said. "I feel that if I'm going to participate and own a house, I wanted to balance the harm of being part of the system to undoing other harms of racism and sexism." 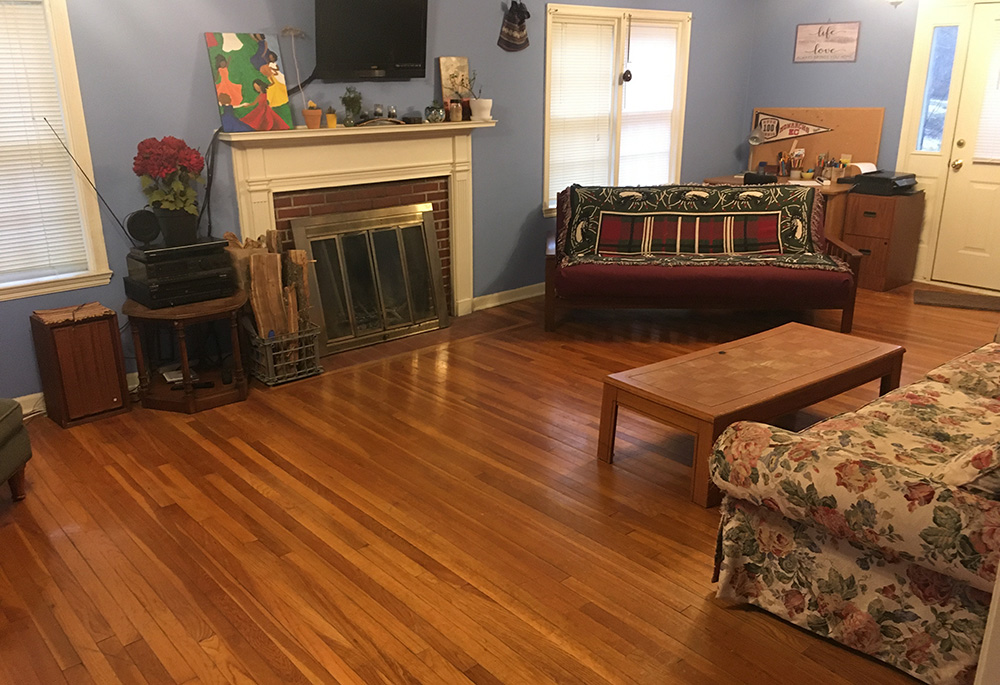 The living room in Eliza B. Conley House in Kansas City, Kansas (Courtesy of Terry Rouse)

"A lot of labor falls onto women of color," she added. "They always confront racism because of who they are. I wanted to offer reparations for that injustice — as well as the historical reasons for why I was able to make an offer on the house and they weren't. I see this as affirmative action in housing, as justice rather than charity."

Hunter and Rouse are currently housing six adults and five children. They are happy that one of their residents, a teacher, has achieved her own dream of buying a house of her own. Goals for the near future involve filling their lawn with plants native to Kansas and tithing 10% of donations to local activist organizations led by people of color.

Right now they are supporting the Heart of America Indian Center, an organization leading Not in Our Honor, a campaign to change the name of Kansas City's football team.

For Anne Haines, starting a Catholic Worker house is a dream she's harbored since age 22. Now that her six children have left home, she feels called to pursue this path.

She and her friend Frank Miller, the son of Day biographer William Miller, wrote a proposal to open a new community and sent it to the Franciscan Peacemakers, a nonprofit in Milwaukee that focuses on human trafficking.

Partnering with the Franciscans, Haines and Miller have started a nonprofit and acquired a building. They plan to open the house officially on May 1, the anniversary of the worker movement's founding. 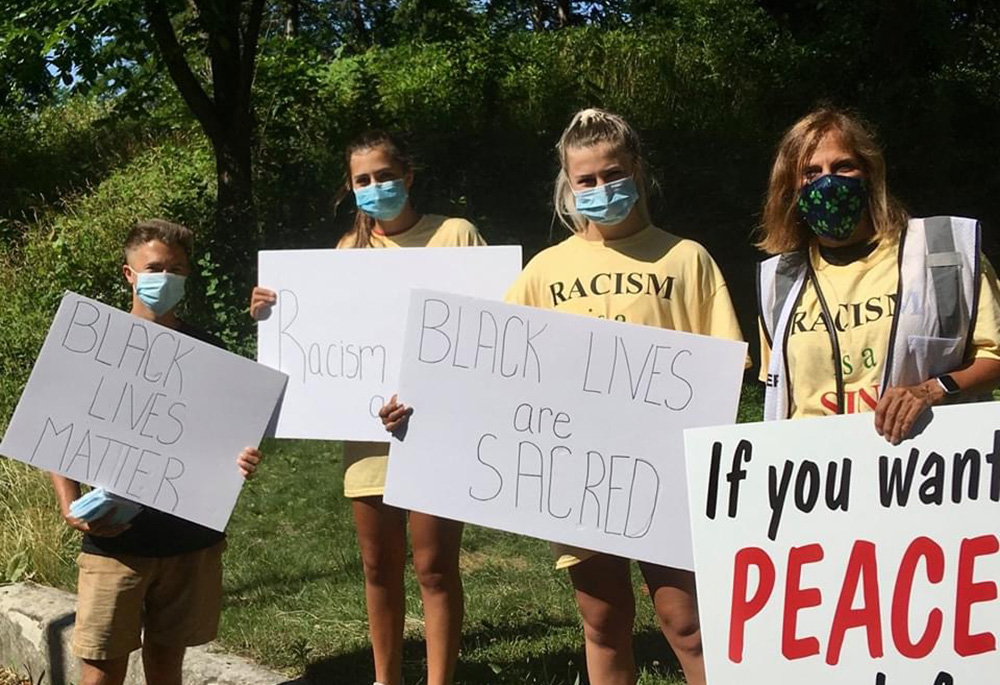 Anne Haines, right, with children Cullen, Danielle and Brianna at a "Black Lives are Sacred" march in Milwaukee (Courtesy of Anne Haines)

"I think we will be in full swing. I'm moving in, and there's another woman who's committed, so we are already growing," said Haines.

Named for St. Josephine Bakhita, a 19th-century Sudanese woman who won her freedom from slavery in an Italian court case, the new community plans to house up to 12 women who are victims of trafficking and/or sexual exploitation.

"We want to provide safe rooms for the women and live in community with them. We want to provide that family nurturing that all of us need," said Haines. "We want this to be a place of education and retreat, promoting Christian personalism, helping people to live their faith as they are called to."

Haines, who became a single mother at a young age, feels a particular call to work with women.

"Milwaukee is a hub for human trafficking, so there is a great need," she said. "What I love is we can offer space for up to two years, which is unusual — it gives women time to deal with addiction and trauma."

Haines said the women will also be able to take part in the Franciscan Peacemakers Social Enterprise program, which offers employment and training in various industries. "They will learn job and financial skills and save money for when they move out," said Haines.