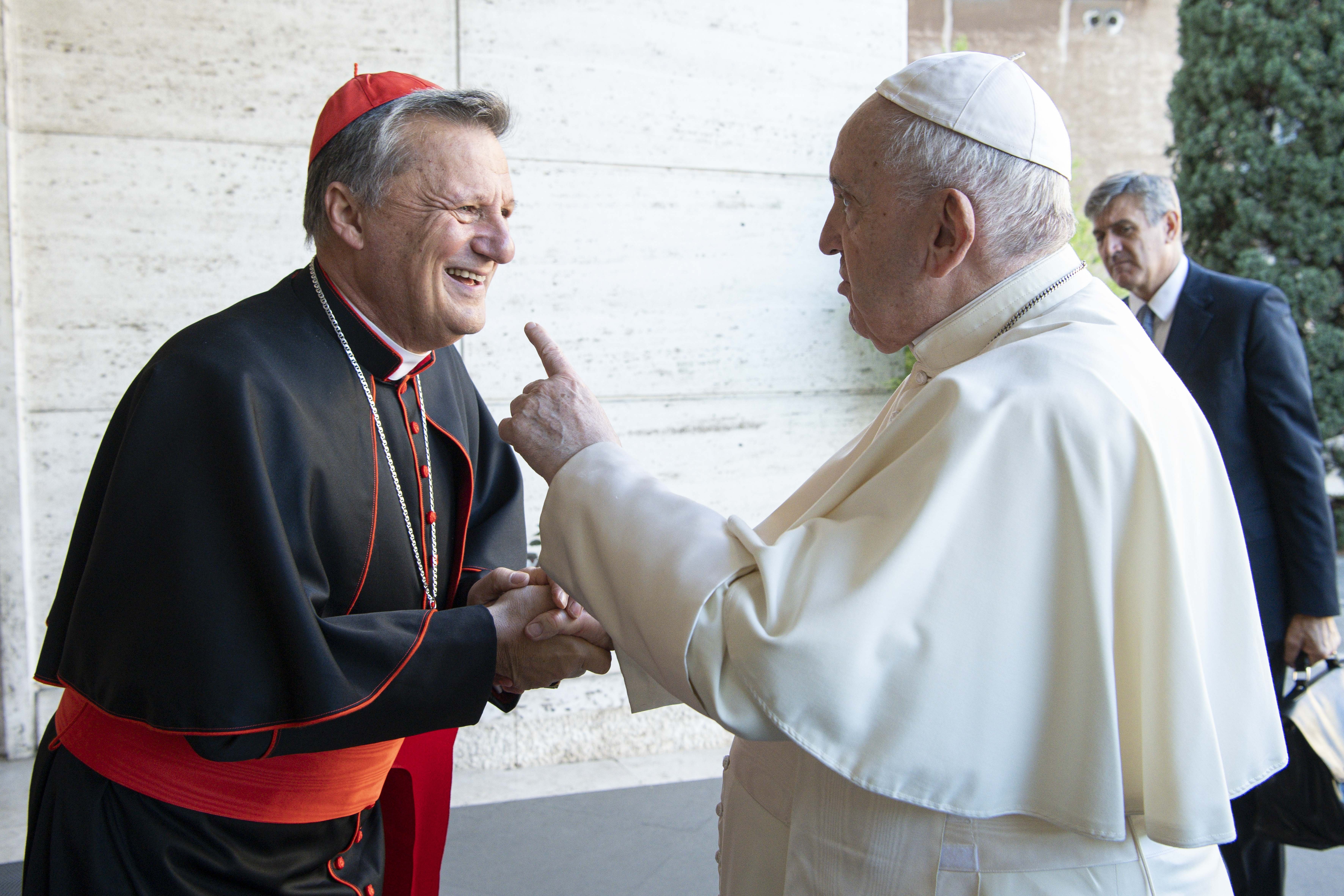 Pope Francis greets Maltese Cardinal Mario Grech, secretary-general of the Synod of Bishops, during a meeting with representatives of bishops' conferences from around the world at the Vatican in this Oct. 9, 2021. (CNS photo/Paul Haring)

VATICAN CITY — Priests should try to help show the true face of the church as an open, welcoming home inhabited by the Lord and enlivened by love, said Cardinal Mario Grech, secretary-general of the Synod of the Bishops, and Archbishop Lazarus You Heung-sik, prefect of the Vatican Congregation for Clergy.

"It is well known that today's world is in urgent need of fraternity. Without realizing it, the world yearns to meet Jesus," they said in a letter to the world's priests, including those who are also bishops and cardinals.

In order to help people encounter Jesus, priests "need to listen to the Spirit together with the whole people of God, so as to renew our faith and find new ways and languages to share the Gospel with our brothers and sisters," they wrote.

That is the precise objective of the synodal process that Pope Francis has proposed — "to set out, together, in mutual listening, in sharing ideas and projects, to show the true face of the church: a hospitable 'house,' with open doors, inhabited by the Lord and animated by fraternal relationships," they wrote.

The letter was released March 19, the feast of St. Joseph, in a number of languages online at www.synod.va. The Catholic Church inaugurated a synodal process, titled "For a Synodal Church: Communion, Participation, Mission" in October 2021. It will lead to a general assembly of the Synod of Bishops in October 2023.

The letter invited the world's priests to play an active role in contributing to the ongoing synodal process, especially through greater involvement of and listening to the lay faithful, those on the "peripheries" and all people of goodwill.

The synodal process, they wrote, "is a novelty that can arouse enthusiasm as well as perplexity," even though practicing synodality, that is, "walking together," was how the church lived in the first millennium.

The cardinal and archbishop listed a number of fears that priests may be experiencing in light of the call for helping make sure the process is fruitful and avoids the risks of being just a theoretical or intellectual exercise in which the Holy Spirit is not heard and nothing changes.

Priests may feel they already have too much on their plate, and the current diocesan phase of the process may seem like just one more thing they have to do, the letter said.

"Rather than inviting you to multiply your activities," priests are encouraged to discover "the many examples of participation and sharing that are already taking root in your communities" and to emphasize and appreciate where there is synodality already in action.

Another fear might be "what will become of our role as leaders and of our specific identity as ordained ministers" with such renewed emphasis placed on "the common priesthood of the baptized and on the 'sensus fidei' of the people of God," it said.

This is about "discovering the fundamental equality of all the baptized and of stimulating all the faithful to participate actively in the journey and mission of the church" as well as helping "the special charism of ordained ministers to serve, sanctify and animate the people of God ... come to the fore in a new way."

"Let us strive to ensure that our journey is marked by mutual listening and mutual acceptance" and is guided by the Word of God, Cardinal Grech and Archbishop You said.

"As pastors, we can do much so that love might heal relationships and heal the wounds that often affect the fabric of the church, so that the joy of feeling that we are one family, one people on a journey, children of the same father and therefore brothers and sisters to one another may return, beginning with the fraternity of priests," they said.

"Synodality is truly God's call for the church of the third millennium. Setting out in this direction will not be free of questions, fatigue and setbacks, but we can be confident that it will return to us a hundredfold in fraternity and in fruits of evangelical life," they wrote.