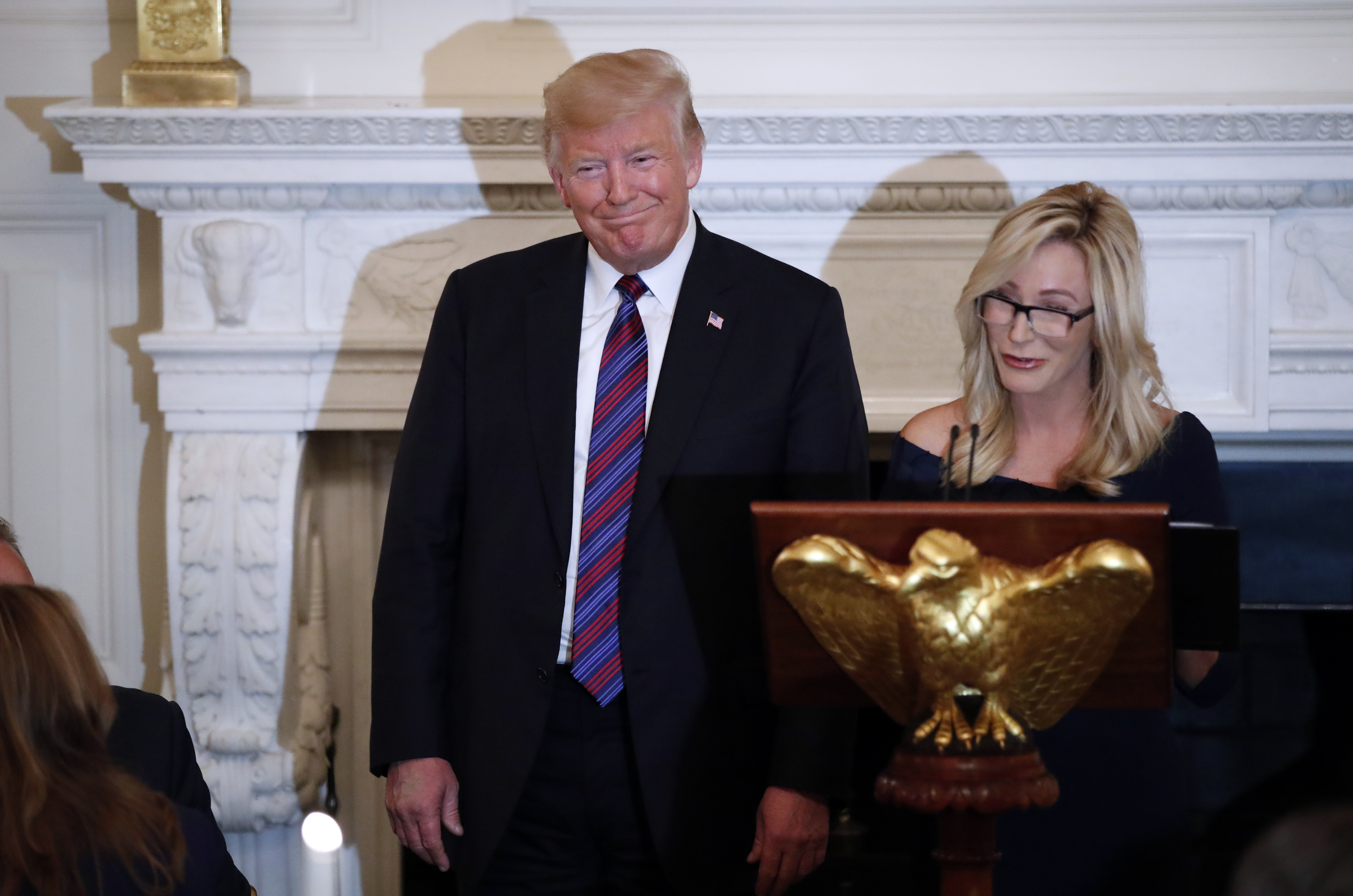 Then-President Donald Trump with pastor Paula White at a dinner for evangelical leaders in the State Dining Room of the White House, Aug. 27, 2018, in Washington. (AP/Alex Brandon)

In another sign Donald Trump is eyeing a run to regain the White House, the former president and his religious advisers announced the launch of a national faith advisory board on Sept. 2, apparently aimed at reinvigorating his conservative Christian base.

The new initiative, first reported by the Jewish news outlet The Forward, was formally unveiled on a conference call organized by Intercessors for America and led by longtime Trump adviser Paula White. The Pentecostal megachurch pastor said the new effort, which includes participation from "70 executives," is intended to continue the "great work that we have done," referring to efforts she oversaw as head of the Trump White House's faith-based office.

White drew parallels to the creation of a previous "faith advisory board," a likely reference to a group of largely evangelical Christian leaders who advised the 2016 Trump presidential campaign and operated as an informal council on religion matters throughout his presidency.

"It grew to the most robust coalition in modern-day history," White said of the board's work. "Our unity brought unprecedented victories, influence and access."

Trump took up most of the rest of the call with lengthy remarks in which he oscillated between critiquing President Joe Biden's record on faith-based issues — "a lot of things have happened with respect to faith and religion, and they're not good things" — and praising his own tenure, saying, "One of my greatest honors was fighting for religious liberty and for defending the Judeo-Christian values and principles of our nation's founding."

He listed various Trump administration accomplishments popular with conservative Christians, such as designating Jerusalem the capital of Israel, founding a new White House faith office, declaring churches "essential" during the coronavirus pandemic and appointing conservative judges to the federal bench and the Supreme Court.

Trump alluded to the decision by the Supreme Court not to block a controversial Texas abortion ban, saying, "Even last night, you're getting some very powerful decisions, more powerful than anybody would have thought."

He also reiterated the claim he "totally obliterated" the Johnson Amendment, a section of the U.S. tax code that bars religious groups and other nonprofits from endorsing candidates. (Trump's 2017 executive order sought to hinder its enforcement but did not eliminate the statute.)

Trump then fielded questions from leaders of various faith organizations — most of which are focused on politics — including Jason Yates, CEO of My Faith Votes; Brian Burch, head of CatholicVote.org; Dave Kubal, head of Intercessors for America; Rabbi Yaakov Menken, managing director of the Coalition for Jewish Values; and Dave Donaldson, co-founder of CityServe.

In answering their questions, Trump criticized Biden's withdrawal from Afghanistan, calling it "a mad rush" and bemoaning the Taliban's seizure of U.S. military equipment.

"One of my greatest honors was fighting for religious liberty and for defending the Judeo-Christian values and principles of our nation's founding."

Trump referenced hypothetical future scenarios "if we're able to get back in," while repeating the widely discredited claim the 2020 election was "stolen" from him. In discussing the Catholic vote, he acknowledged he had lost ground with the bloc in his four years in office.

According to a recent election analysis published by Pew Research, Trump drew support from 50% of Catholics overall in 2020, a dip of 2 percentage points from 2016 (Biden took 49%, up from the 44% Democratic contender Hillary Clinton claimed in 2016).

The shift was more dramatic among white Catholics, a key constituency in battleground Rust Belt states: Trump's share of that vote dropped from 64% to 57% between 2016 and 2020, whereas Biden won 42% — an 11-percentage-point improvement over Clinton in 2016.

The former president expressed frustration with the lack of support from Jewish voters, despite his administration's support of Israel. "Look what I did with the embassy in Jerusalem and what I did with so many other things. … Israel has never had a better friend, and yet I got 25% of the vote," Trump said. "I think they have to get together. There has to be a little bit more unity with the religious groups all represented on this call."

Polls of Jewish voters during the 2020 election varied, with a Republican Jewish Coalition survey finding 30% support for Trump and a separate poll conducted by liberal group J Street reporting just 21%.

Trump made similar remarks while answering a question from Yates of My Faith Votes.

"I'm a little bit surprised that we didn't do better with the Catholic vote."

Trump, a former Presbyterian who converted to nondenominational Christianity near the end of his time in office, was also asked directly about his belief in God.

"It's all based around God — it's so important," he replied. "God is so important to the success of what we're doing. Because without God, we have nothing."

The call ended with a prayer from Robert Morris, pastor of Gateway Church near Dallas, which Trump visited during his 2020 campaign. Morris was among the religious leaders who gathered in the White House Rose Garden to celebrate Amy Coney Barrett's nomination to the Supreme Court in September of that year, a maskless affair later called a COVID-19 spreader event.

Morris prayed for Trump and his family, saying they "have taken more of an attack from the enemy than any president we can ever remember." He added: "And yet, Lord, he continues to stand strong for Jewish people, and for Christians, and Lord, for the Judeo-Christian foundation of our nation."

Morris then closed by echoing Trump's criticism of Biden and reiterating the debunked suggestion the election was "stolen."

"I pray for those Americans that voted the wrong way," he said. "I pray, God, that they would see what … poor administration, what that does to a great nation. I pray, Lord, that you will do something even, also, Lord, for our election system. That we will never have another election stolen from the American people — from the American people. We should be concerned about that. So Lord, whatever we need to do to fix the electoral process, I pray for that."

As the session ended, White told listeners there would be monthly calls and to keep an eye out for "instruction."

"Thank you for this unity coalition that has always had such influence and power to move things," she said. "We are in a great battle, but I sense we have the ability to bring some great victories."