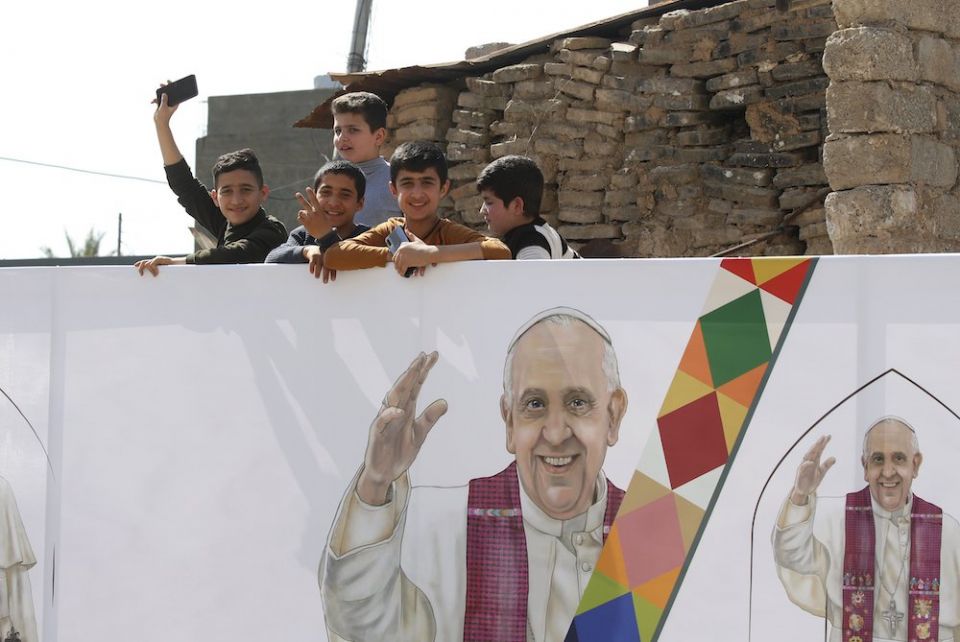 Children are seen near an image of Pope Francis during the pope's visit with the community at the Church of the Immaculate Conception in Qaraqosh, Iraq, March 7, 2021. (CNS/Paul Haring)

Pope Francis' historic visit to Iraq last March left an enduring impact and helped spark hope among a population that has suffered years of violence, a cardinal who is one of the Catholic Church's leading experts on Christian-Muslim relations told a May 6 webinar.

"This visit changed the mentality of people," Cardinal Michael Fitzgerald, the former head of the Pontifical Council for Inter-religious Dialogue said at the event, co-hosted by two centers at Georgetown University and the Rome-based Pontifical Institute for Arabic and Islamic Studies.

Fitzgerald said the pope's March 5-8 visit, the first of a pontiff to Iraq, "touched the hearts of all Iraqis."

"This was the first time they could hear and see the pope," said the prelate, who was made a cardinal by Francis in 2019. "After years of destruction, we heard a message of peace and fraternity."

Also speaking during the webinar was Cindy Wooden, the Rome bureau chief of Catholic News Service, who was among the journalists who traveled to Iraq with Francis.

"There was this sense that it was something huge and something special," Wooden said of the significant and continuous media coverage the trip attracted.

Events of the pontiff's visit, including his ecumenical gathering at the ruins of the historic city of Ur, were attended by people from a wide variety of faith backgrounds, which Wooden said demonstrated "the vitality and variety of the Christian communities, and the fact that there are so many different religious traditions in Iraq."

Wooden also addressed concerns expressed by some healthcare professionals about Francis' choice to travel during an ongoing pandemic.

"[The pope] said the COVID rate was a concern, but even if most Iraqi Christians had to see the pope only on television, they would know he was in their country and cared enough to visit," she said, referring to the fact that many of the events were limited to small groups in hopes of avoiding contribution to climbing infection rates within the country.

His visit to Iraq will not be the only one that Francis is seeking to make within the year.

Fitzgerald affirmed that the pontiff is still hoping to visit South Sudan in tandem with Archbishop Justin Welby, the head of the global Anglican communion, as has been in planning for years.

Francis will also likely continue his trend of visiting countries in the Middle East that are distressed by war and persecution, Fitzgerald speculated. Francis told journalists aboard the papal flight home from Iraq that he is already planning a voyage to Lebanon.

Fitzgerald told the webinar the pope hopes to connect with both Shiite and Sunni Muslims. "I hope because the Shiite community is important in Lebanon, he will have contact with Shiite as well as Sunni Muslims," said the cardinal.

"Pope Francis likes to go to places where people are suffering," he said, referencing the pontiff's first trip out of Rome to Lampedusa, where he prayed with and for migrants who sought freedom, even at the cost of their lives.

This prioritization of countries that are suffering with war and persecution are beneficial catalysts to religious dialogue and efforts to unification, Fitzgerald continued. "The pope is ready and eager to enter into relations with all branches of Islam."

Fitzgerald referred to Francis' first-of-its-kind meeting in Iraq with Grand Ayatollah Sayyid Al-Sistani, one of the most eminent clerics in the Shiite Muslim tradition.

"He wanted to give a message of peace for all Muslims," Fitzgerald said in reference to Francis' continued efforts to interact with both major Muslim traditions, meeting with Sunni and Shiite leaders.

When the floor opened for audience questions, a primary concern for participants was their own ability to be involved in ecumenical and inter-religious relations. The unified answer from both Fitzgerald and Wooden was simple: Follow the example of the pope.

"In the COVID environment, be patient and be prudent," said Fitzgerald, "but once this is over, make contact with people of other religions. Get to know them."

Fitzgerald, who also previously served as the Vatican ambassador to Egypt, suggested attending a different place of worship, with proper precautions in light of an ongoing pandemic, and asking questions as well as extending invitations and offering answers about one's own tradition.

The cardinal concluded with a blueprint for immersion in inter-religious communication: "[Inter-religious dialogue] requires open-mindedness, courage and patience. You cannot do anything without patience — you have to wait for it and long for it."

[Colleen R. Schena is a freelance journalist in northern Indiana and a 2021 alumna of Marian University Indianapolis.]