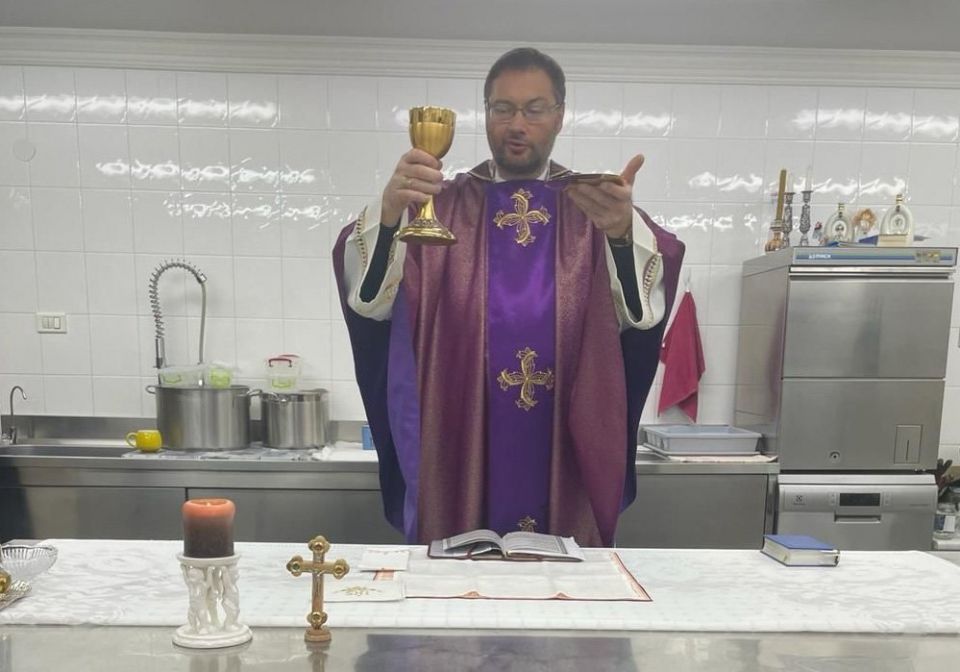 Vatican City — The Russian invasion of Ukraine is not just a tragic conflict between two nations, but the center of a spiritual battle wrought by the forces of evil that have pitted brother against brother, said the apostolic nuncio to Ukraine.

"Like Pope Francis has underscored, any war -- (including) this concrete war -- is an invention of Satan, it's an evil invention," Lithuania-born Archbishop Visvaldas Kulbokas told Catholic News Service by phone March 21.

"If God allowed such things to happen," he said, it is not a call to point fingers of blame, but instead to understand "what God wants to tell us through such experiences."

"I would say that I am feeling like I am in the epicenter of a spiritual challenge," Archbishop Kulbokas said.

Since Russia invaded Ukraine Feb. 24, Archbishop Kulbokas has remained at the nunciature in Kyiv, having the "privilege to be an element of union between the suffering of the Ukrainian people" and the solidarity of the global Catholic Church.

In his Angelus address March 20, Pope Francis expressed his gratitude to church personnel, who remained in the country "for the concrete support you are offering courageously to so many desperate people."

"I also think of the apostolic nuncio -- who was just made a nuncio -- Archbishop Visvaldas Kulbokas, who since the beginning of the war has stayed in Kyiv together with his collaborators and who with his presence brings me close every day to the martyred Ukrainian people," the pope had said.

Archbishop Kulbokas told CNS that he has felt and continues to feel the pope's "presence, his heart, here," and he believes the pope is "one of the important voices, spiritual voices" that are needed in this time.

Despite the tragic situation, especially in areas of the country devastated by Russian bombs, the nuncio said necessities like heating, electricity, internet and phone lines are still functioning at the nunciature in Kyiv.

Yet, being able to work under the constant threat of bombardment, has proven challenging at times, especially when "there is an air-raid alert and we must hide ourselves in the basement."

The archbishop also said he celebrates daily Mass in the kitchen, which is in an area of the nunciature that is well-protected from potential bombings.

"Psychologically, of course, it's a dramatic situation, but it also has a spiritual dimension," Archbishop Kulbokas said. "It's even a grace of God to live in this situation because this kind of situation I think pushes us to -- I don't want to say to pray or to believe more -- but to identify ourselves more with God, with people and pushes us to read more attentively what the Lord is saying to us. So spiritually speaking, it is a profound experience."

Nevertheless, the Lithuanian archbishop said he remains hopeful, especially for the scheduled March 25 consecration of Russia and Ukraine to the Immaculate Heart of Mary, which he believes is, first and foremost, a call for personal conversion.

Much like in the Book of Revelations, which describes in eschatological terms "this battle between Satan and the Virgin Mary who is protected by God himself," another purpose of the consecration is that through "God's help, the Virgin Mary and the Immaculate Heart of Mary is able to protect the world from the devil's actions," he said.

"When we unite our humble, contrite hearts with the Immaculate Heart of the Virgin Mary, then we have this protection against the devil's forces," Archbishop Kulbokas said. "I would say she will win the war because we need to win peace. It's something much more than an intercession."

While the outcome of the war remains uncertain, Archbishop Kulbokas told CNS that he is hopeful that Ukraine will be a "spiritual winner after such suffering" and through the unity and solidarity among the various religious confessions in the country.

"The solidarity I am perceiving here in the country gives me a great hope for the future of Ukraine," he said. "But the cost is very high: the death of children, of pregnant mothers and the military, of course."

Nevertheless, Archbishop Kulbokas said that while Russia's invasion "should be stopped as soon as possible because it is an evil war," the consecration serves as a reminder that "all of us need to humbly convert ourselves" and not judge others.

"Russia should not have started such a war, that is very clear," he said. "But we should avoid any kind of hate, otherwise we are no longer Christian, I would even say no longer a religious person, because all of us are brothers and sisters if we believe -- and I believe -- that our God is a father for everybody."

"In this sense, we have no right to judge," he said. "We judge only the actions, we reject the evil actions, but we should not develop hate in our hearts."