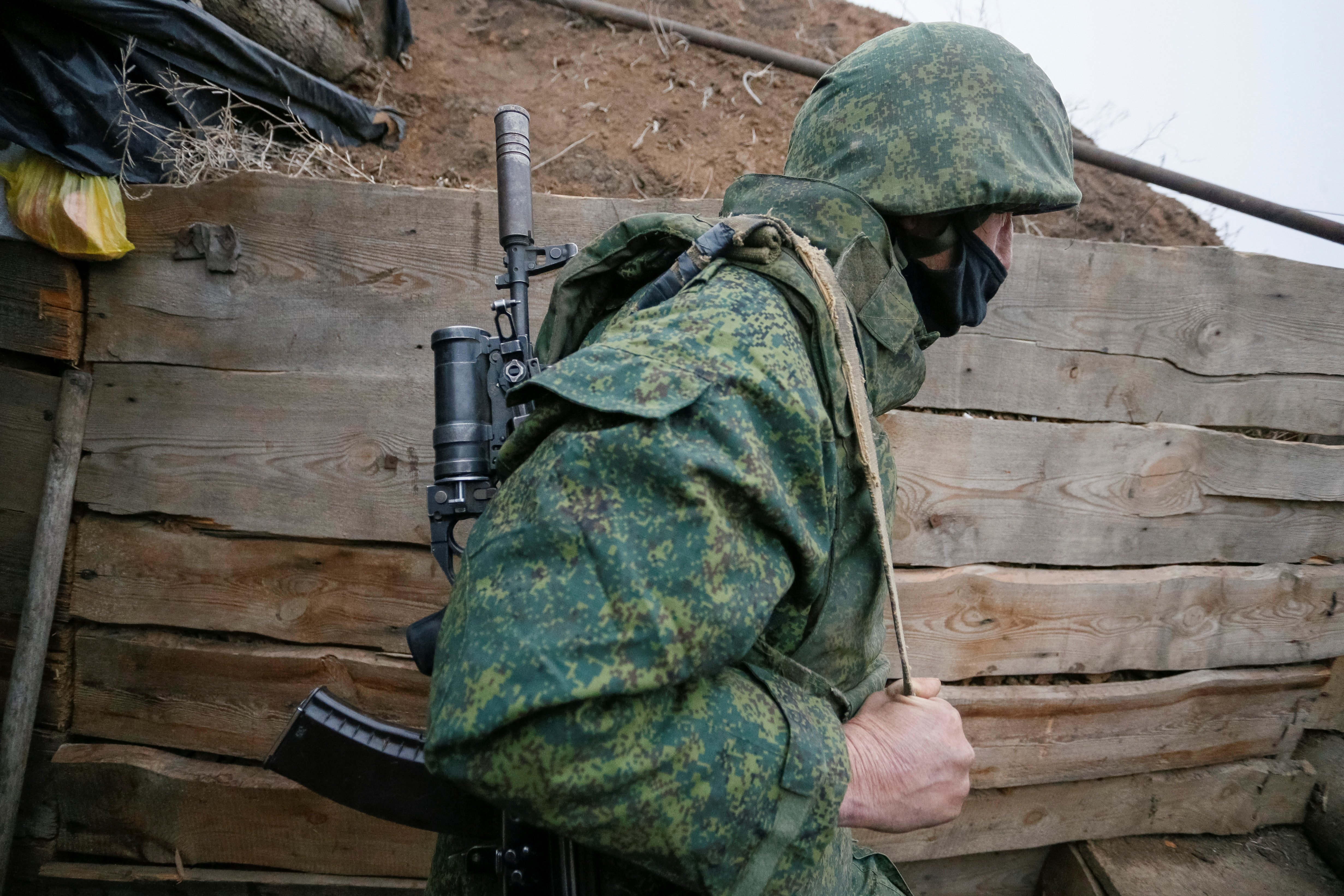 A militant of the separatist Donetsk People's Republic is seen at frontline positions located on the troops contact line with Ukrainian forces near the Ukrainian village of Leninsko Dec. 18, 2020.(CNS photo/Alexander Ermochenko, Reuters)

"People are overwhelmed with a great fear, and this is normal in the face of such danger" as Russia continues to deploy troops all along its border with Ukraine and as the United States and other NATO countries place troops on notice for possible deployment, the archbishop told Catholic News Service Jan. 25.

At the same time, he said, "as Christians, we possess hope of the victory of good over evil. We especially pray for those who want to harm our people, that the Lord will avert their evil intentions and guide them to the path of peace."

The archbishop, his faithful and all Ukrainians, he said, are grateful to Pope Francis for setting Jan. 26 as a day of prayer for peace in Ukraine and for his constant prayers for an end to the fighting that began in 2014 between Russian-backed separatists and Ukrainian forces in Eastern Ukraine.

The fighting, he said, has amounted to "a silent war: it was not often mentioned in recent years, and the voice of the Holy Father was virtually the only one which called for peace and called to mind this bleeding wound in central Europe."

But now "the situation is especially critical," he said in a written response to questions. "We perceive a real threat from Russia in the form of a full-scale invasion of our country."

Calling for a day of prayer, Pope Francis expressed his concern that the tensions on the Ukrainian-Russian border could "put into question the security of the European continent, with even wider repercussions."

"It is clearer than ever that the war in Ukraine is not just a war against Ukraine, and therefore not just a problem for Ukrainians," Archbishop Shevchuk said. "It is obvious that, today, Europe is facing the worst security crisis in decades," and the pope "realizes how dramatic possible scenarios could be for the whole European continent."

Of course, he said, "in union with millions of Christians around the world, the faithful of our church in Ukraine and in the lands of immigration," will mark the day of prayer for peace. From 9 a.m. to 9 p.m., he said, The Ukrainian church's Zhyve TV will broadcast a "prayer telethon" live, including on its YouTube channel.

"We will respond to the call of the Holy Father by our belief that prayer is stronger than any weapon," the archbishop said.

In a video message asking Ukrainians to pray, the archbishop told them: "When new dangers arise and the enemy is on our doorstep, our military checks their combat efficiency, statesmen work to streamline social mechanisms, diplomats work to ensure that the world supports our people and our state. And what do Christians do? Christians pray, fast and repent of their sins."