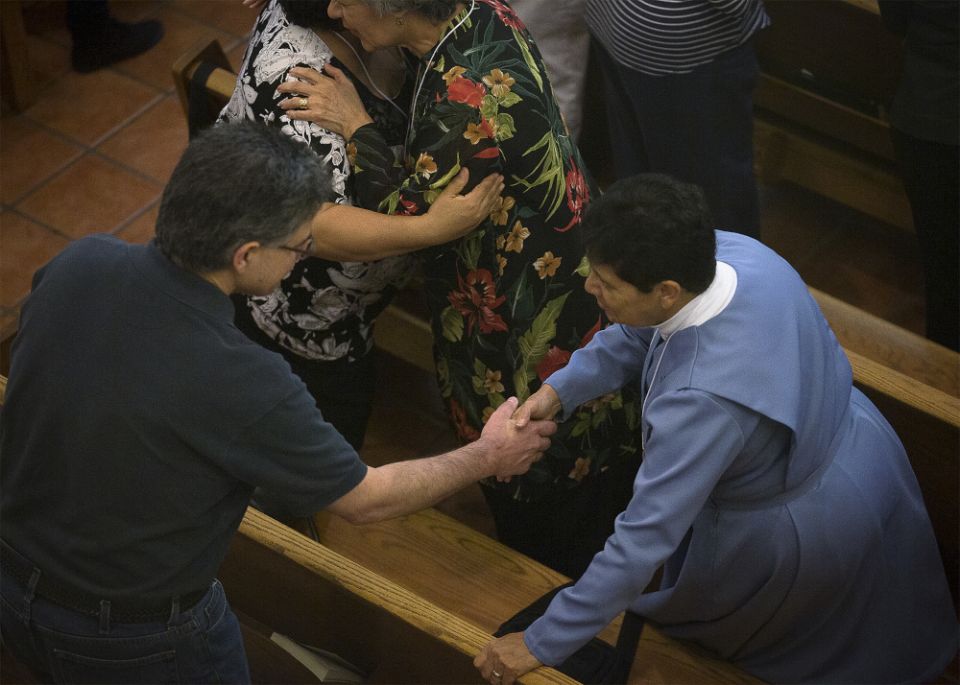 People exchange the sign of peace during Mass at St. Pius X Church in El Paso, Texas, Sept. 23, 2019. Dioceses nationwide are taking precautions to guard against the spread of the coronavirus and reminding parishioners to take commonsense steps related to hygiene in their personal lives. (CNS/Tyler Orsburn)

Washington — Dioceses nationwide are taking precautions to guard against the spread of the coronavirus and reminding parishioners to take commonsense steps related to hygiene in their personal lives.

Among the most common preventative measures being taken are urging reception of holy Communion in the hand, suspension of distribution of the Communion cup and exchanging the sign of peace without physical contact.

Diocesan leaders also asked people who are ill to refrain from attending Mass.

"If you are sick, stay home until you are feeling better," Bishop David Zubik of Pittsburgh said in a March 2 announcement to parishioners.

From Charlotte, North Carolina, to Honolulu, diocesan officials were implementing steps recommended by the U.S. Conference of Catholic Bishops' Committee on Divine Worship to limit the potential spread of the illness that by March 3 had reached about 70 countries including the United States. Health officials in the U.S. have confirmed more than 100 cases of the illness in 15 states, including at least nine deaths.

Among other practices recommended by the bishops’ conference was suspending public liturgical celebrations in areas where the virus has been more prevalent.

In the state of Washington, where all nine deaths have occurred, Seattle Archbishop Paul Etienne issued precautionary directives in a letter to parishes March 2, writing, "Our response to this spreading virus must reflect how we, as disciples of Jesus, express our love of God and neighbor."

In addition to the preventative measures during the liturgy, Etienne also encouraged parishes to disinfect surfaces people touch after each Mass and recommended draining all holy water until further notice.

Worldwide by March 3, more than 92,000 cases and more than 3,100 deaths have been attributed to the coronavirus, with most in China, the epicenter of the outbreak.

At the same time, at least one bishop urged calm as people responded to the coronavirus, designated COVID-19 by world health authorities.

"Please encourage your communities during this time of uncertainty to prepare, but not panic," Auxiliary Bishop Joel Konzen, administrator of the Archdiocese of Atlanta, said in a Feb. 28 memo. He said precautions preventing the spread of COVID-19 were similar to those to prevent the spread of flu.

Like diocesan officials across the U.S., Jugis encouraged priests not to extend the sign of peace, distribute Communion from the cup or invite people to shake hands in greeting at Mass or other gatherings. Those who distribute holy Communion should wash their hands before Mass and clean their hands again before and after distributing Communion, he said.

Similar precautions were being implemented in the Archdioceses of Washington, Chicago and Baltimore and the dioceses of Jackson, Mississippi, and Little Rock, Arkansas.

Beyond those steps, the Archdioceses of Miami, Seattle, Chicago and Baltimore suggested that parishes empty the holy water fonts at church entrances. The Archdiocese of Miami is allowing extraordinary ministers of holy Communion who feel uncomfortable in carrying out their ministry to temporarily step down.

Guidelines from the Ohio Department of Health for dealing with contagious illnesses were reviewed in a statement shared with parishes and posted on the Diocese of Cleveland's website March 2.

Archbishop John Wester of Santa Fe, New Mexico, updated liturgical practices introduced in January because of the severity of the flu season in Utah. In a March 3 statement, he mandated that holy Communion be received in the hand.

"What is important is that we receive our Blessed Lord in holy Communion," he said. "How we receive, while very personal to the individual communicant, is not crucial. ... Receiving Communion in the hand is every bit as respectful as receiving on the tongue."

At the U.S. Conference of Catholic Bishops, Msgr. J. Brian Bransfield, general secretary, March 3 requested in an email to staff that they "refrain, until further notice, from planning any new international travel."

He called on workers who had already purchased tickets for travel to "reconsider the necessity of the trip in consultation with your senior staff supervisor and determine an appropriate plan of action."

Along those lines, the Archdiocese of New York issued a new policy for diocesan schools, effective March 2, requiring students and school personnel returning from international travel to get written medical clearance from a licensed physician before returning to school.

Meanwhile, the Diocese of Honolulu in mid-February declined to put in place any restrictions at Mass. However, Fr. Pascal Abaya, rector of the Cathedral Basilica of Our Lady of Peace in the Hawaiian capital told worshippers the Communion cup would no longer be distributed, a step he called "precautionary" during flu season.

The practice continued during the first week of Lent, a diocesan official confirmed.

Editor's Note: Guidelines developed by the USCCB for influenza and liturgy are posted online at www.usccb.org/prayer-and-worship/sacred-art-and-music/influenza-and-the-liturgy.cfm.

A version of this story appeared in the March 20-April 2, 2020 print issue under the headline: Dioceses adopt wide-ranging plans to limit spread of coronavirus .

Back to school with books, masks and liability waivers

Confession by Zoom? Pandemic revives conversation about reconciling from afar