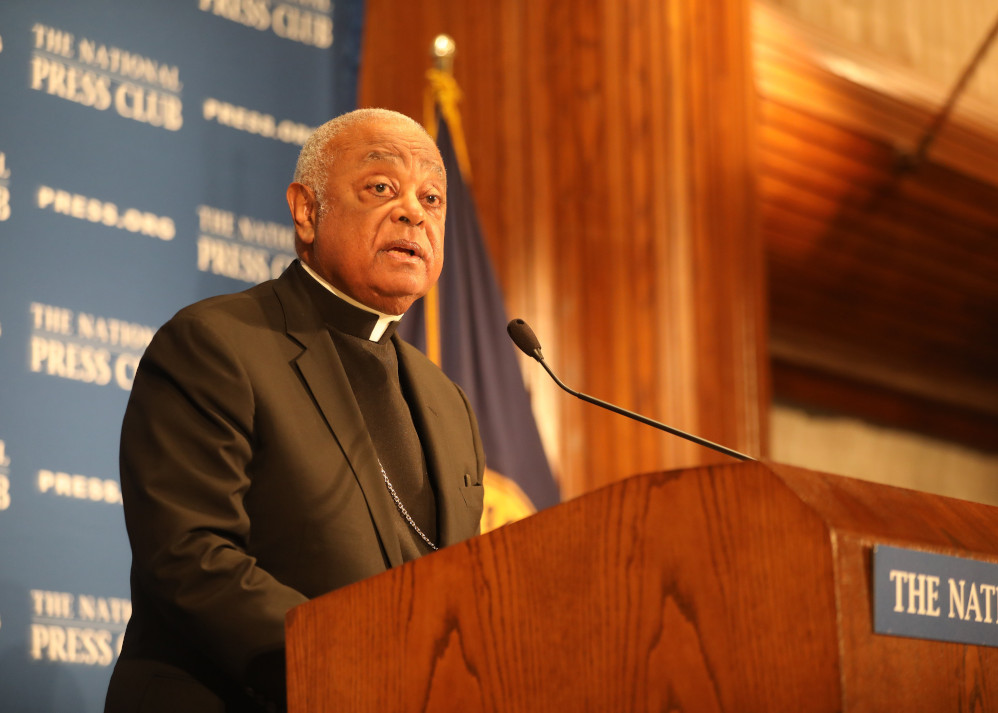 In his first appearance at the National Press Club as archbishop of Washington, Cardinal Wilton Gregory on Sept. 8 emphasized the importance of protecting the environment and upholding the dignity of human life at all stages.

He also answered questions on issues ranging from whether women will ever be ordained Catholic priests -- "I don't see it changing" -- to affirming that seeking healing for victims of clergy sexual abuse should be the first priority, and spoke about President Joe Biden's stance on abortion.

Gregory took questions from the moderator and the press club's president, Lisa Nicole Matthews of The Associated Press, for more than half an hour, following prepared remarks that thanked the news media for their work keeping the world "informed, updated and connected as a global community."

He noted that "words have the incredible power and ability to build, to damage or destroy" and he challenged the news industry and all people "to use our daily words, social media posts, public commentary and personal involvement to care for our neighbors in tangible ways that work for justice at every level."

He said "civility and respectful dialogue for the purpose of earnest understanding can and should be promoted, most especially when we hold different or even opposing political, religious or other opinions."

The cardinal also pointed to Pope Francis as an inspiration in welcoming immigrants and protecting the Earth.

In the question-and-answer session, he showed his vaccination card when asked about those who cite faith-based concerns for hesitating or refusing to get a COVID-19 vaccination. He noted that both Francis and retired Pope Benedict XVI have received the vaccine, and Francis regularly encourages people to get it.

Such support from the highest levels of the church doesn't diminish the concerns of those who hesitate, he said, "but it certainly puts their concern on a pretty shaky platform."

When asked about the church's procedures to prevent and address sexual abuse by priests he said he is embarrassed when cases like that of former cardinal Theodore McCarrick are revealed, "because it is absolutely contrary to everything that I as a priest, my brother priests and bishops, should be pursuing in terms of serving our people."

Gregory said that when McCarrick pleaded not guilty Sept. 3 to charges that he sexually molested a young man decades ago, his first thought was "what about the people that he had hurt."

"The people who should get our sorrow and our concern and our compassion are those who are hurt. Those that hurt them, the perpetrators, should be held to the same criminal justice that anyone who creates such a scandal should be held," he said.

The cardinal was president of the U.S. Conference of Catholic Bishops in 2002 when news exploded about sexual abuse cases involving priests. That summer, the USCCB crafted the Charter for the Protection of Children and Young People.

He said initially the focus was on how the church should be protected or how clergy should be addressed but now church leaders are realizing that the first emphasis should be on how to care for those who have been hurt.

"We're still trying to do that," he added.

In the question-and-answer session, the cardinal said he is "still trying to figure that out" what benefit he brings to the church as the first Black American cardinal.

In light of last year's national focus on race reconciliation after the killing of George Floyd, he noted that all Catholics "have a responsibility because of our faith to be on the forefront of the justice movement."

He said Biden "is not demonstrating Catholic teaching" with his recent response in a news conference about when human life begins. The president, discussing a new Texas law that bans abortions after six weeks, said: "I respect those who believe life begins in the moment of conception -- I respect that... (I) don't agree, but I respect that."

Gregory said the church teaches human life begins at conception. He noted that he served as an auxiliary bishop with the late Chicago Cardinal Joseph Bernardin, who emphasized the "consistent ethic of life, which says that life issues are linked."

Gregory also criticized the death penalty, saying: "We've discovered over time, it's not always equally applied. The poor, people of color, immigrants are more susceptible to having death penalty sentences handed down than the wealthy affluent who can afford the best legal defense available."

He also said there have been "too many cases where people have been sentenced and unfortunately put to death, and with the development of scientific research, it's been proven, or at least been raised to a serious doubt, that maybe the trial itself has been flawed."

When asked whether women would be allowed to become priests, he responded succinctly: "The answer is no." When he was asked further about it he said: "That's our belief, our custom, our practice, and I don't see it changing."

In response to a question about whether the recent wars, earthquakes and the pandemic meant the world is in the "last days" as referenced in Scripture, he replied: "I don't think so."

"What we're doing is experiencing the opportunity, the necessity, of taking charge of our environment more effectively.," he said.

"Whether you are a proponent of climate change or energy programs that step away from fossil fuels, you have to acknowledge that if we don't get a handle on this, things are going to get worse," he added.

[Contributing to this report was Mark Zimmermann. Zapor is senior correspondent and Zimmermann is editor of the Catholic Standard, archdiocesan newspaper of Washington.]