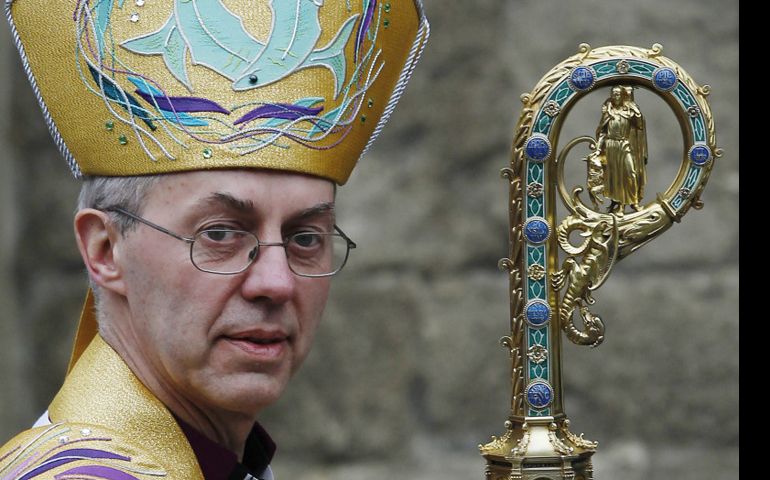 Archbishop of Canterbury Justin Welby, after his enthronement ceremony at Canterbury Cathedral, in Canterbury, southern England, on March 21, 2013. (Reuters/Luke MacGregor)

Canterbury, England — British religious leaders are praising Archbishop of Canterbury Justin Welby for responding with "steadiness and honesty" to the stunning news that his biological father was not his mother's husband.

The revelation was expected to bring the elite-educated primate closer to the people.

In a statement released April 8, Welby said he had discovered that he is actually the son of Sir Anthony Montague Browne, Winston Churchill's last secretary. Browne worked alongside Justin Welby's mother in the prime minister's office at 10 Downing Street.

The leader of Roman Catholics in England and Wales, Cardinal Vincent Nichols, said he was "full of admiration" for the way Welby and his 86-year-old mother Lady Jane Williams, handled the news.

"Upheaval in family life is neither uncommon nor easy to embrace. Every family knows this," he said in a statement. "But to do this with such steadiness and honesty, and in the full glare of publicity, is remarkable and yet fully characteristic of them both."

Jonathan Romain, one of Britain's best-known rabbis, praised Welby for being "open and frank."

"It is a good example of how to deal with unexpected or difficult news," he said. "It also recognizes the reality that family life can often be wonderful and enriching but is equally capable of being messy and complex."

After considerable research by Charles Moore, a former editor of the Daily Telegraph and the official biographer of Margaret Thatcher, Welby submitted to a DNA test that showed a match with Montague Browne.

In his statement, Welby said it was "a complete surprise" for him to discover that his biological father was not Gavin Welby, an alcoholic whisky salesman who died when the future archbishop of Canterbury was a child.

"There is no existential crisis and no resentment against anyone," the 60-year old Welby said. "My identity is founded in who I am in Christ."

Welby, a father of five, is a former oil executive who quit the world of high finance in 1992 to become a priest.

He was bishop of Durham in northern England for only a year when he was tapped to succeed Rowan Williams as Britain's top Anglican churchman in 2013.

He had been seen as somewhat out of touch, partly as a result of his education at the elite Eton College, and his successful career in the energy sector. The satirical magazine "Private Eye" nicknamed him Justin Oilwelby.

Screenwriter Julian Fellowes, a Conservative member of the House of Lords and creator of the "Downton Abbey" show, predicted the revelation would give Welby street cred with the public.

"One's parentage is unchangeable and the only thing to do is accept it and move on and Archbishop Welby has taught us how to do that," he said. "It's good to see a spiritual leader tested spiritually and meet the challenge as eloquently as he has. He is an example to us all."