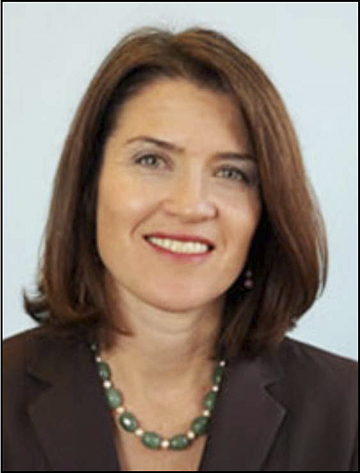 Sitting in her new office, Alexia Kelley can still hear the sounds of her previous position.

“It’s the presidential motorcade,” she told NCR, as sirens of escorting SUVs and police cars interrupted a recent interview.

“I’m just really excited about this privilege and opportunity to serve our members and build on a great legacy that the organization has achieved over so many years,” she told NCR Tuesday, two days before her official introduction Nov. 14 as the president of the Catholic grant-maker network.

Before coming to FADICA, Kelley worked three years as a senior official for President Barack Obama’s Office of Faith-based and Neighborhood Partnerships – two at the Health and Human Services department’s center as its director, and the last as senior policy advisor at the White House office.

Kelley started her work with FADICA in early October, introducing herself to its board and members while learning about their individual interests and priorities motivating their contributions to Catholic causes.

“There’s wonderful diversity and richness of interests and priorities among the members, and I think both a real desire to continue to do, and build on all the things that FADICA has done in the past,” she said.

“They really share a common vision to support the church’s mission and to strengthen the church.”

FADICA is a network of Catholic philanthropists – largely family foundations with some individual donors – with a shared mission to support Catholic-sponsored programs and institutions. Primarily, the organization arranges several educational symposia each year for its members to come together and hear speakers discuss topics the members have prioritized.

“[Kelley’s] strong commitment to her faith, a history of enabling younger people to develop their leadership, and a keen understanding of the broad scope of the nation’s religious and charitable organizations, will serve our network of grant makers well,” said William Raskob, chairman of FADICA’s board of directors.

Kelley’s appointment ends a presidential search that began shortly after Francis J. Butler announced in February his retirement from the organization. Butler had become the face of FADICA, serving as president for 32 of its 37 years.

To replace Butler, the board and its members sought “a servant-leader,” said Charity Sr. Sally Duffy, board member and search committee chair, “who would help us to focus on the issues that would strengthen the mission of the church as well as be a community builder.”

Kelley’s ability to articulate a vision impressed several board members, who also found her capable of easily communicating with the multiple generations – from people in their 20s to those in their 80s – FADICA’s donor members represent.

They also noted the wide-ranging network Kelley brought with her, a reflection of the varying positions she has held in the non-profit and government sectors.

From 1993-2002, Kelley worked with the USCCB’s Catholic Campaign for Human Development, before moving on to the Environmental Resources Trust, where she advocated for renewable energy and climate change mitigation.

In 2004, she worked briefly as a religious advisor for Massachusetts Senator John Kerry’s presidential campaign, and a year later, she co-founded Catholics in Alliance for the Common Good, a social justice advocacy group.

Kelley attributes her Catholic faith for motivating her “to serve the most vulnerable and to try to make an impact.” A graduate in theological studies of the Harvard Divinity School, she studied religion’s role in American history, finding herself fascinated with abolitionist Quakers before discovering her own faith’s call for justice in Catholic social teaching.

“I think my faith has always called me to try to put our values of common good and human dignity into action and to work for those values,” she said.

In 2009, Obama named her the Faith-based Initiative’s center director at Health and Human Services department, an appointment both praised and criticized.

Opining in June that year at Salon.com, former Catholics for a Free Choice president Frances Kissling questioned “why the post, which includes oversight of the department’s faith-based grant-making in family planning, HIV and AIDS and in small-scale research into the effect of religion and spirituality on early sexual behavior, has gone to someone who both believes abortion should be illegal and opposes contraception.”

Others, like Stephen Schneck, director of the Institute for Policy Research and Catholic Studies at the Catholic University of America, saw Kelley making “a huge impact in the Catholic outreach efforts” of the Faith-based office, telling NCR in June 2011 that her office had “become a focal point for Catholic engagement with the administration.”

That engagement sought to build and strengthen ties between faith-based community organizations and the government, through initiatives such as vaccine access, childhood obesity, disaster response and adoption. She also worked to highlight Catholic education, and called one of her proudest accomplishments providing outreach and engagement for the Affordable Care Act's Pregnancy Assistance Fund. The fund  received $27 million to support pregnant and parenting teens and women, including domestic violence victims, in 17 states.

Her time at the White House also corresponded with the contentious HHS mandate requiring health insurance policies include contraception coverage.

Kelley, though connected to the two government offices at the center of the debate, said the mandate fell outside her office’s primary responsibilities, saying she was hopeful an agreement that satisfies all parties can be reached. With her responsibilities now at FADICA, she added, “I’m always willing to serve the wider church and the common good as a bridge builder, as that’s appropriate to my new role.”

That new role has Kelley acting as a liaison, connecting FADICA member donors who share similar agenda, while bringing the larger member base together in a consortium for learning opportunities at its symposia.

Making connections is an important part of the position, said Raskob, adding “you really do have an ability to make a difference in the church if you can bring together the right people.”

Duffy believes Kelley’s skill set and leadership, combined with her broad-reaching network, will bolster FADICA’s mission to address the church’s needs through philanthropy.

“She will bring many different lenses [of Catholic social teaching] in terms of that network that can better inform us as grant makers as we try to provide grant making that will partner in the mission of the church,” she said.

“I’m very enthusiastic just that she’ll continue Frank’s good work for a new generation, and will continue to animate the work of the church for these funders,” Raskob said.