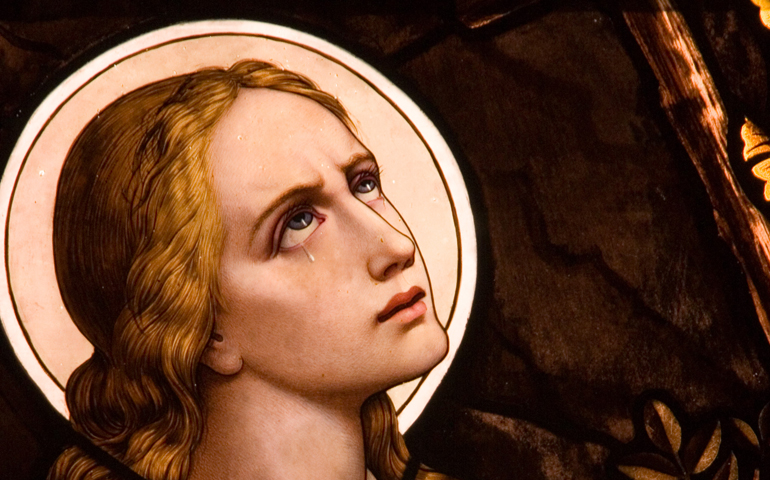 St. Mary Magdalene is depicted in a stained glass window in the Cathedral of the Holy Cross in Boston. (CNS/ Gregory L. Tracy, The Pilot)

She's been apostle to the apostles.

She's been a sinner and a saint, played a starring role in Dan Brown's "The Da Vinci Code" and ended up a feminist icon.

In an email Wednesday (July 20) from London, Haag told RNS:

My book is a quest; it does not pretend to offer certain answers; instead, it asks questions about everything we are told about MM. How much is true? What are the motives for inventing things? Why turn MM into a whore when the gospels very clearly say nothing of that at all? How do these pieces fit together? What stories do they tell us? What new questions do they raise?

Haag did have a few answers to questions about Mary Magdalene as the saint's feast day in the Roman Catholic church -- the first since Pope Francis elevated the observance from a memorial -- approached on July 22.

Emily McFarlan Miller: You point to the Vatican's 1969 decision to change the reading for the memorial of Mary Magdalene, which used to be about a "sinner" anointing Jesus' feet, as an admission it had gotten her wrong. How do you interpret the Vatican's move now to elevate the memorial to a feast day?

Michael Haag: The Orthodox church never said Mary Magdalene was a prostitute or a sinner. That was an invention of the church in the West, which, as I have explained in my book, had its reasons for elevating Mary the mother of Jesus and trashing Mary Magdalene -- principally, to counter gnosticism and other heretical notions in Egypt and elsewhere.

So in turning its back on the original depreciation of Mary Magdalene by Pope Gregory the Great (590-604), the Roman Catholic church was adopting the practice of the Eastern Orthodox Church, or reverting to how things had originally been.

You also write that you wanted to explore "how she has been reinterpreted for every age" and "what she herself reveals about woman and man and the divine." What did you discover?

As a witness to the Resurrection, Mary Magdalene was a challenge to the early church and has remained so ever since.

The problem, or danger, from the church's point of view is that MM had encountered the divine when she discovered the tomb was empty; in other words, she had a direct and personal encounter. In doing so, she bypassed the workings, the function, the purpose of the church. … Her story potentially sets up an opposition between the church, which claims as its function to mediate the divine, and the direct and personal and private apprehension of the divine that anyone might have as Mary Magdalene herself had.

It is interesting to see how that struggle has seesawed through the ages and what forms it has taken, and how it has challenged the primacy and even the legitimacy not only of the organized church, but its male hierarchy. And how it has been a woman, or the figurehead of a woman, who has served that challenge -- suggesting the possibility that there might be something special, necessary even, about the role of woman when contemplating the divine.

Since the publication of your book, the Harvard University scholar who introduced the "Gospel of Jesus' Wife" has admitted it likely is a fake. Some have theorized Mary Magdalene was Jesus' wife, an idea made popular by The Da Vinci Code. Why is this such a popular theory?

Professor Karen King's unsubstantiated nonsense, which had the backing of Harvard University, shows how far one can run with the latest fashion; in this case, feminism and its application to everything in Christian studies.

Feminism aside, the very fact that MM was an independent woman and worked closely with Jesus raises questions about their relationship. It would have been extremely difficult for an unattached Jewish woman of first-century Palestine to have traveled with Jesus and to have had the wherewithal to support him financially. And it would be scandalous for a woman who was not closely related to Jesus, or not his wife, to have gone to his tomb to clean and anoint his naked body. In other words, there are grounds for this theory and people have been proposing something like it since the earliest centuries.

Also, in our secular age it seems easier to explain a close relationship in carnal terms than spiritual terms.

What surprised you most along the way of researching Mary Magdalene and writing this book?

I suppose what surprised me most was how important the story has been in the course of 2,000 years, its inventions and reinventions, and how much it still matters to us today. That suggests to me Mary Magdalene has a significance, a power, greater than the Gospels tell, greater than the church. It is the old story of death and love and rebirth.

Take that carnally, take it spiritually, take them together as one, but it is the oldest story around.