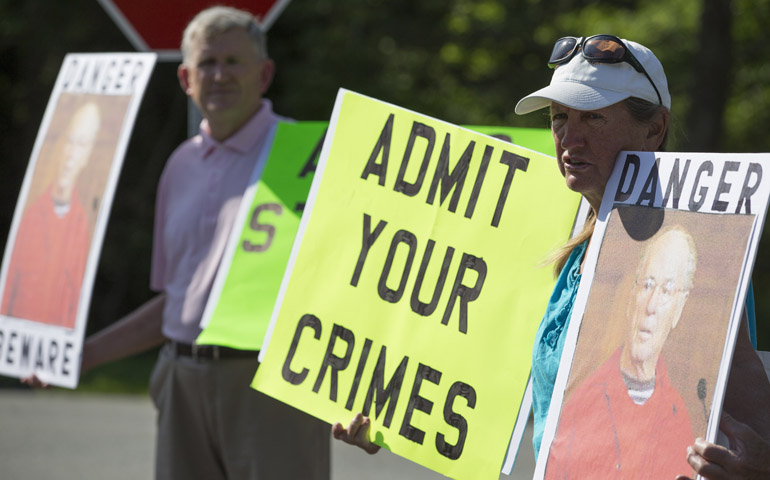 Protesters speak to television reporters while holding signs "Admit your crimes" in protest of the release of former priest Paul Shanley from prison July 28 in Bridgewater, Massachusetts. (CNS/CJ Gunther, EPA)

Ex-priest Paul Shanley was released from prison on July 28 after serving 12 years for child sex abuse, but some worry he still poses a danger to children.

Two organizations, Real Women Real Stories and Survivors Network of those Abused by Priests, also known as SNAP, are co-sponsoring an online petition, "Victims' Plea: Place Rapist Ex-Priest in a Secured Treatment Center," that urges "the Boston Archdiocese and the State of Boston to insist Shanley live in a facility where he can receive treatment and where he will have no access to children, and to wear a GPS bracelet so that his whereabouts can be tracked on anytime." Organizers clarified to NCR that the state of Massachusetts is the intended government recipient of the petition.

To emphasize the danger of letting Shanley move freely, the petition cites the example of a 72-year-old Irish ex-priest who was convicted of abusing at least 25 children in California, but was later reported to be living yards from a playground in the Netherlands and volunteering at a Catholic parish under an assumed identity.

Although Shanley is 86, the petition warns his advanced age could actually make him more dangerous by allowing him to seem "harmless."

"Everything we hear about predators says they'll tend to repeat the crime," said Barbara Dorris, outreach director for SNAP. "Many people came forward saying Shanley hurt them, yet he's being turned loose in society."

"That's the law," Dorris said, "but church officials have an obligation to do more. They recruited him, they ordained him, and they covered for him when they knew or should have known that he posed a danger to children. Now they can take some simple steps to protect the community."

"Nothing is foolproof, but we should do everything humanly possible to put the safety of the kids first."

- Barbara Dorris, Survivors Network of those Abused by Priests

Dorris is not sure how much control church officials have over Shanley, but said it is possible the church is still financially supporting him in some way. This would give officials leverage, and Dorris said the church should not "wash its hands" of someone so dangerous just because he was defrocked in 2004.

According to Dorris, the Catholic Church has many high-quality treatment centers where Shanley could live a comfortable life, receive treatment, and, most importantly, be kept away from children.

"Nothing is foolproof," she said, "but we should do everything humanly possible to put the safety of the kids first."

Matan Uziel, director of Real Women Real Stories, agrees that it would be better for everyone if Shanley could be rehabilitated in a secure center.

Uziel believes that the church could influence Shanley's movements, and emphasizes that the stakes are high. He said Shanley is a "dangerous man" and that if he is allowed to rape or molest anyone else, "it is most likely that those people's lives will be ruined."

Uziel's organization serves as a platform for women to speak about the "unseen hardships" they face in various places and professions, and he wants to use it to bring increased media and public attention to the petition. With enough signatures he hopes "we will be able to achieve some result and make sure [Shanley] is not going to just roam the streets."

The petition is not only directed to the Archdiocese of Boston and its cardinal, Sean O'Malley, but also to the state of Massachusetts and the Vatican. Dorris said this broad audience is important because "society as a whole needs to consider how to deal with sexual predators. Is releasing them back into society in the best interest of children?"

While it is normal for SNAP to monitor convicted sex offenders, Dorris said that "a petition is unusual, but Shanley touched a nerve." The recent publicity surrounding his release "brought back memories and triggers, because he was in the news constantly" when people became aware of the sex abuse crisis in 2002.

Shanley, who was convicted in 2005 of two counts of raping a child and two counts of indecent assault and battery on a child, was the second former priest from the Boston diocese to be criminally convicted of sex crimes against a child.

His accuser testified that repressed memories of being raped and molested by Shanley on multiple occasions returned when the clergy sex abuse scandal became public knowledge in 2002.

"Paul Shanley's crimes against children were reprehensible. No young person should ever have to experience such violations of their safety and dignity," the Boston Archdiocese said in a recent statement.

Related: No one is monitoring former abusive priests