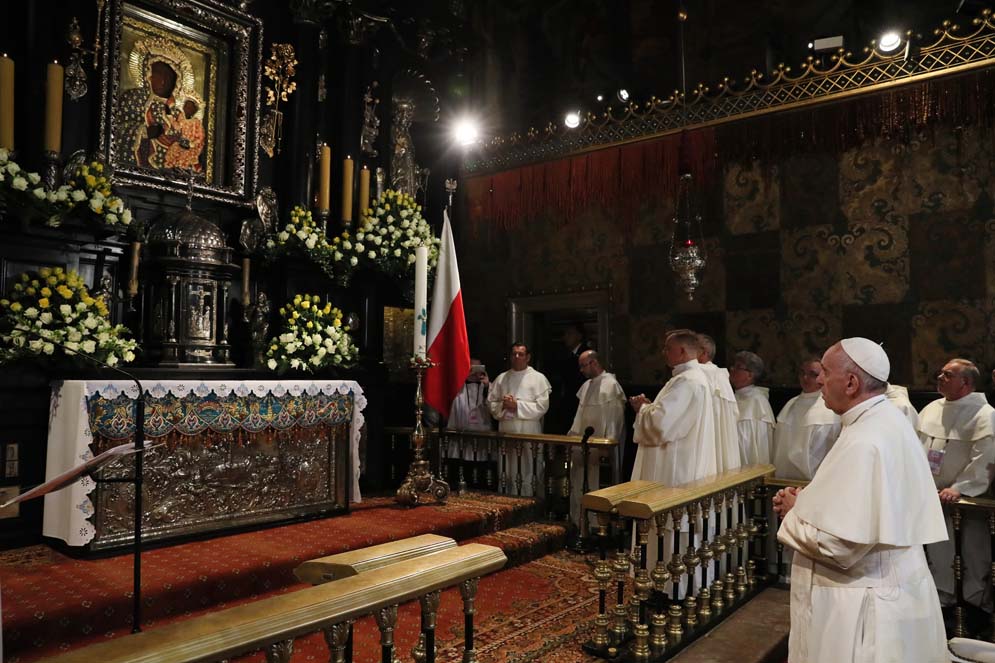 Pope Francis prays in the chapel of the Black Madonna at the Jasna Gora Monastery in Czestochowa, Poland, July 28, 2016. (CNS/Grzegorz Galazka, pool)

At the center of this city of 227,000 people, the Avenue of the Most Blessed Virgin Mary cuts a wide swath past shops, restaurants, bars and offices. Uphill in the distance, beyond the trees, the baroque spire of the Jasna Gora monastery points triumphantly towards heaven above a rambling maze of high walls and battlements.

Most Poles have personal memories of visits to their country's national sanctuary, whether in hushed school and parish groups, or among vast crowds welcoming the Polish pope, St. John Paul II. Throughout Poland's turbulent history, it's expressed more than anything else the influence of the Catholic Church.

Yet today, that influence is being challenged — and when, in late January, a top Dominican priest penned a scathing attack on Poland's church and government, it brought pent-up frustrations into the open.

The occasion for Fr. Ludwik Wisniewski's onslaught, in Poland's weekly magazine Tygodnik Powszechny, was the release of new data confirming a sharp drop in Sunday Mass attendance. But it gained a political edge by coinciding with criticisms of the church's ties with Poland's center-right government, which faces European Union sanctions over a controversial reform program.

Some Poles think Wisniewski's article presented a one-sided view of the church, which has already been thrown on the defensive by skewed media reporting.

"Much as I respect him, I don't support his claims," said professor Jan Zaryn, a senior contemporary historian. "The statistics certainly show laicization is underway here, as it's been for decades in Western Europe. But there's no firm evidence this is linked with our church's conservativism or any government actions."

The critique by 81-year-old Wisniewski, dramatically titled "Oskarzam" ("I accuse"), was significant for appearing in a Catholic newspaper, and for coming from a veteran of the church's communist-era struggle for human rights. The latest attendance figures, Wisniewski lamented, were the worst in modern times, and showed how Poles were now deserting the church because of distortions of the Catholic faith.

He singled out right-wing parliamentarians who claimed to be devout Catholics while inciting fear of refugees and migrants, as well as Poland's controversial Redemptorist-run Radio Maryja, which had "for years pumped out hatred and division."

He also attacked Jaroslaw Kaczynski, who heads the governing Law and Justice Party, for "promoting enmity and resentment in religious packaging," and unnamed priests who spent their time "tolerating and praising nationalism."

The time had come, the Dominican declared, for Poland's Catholic bishops to "enter the public arena" and speak out — as "the only force retaining any authority."

"Before our eyes, Christianity is dying in Poland — while our bishops are sadly silent," Wisniewski went on. "You can now spit on people, deride and trample on them, groundlessly accusing them of wickedness, even crimes — while invoking the Gospel, decking yourself out as a defender of Christian values and making pilgrimages to Jasna Gora."

Figures from the church's Statistics Office of the Catholic Church, run by the Pallotine order in Warsaw, show attendance has dropped by 3.1 percent in just a year, with 36.7 percent of Poles now coming regularly, compared to more than half two decades ago. Admissions to Poland's 83 Catholic seminaries are still falling as well, along with vocations to its 104 female religious congregations, raising fears of a future clergy shortage.

What made Wisniewski's article controversial was his attempt to pin the blame on "passivity" by Poland's bishops, who've been accused of being too close to Kaczynski's Law and Justice Party-led government.

Since winning an election landslide in October 2015, the Law and Justice Party has been under heaviest fire for reforms to Poland's judicial system and state media.

Government supporters insist the replacement of judges and media directors was needed to ensure greater accountability. However, the reform package has sparked protests from the liberal opposition Civic Platform Party and sanction threats from the European Union, where Law and Justice Party's former arch-opponent, Donald Tusk, is president of the intergovernmental European Council.

In a November resolution, the EU's Parliament voted to invoke Article 7 of the 2007 Treaty on European Union and demand Poland's suspension from decision-making unless it cancelled the reforms.

The 750-seat European Parliament has criticized Poland in three other resolutions since Law and Justice Party entered government, and the party's backers insist the dispute has been blown out of all proportion.

But the Law and Justice Party also accused European politicians of pushing their own agendas, and ostracizing Poland for defying permissive EU values.

Zdzislaw Krasnodebski, a Law and Justice Party member of the European Parliament, says previous Polish governments have made parallel reforms without provoking international controversy. To present this government's efforts as an attack on democracy and legality represents a "cartoon version of events," he insists.

It also ignores the Law and Justice Party government's tough pro-Western stance on defense and security, and the economic and social advances currently underway in Poland, which were on display when Polish President Andrzej Duda and Prime Minister Mateusz Morawiecki appeared at the World Economic Forum in late January at Davos. 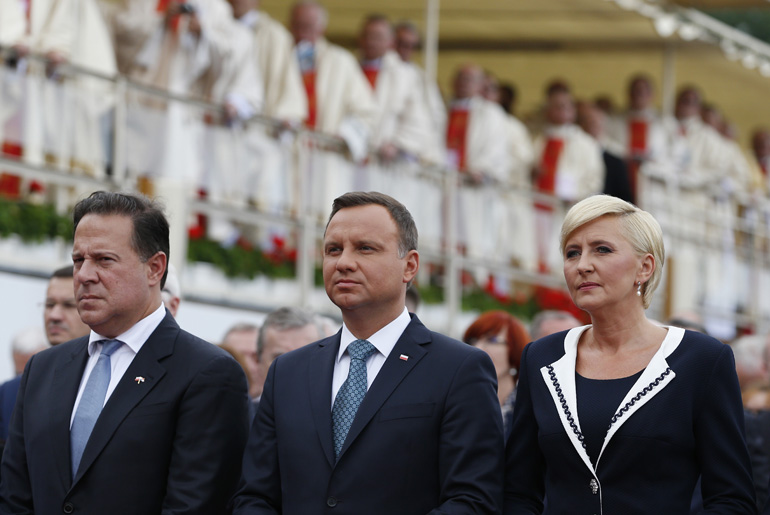 President Andrzej Duda of Poland, second from left, and his wife, Agata Kornhauser-Duda, attend Pope Francis' celebration of a Mass to mark the 1,050th anniversary of the baptism of Poland near the Jasna Gora Monastery in Czestochowa, Poland, July 28, 2016. (CNS/Paul Haring)

"A good opposition should criticize government — but it should also challenge fake news about its own country," Krasnodebski told NCR. "Instead, this absurd, alarmist picture has been allowed to emerge, that fundamental rights are being violated. In reality, there's no difference between Poland, Germany and other Western countries."

Krasnodebski blames the Civic Platform Party for refusing to accept its 2015 election defeat, and predicts the EU's sanctions threat will founder as Hungary, Bulgaria, Austria and other countries oppose intervention — against a government which, despite the pressures, still enjoys a big lead in opinion polls.

As for the church, Krasnodebski dismisses claims about its close ties with Law and Justice Party as another "media confabulation." In reality, Poland's bishops have kept a careful distance from Kaczynski's party, knowing Polish opinion won't tolerate a politicized church and, on several occasions, they've harshly criticized it.

Last September, when Law and Justice Party leaders backed calls for new war reparations from Germany, church leaders warned against "thoughtless decisions and rashly spoken words." And when the Israeli government and Jewish organizations condemned a new Law and Justice Party-backed law in late January, criminalizing claims about Polish complicity in the Holocaust, most bishops maintained a studied silence.

Zaryn agrees church-government links have been exaggerated. Given the party's supportive attitude to the church, most bishops will naturally prefer this party to others, he concedes.

In its November resolution, the European Parliament also threatened action if Polish members voted for a bill to curb abortions on handicapped fetuses — an initiative backed by 830,000 people in a petition to the Sejm lower house.

That the Law and Justice Party has vowed to resist such outside pressure will clearly win the bishops' favor, Zaryn concedes. But they'd favor other parties equally if they similarly defended Poland's Christian heritage.

"The church doesn't have a duty of loyalty to any political force — and there are certainly contrasting political sympathies and antipathies within the bishops' conference," Zaryn said. "But while the impression remains that EU officials are trying to steer developments in Poland and muzzle Catholic views, it's obvious there'll be areas of agreement."

Malgorzata Glabisz-Pniewska, a senior Catholic presenter with Polish Radio, concurs that current discussions ignore the pluralism now evident in the church — of which Wisniewski's Tygodnik Powszechny tirade was one example. While all Polish bishops are united around key issues such as abortion, euthanasia and faith in the public sphere, she says, they differ in other areas.

Even in the two Catholic dioceses making up the Polish capital, the recently retired Archbishop Henryk Hoser of Warsaw-Praga has backed the Law and Justice Party's reform package, while Cardinal Kazimierz Nycz of central Warsaw has opposed parts of it.

In this changing environment, phrases like "the church says" or "the church thinks" no longer carry much meaning.

Wisniewski's criticism of church leaders' "passivity" was rejected as "groundless and hurtful" by Fr. Pawel Rytel-Adrianik, spokesman for the Polish bishops' conference.

The bishops had urged "all possible help" for migrants and refugees during special Masses in mid-January, the priest recalled, while just two days later, for the church's annual Day of Judaism, the bishops' conference president, Archbishop Stanislaw Gadecki, issued a document carefully distinguishing patriotism from nationalism. 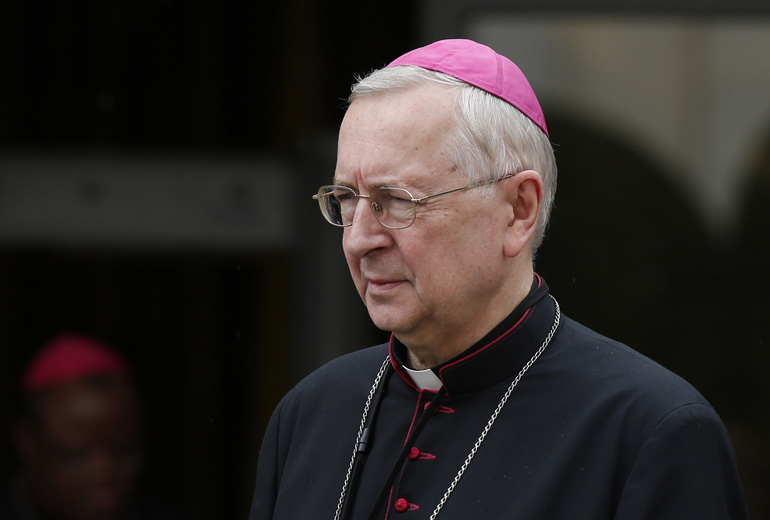 Archbishop Stanislaw Gadecki of Poznan, president of the Polish bishops' conference, leaves a session of the Synod of Bishops on the family at the Vatican Oct. 14, 2015. (CNS/Paul Haring)

In December, the conference launched a glossy Twitter feed to counter criticisms of the church, while its Catholic Information Agency (KAI) ran an inventory of previous appeals for unity and harmony by Gadecki and others.

Although the latest church data confirmed falling Mass attendance, they also showed higher numbers receiving sacraments, including a 10 percent increase in first Communions. Participation rates vary widely around Poland's 44 Catholic dioceses, with 67 percent attending church in southeastern Tarnow, compared to less than a quarter in more secularized western dioceses. But 61 percent of Poland's 10,000 parishes now have their own internet sites, or soon will have, suggesting the church is keeping up with technical innovations.

As in the rest of Europe, fewer people appear to be participating now out of tradition or social obligation, and more for genuinely religious reasons. But at 36.7 percent, Polish Mass attendance is still the envy of the church in other countries.

Fr. Wojciech Sadlon, the director of the Statistics Office of the Catholic Church, agrees Polish Catholicism is witnessing a transition from quantity to quality, as falling numbers combine with deeper commitment.

"These figures shouldn't fuel a sense of guilt that things were better before — the church remains itself, whatever its size and strength," Sadlon told the KAI agency. "Of course, it doesn't always fulfill its apostolic mission perfectly, and often lacks evangelical witness both from priests, religious and lay faithful. But its responsibility lies in being able to spot its weaknesses and make improvements."

Those "improvements" will certainly include seeing problems and challenges in a calmer, more rational and less emotional way, and moving away from rhetorical simplifications and stereotypes. While these are still resorted to by some Polish bishops, they abound in other quarters too — and made a strident appearance, some argue, in Wisniewski's recent critique.

"Though certain processes are driving laicization here, Polish Catholics are still propping up church life in many parts of the world," Zaryn told NCR. "We have to get used to knowing there's room for various tendencies and preferences in the church, and that priests and bishops, like all citizens, have different views and ways of expressing them."

None of this will be of prime concern to the huge numbers still converging daily on Czestochowa's Jasna Gora sanctuary, where Poland's fabled Black Madonna icon hangs amid glittering lights in the Lady Chapel, amid a mass of rosaries and crucifixes left by pilgrims over centuries.

Over four million people visited the hilltop monastery in 2017 according to the Pauline order which runs Jasna Gora, including thousands of U.S. Catholics, and 123,000 made the journey on foot, while 2.8 million Holy Communions were dispensed at 68,000 Masses before Jasna Gora's various altars.

In some places at least, Poland's Catholic devotions seem as strong as ever.