As 2016 presidential race looms, which party is more divided? 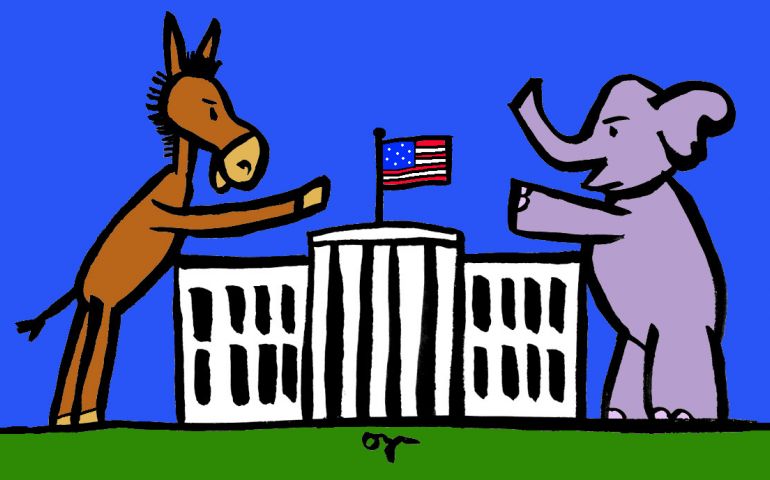 On Dec. 4, conservative columnist Charles Krauthammer penned an op-ed in The Washington Post suggesting that the common narrative about deep divisions within the Republican Party is wrong, and that it is the Democrats who face the really ideological divisions as both parties prepare for the presidential nominating process.

Krauthammer acknowledged that some Republicans want to shut down the government as a means of defunding Obamacare or de-fanging President Barack Obama's executive order on immigration. Others don't.

"It's a tempest in a teapot, and tactical at that," he wrote of the GOP divide. "Meanwhile, on the other side, cannons are firing in every direction as the Democratic Party, dazed and disoriented, begins digging itself out of the shambles of six years of Barack Obama."

Krauthammer thinks the Democrats have been driven by ideological considerations shared by elite groups and powerful interests, but ones that either don't matter to middle class voters or actually alienate them. Pointing to a recent speech by Sen. Charles Schumer (D-N.Y.) that questioned the political advisability of the Democrats enacting Obamacare, Krauthammer concluded, "The underlying Schumer challenge is that catering to coastal elites and select minorities is how you end up losing 64 percent of the white working class  -- which, though shrinking, is almost 50 percent larger in size than the black and Hispanic electorates combined."

Is Krauthammer right? "I think he more than overstates the case," said Alan Wolfe, director of the Boisi Center for Religion and American Public Life at Boston College. "Democratic division is one of those stories that never goes away. In actuality, it is the Republicans, in control of both houses of Congress, who will find themselves more paralyzed by their own divisions than by anything the hapless Democrats do."

Wolfe thinks Krauthammer is exactly wrong in assessing which party is divided by ideas and which by mere tactics.

"It is ideology rather than tactics that divide the Republicans," he said. "Just watch the interventionists gang up on [Sen.] Rand Paul [R-Ky.], even as he does everything in his power to please them," referring to the establishment interventionism versus Paul's isolationism.

It is difficult to think that foreign policy will drive the nominating process -- except that it is the nature of foreign policy to provide unpredictable changes in a campaign narrative. Candidates can't stay "on message" regarding domestic issues when the headlines are dominated by crises abroad.

Professor Stephen Schneck, director of the Institute for Policy Research and Catholic Studies at The Catholic University of America, is more sympathetic to Krauthammer's analysis, or at least as it applies to the Democrats. Schneck points to the 2014 elections to show how Democrats can manage to ruin their own chances.

"In the spring of 2014, those who control the party's money spigots -- and thereby those who direct campaigning nationwide -- made the decision to forego the issues of income inequality and the middle-class squeeze," Schneck told NCR. "They decided 2014 was to be a 'base election' and so would not devote energies to go for swing voters or pitch to the general electorate.

"Even if that determination was right, and I don't think it was, the real stupidity was then deciding that the party's 'base' was defined by identity politics. So, instead of campaigns reaching out broadly to alienated middle and working classes, we got surreal campaigns about reproductive choice, wind farms, and Internet neutrality that spectacularly failed to move voters, but stroked the worldviews of inside-the-beltway operatives and their sectarian interest groups."

2014 was a midterm election, always a low turnout event, but the nominating process is dominated by party primaries with even fewer voters. Playing for the votes of discrete slices of the base will be very tempting.

Schneck is more skeptical of Krauthammer's views about the divisions within the Republicans.

"The GOP has a more existential crisis; it's looking for its soul," Schneck said. "What do Republicans share at the moment other than opposition to Obama? Republicans must somehow bridge a metaphysical chasm between the religious right's insistence on social absolutes and the exploding numbers of libertarians for whom radically free choice is everything."

Two potential candidates embody this division. Former Sen. Rick Santorum, the runner-up in 2012, is expected to run again as the champion of the religious right, and Paul is expected to campaign as a more savvy, less extreme champion of his father's libertarian cause.

There is a third leg to the Republican base, too. "The GOP must accommodate the party's traditional corporate and business allies while welcoming a burgeoning heartland populism that's just as angry at country club and boardroom elites as it is at big government," Schneck said.

As well, the pro-business Republicans tend to part ways from both the religious right and the libertarian wing of the GOP on issues such as immigration reform and tax reform.

"Tensions have already boiled up among Republicans on the Hill in the current lame-duck session," Schneck added. "The real test comes with the looming presidential races. It's an open question if the GOP will see part of its divided base pulled away by a rogue candidate playing the third-party card."

The seemingly irreconcilable divisions within each party ultimately will not be resolved by uniting around a shared agenda. Candidates, not policies, are on the ballot.

On the Democratic side, former Secretary of State Hillary Clinton is the presumptive, but not the prohibitive, front-runner. Her close ties to Wall Street have already caused organized labor to shop around for other viable candidates. A recent headline in Politico read "Big labor eyes Hillary warily" and quoted AFL-CIO President Richard Trumka saying, "The big question we want to know is, 'What's the agenda?' We don't want to hear that people have a message about correcting the economy -- we want to know that they have an agenda for correcting the economy. If we get the same economic [plan] no matter who the president is, you get the same results."

There is no single Republican candidate who can satisfy all the different ideological flavors within the party's base, but former Florida Gov. Jeb Bush might be acceptable to all sides, as might a successful incumbent governor like Ohio's John Kasich or Wisconsin's Scott Walker.

The irony is that if our nation's political parties were ideologically coherent, there would be a libertarian party and a communitarian party, instead of today's Democrats and Republicans, with each party containing elements of both core ideological tendencies. How that intellectual incoherence plays out, in 2016 and beyond, is anybody's guess.

Column | As 2016 presidential race looms, which party is more divided?

Vietnamese refugee priest to Trump: Give my citizenship to a Syrian