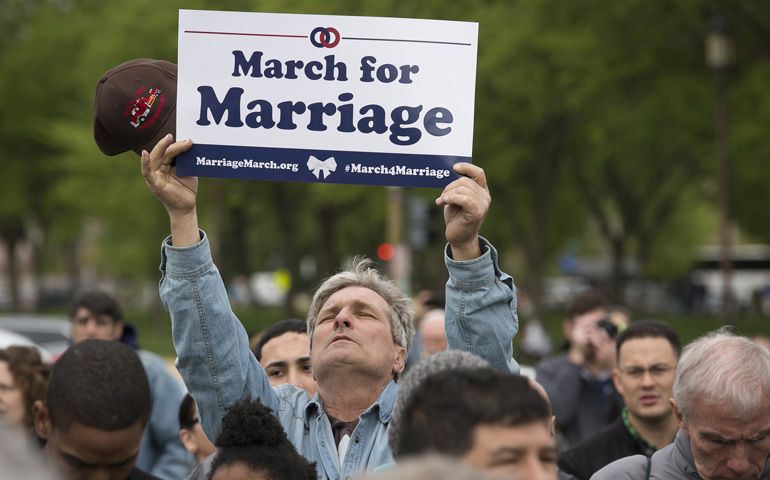 A man holds a sign supporting traditional marriage Saturday near Capitol Hill in Washington during the third annual March for Marriage. (CNS/Tyler Orsburn)

Washington — The president of the U.S. Conference of Catholic Bishops called same-sex marriage "the greatest social experiment of our time" and said that "children do not need experiments," but rather the love of a mother and father at the third annual March for Marriage rally Saturday supporting traditional marriage on Capitol Hill.

Addressing a crowd estimated at 5,000 by the National Organization for Marriage, march sponsors, Archbishop Joseph Kurtz of Louisville, Ky., described traditional marriage between one man and one woman as a "beautiful truth," saying its protection is necessary to "protect the children."

When asked afterward to elaborate on his statement, Kurtz told Catholic News Service that "basically, every child comes into the world through a mother and a father. That child not only deserves to know, but to be loved by the mother and father. Children flourish when they are able to be loved and raised by their mothers and fathers."

San Francisco Archbishop Salvatore Cordileone was also scheduled to attend the march, but announced last week he would not attend so he could "remain home and attend to the pastoral needs of the Church here at this time."

A pre-march rally began with a prayer from Archbishop William Lori of Baltimore, chairman of the bishops' Ad Hoc Committee for Religious Liberty, in which he thanked God for "the diversity" of the group present and asked for the protection of religious freedom in the United States.

When asked about the religious liberty language in his prayer, Lori told CNS that "the word marriage appears hundreds of thousands of time in federal, state and local laws."

"If that's completely redefined across the board, it represents a sea change. And not only our preaching and our worship, but also our social services, our education, all the things we do for the common good rest on the understanding that marriage is between one man and one woman and that it's a lot to do with bringing children in the world and their well-being," he said.

"So [a marriage redefinition] will raise a lot of religious liberty questions. It raises the question of whether or not churches and individuals who sincerely believe this might not be penalized or denied contracts or the ability to serve the common good," the archbishop said.

The march came three days before the U.S. Supreme Court was scheduled to hear arguments Tuesday in four cases weighing whether states that bar same-sex marriage must recognize such unions that are legal in other states.

Participants remained enthusiastic throughout the march despite the gloomy, cool weather as they heard from a variety of speakers. Many carried signs and voiced chants in support of traditional marriage.

Brian Brown, National Organization for Marriage president, said planners wanted to bring a diverse group of people together for the event to highlight to the Supreme Court "that people have embraced the redefinition of marriage is simply untrue."

"Marriage is based upon the fundamental, biological reality of husband and wife, mother and father, and that the court has no authority to redefine that truth," Brown said.

Stressing the march's theme of religious liberty, Jennifer Marshall, vice president for the Institute for Family, Community and Opportunity at the Heritage Foundation, said standing for traditional marriage often comes with a cost. She cited recent incidents in which individuals have lost jobs and business because of their public expression of traditional marriage.

Marshall called such actions unjust, saying that "marriage existed before this government or any government," and that marriage is "two halves of humanity coming together for the future of humanity."

Speakers from groups such as the Family Research Council, Central Biblico Internacional, the Coalition of African-American Pastors, and the American Orthodox Institute also addressed the march.

The demonstration was not without opposition. As the column of marchers approached the Supreme Court, they were met by a wall of protesters waving rainbow flags.

One of the protesters told CNS he questioned "what God [the marchers] are serving." Another said, "This is the United States of America. You should be able to marry whomever you want."

In anticipation of the Supreme Court arguments, a large coalition of faith leaders, several of whom were at the march, penned an open letter Thursday to elected officials and people in public service.

"As religious leaders from various faith communities, we acknowledge that marriage is the foundation of the family where children are raised by a mother and a father together," the letter said.

Deserve's got nothin' to do with it