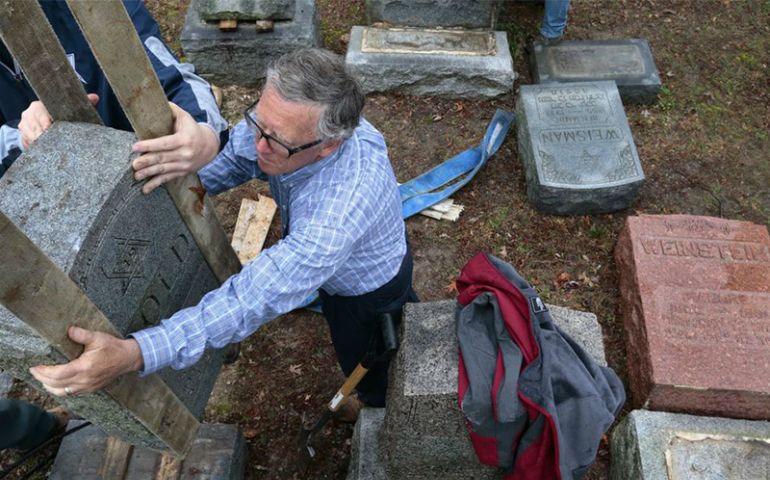 Washington — Capitol Hill lawmakers are pressing the Trump administration to help local communities battle anti-Semitism after a rash of threats to Jewish institutions and vandalism at historic cemeteries.

In a rare show of unity, all 100 senators sent a letter March 7 to Homeland Security Secretary John Kelly, Attorney General Jeff Sessions and FBI Director James Comey urging them to assist local law enforcement agencies in protecting Hebrew schools, Jewish community centers and synagogues as well as helping prosecute those who threaten or vandalize those institutions.

“It has become clear that threats of violence against individual JCCs are not isolated incidents,” the letter reads. “These cowardly acts aim to create an atmosphere of fear and disrupt the important programs and services offered by JCCs to everyone in the communities they serve, including in our states.”

Through the first week of March, more than 100 incidents of anti-Jewish activity have been reported in 33 states, according to the Jewish Federations of North America.

Several waves of bomb threats made against Jewish community centers in numerous states that have led to evacuations.

The desecration of dozens of headstones at historic Jewish cemeteries in Philadelphia and University City, Mo., near St. Louis.
Incidents of vandalism such as a swastika carved onto the door frame of a 100-year-old synagogue in Lorain, Ohio, a suburb of Cleveland, and slurs and swastikas drawn on cars and a building in suburban Buffalo.

Trump, who had been criticized by some human rights groups for not denouncing the anti-Semitic acts sooner, raised the issue during his address to a joint session of Congress last week.

“Recent threats targeting Jewish community centers and vandalism of Jewish cemeteries … remind us that while we may be a nation divided on policies, we are a country that stands united in condemning hate and evil in all of its very ugly forms,” he said.

The threats and attacks mirror a rise in the number of hate groups identified by the Southern Poverty Law Center.

“Today the Senate demonstrated a unified moral front against hatred and sent a strong message that in our America a threat against one of us is an attack on all of us,” he said.

Trump made excuses for neo-Nazis, but we cannot