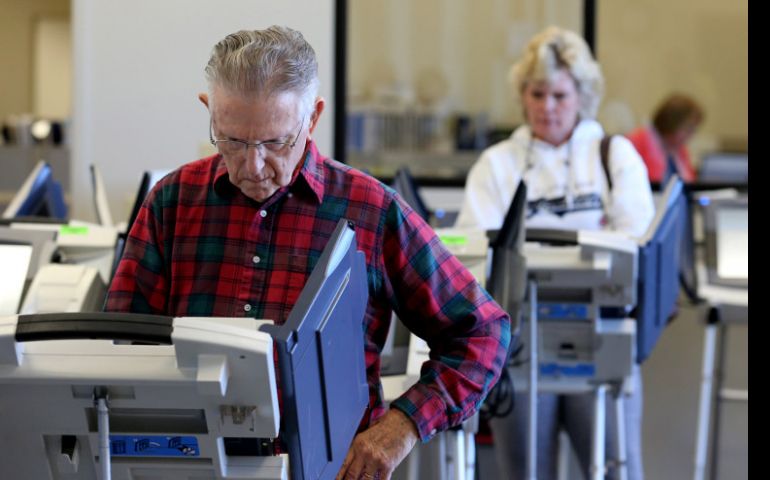 The 2016 election has revealed divisions in the American public, but it has taken a poll to show just how deep and dangerous those divisions are. The survey reveals a divided nation with many people disillusioned with the American political system and desirous of a leader who is not afraid to break the rules to get things done.

“We should be scared by this,” acknowledges E.J. Dionne of the Washington Post and Brookings Institution. “And that points to some real problems in our system.”

The divisions exist not only on partisan lines, but also on racial and class lines.

A majority (56 percent) of white Americans think that the American society and culture has gotten worse since the 1950s. They are very nostalgic about the past. Meanwhile, 62 percent of blacks and 57 percent of Hispanics think things have improved. For them, the 1950s is not an idealized period, but a time of discrimination and prejudice.

How you compare the past to the present is also influenced by class. Almost two-thirds of working-class Americans think the country is worse off, while 56 percent of college-educated Americans think things are better. Those with college educations are probably living better lives than their parents, whereas those without such an education may be see themselves slipping down the economic ladder from where their parents were.

Those with the dimmest view of American society and culture are Evangelical Protestants, 74 percent of whom think we were better off in the 1950s. For them, the 1950s was a time of stability, order, and good feeling when most of the country agreed with their values. 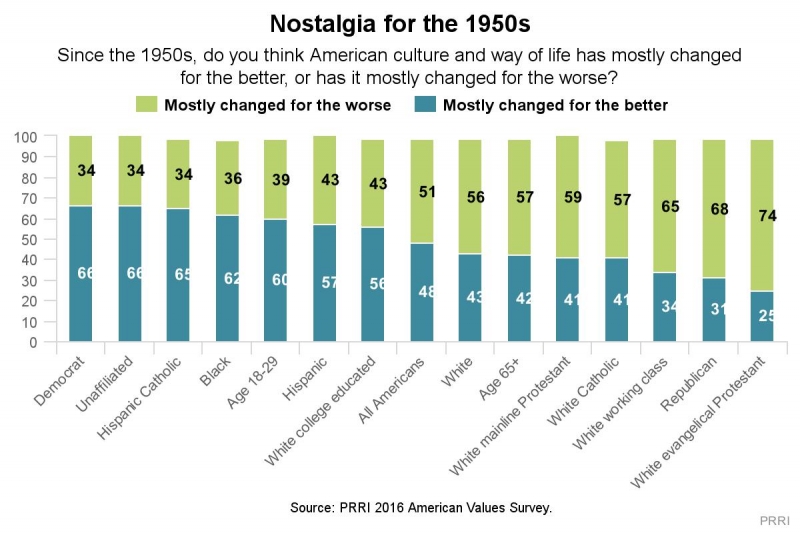 The government gets the blame for making matters worse. “Nearly six in ten (57%) Americans say the decline in American manufacturing jobs was caused by government policies and poorly negotiated trade deals,” according to the PRRI report, “while only 37% blame globalization and technological advances.” Most economists believe exactly the opposite. 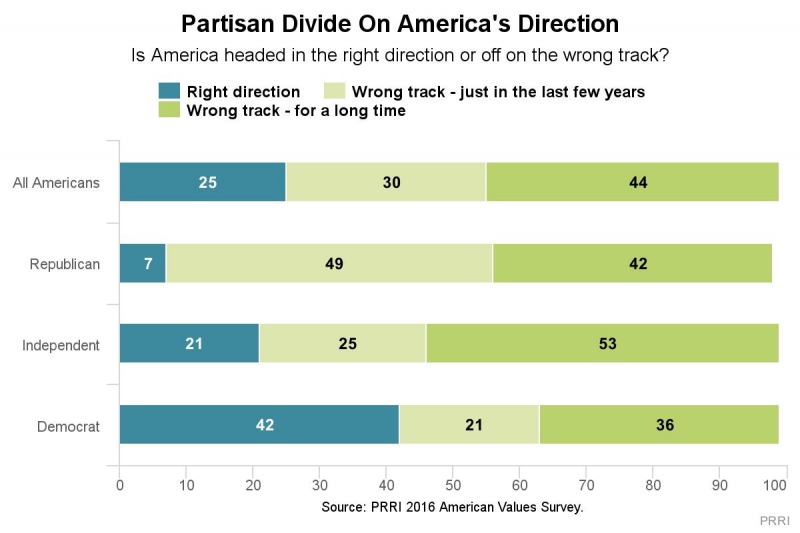 The public's view of political parties is also quite negative. Sixty-one percent of Americans say that neither political party represents their views anymore. This is up from 48 percent saying that in 1990.

Confidence in the American political process is also at risk. Only 43 percent of the public have a great deal of confidence that their vote will be counted accurately. 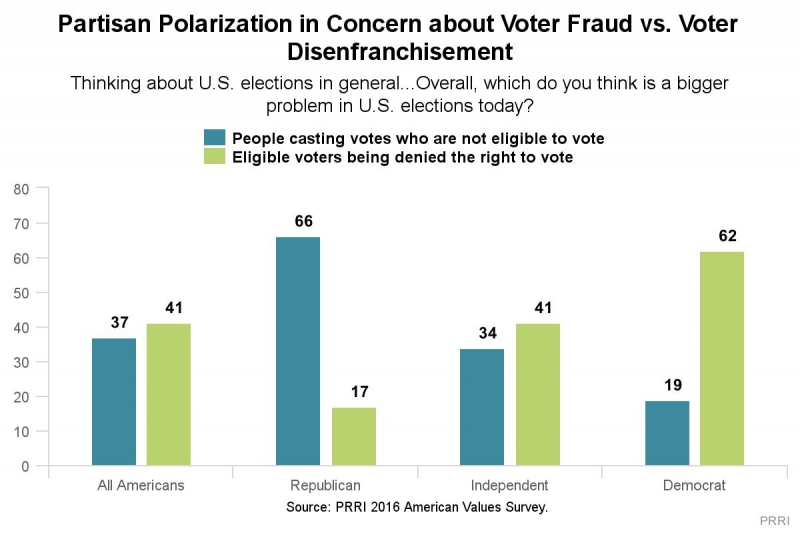 A majority (57 percent) of Americans also believe that politics and elections are controlled by people with money and by big corporations so it doesn’t matter if they vote. Only 42 percent of Americans disagree.

The survey also found that Americans tend to interact in highly segregated circles where people of different parties do not mix.

This partisan segregation leads to partisan views about the nation being reinforced rather than challenged. As a result, it is not surprising that Democrats and Republicans have serious differences. 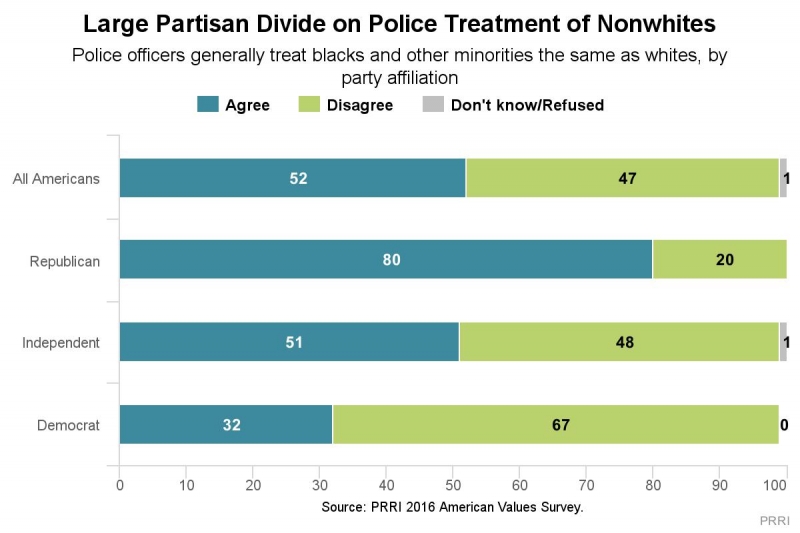 Partisan gridlock and distrust of the political system are leading many Americans to see an authoritarian leader as the only way to get things done, which is what scares Dionne.

A significant portion of the country (47 percent) agrees that “because things have gotten so far off track in this country, we need a leader who is willing to break some rules if that’s what it takes to set things right.” While 52 percent disagree, 47 percent is still a huge number who would like an authoritarian leader. A majority (55 percent) of Republicans want such a leader, while a majority (57 percent) of Democrats disagree.

Jones believes that a strong leader who promises to shake things up is attractive to “Americans who see a very non-responsive political system to their situation.” They feel the parties are not in tune with them, the government is not attune to them, nobody’s got their back.

Disagreements plus lack of confidence in the political system is a dangerous mix. It can lead to the election of an authoritarian leader who could ignore laws and constitutional procedures in order to get things done. Many democratic countries have turned to dictators when they despaired of political establishments willingness and ability to get things done. We saw this happen recently in the Philippines.

During the Depression, Franklin Roosevelt feared that if the New Deal failed, the country would turn either to Huey Long on the left or Douglas MacArthur on the right. The PRRI survey shows that as a country we are approaching a political precipice. If we do not change direction and restore confidence in the political process, we could go over.

Dionne suggests that if Clinton wins, she should go to areas of the country where Trump supporters predominate to show that she is concerned about their problems.

Henry Olsen of the Ethics and Public Policy Center agrees and stresses the importance of listening to those who feel excluded, who “find Trump’s authoritarian demeanor reassuring rather than frightening.”

“When people feel excluded from the normal processes and from a society,” says Olsen, “they will endorse extreme measures in order to ensure that they get part of that society.”

Today, lots of people feel excluded: Blacks, Hispanics, white evangelicals, and white men with less than a college education. All of them need to be included in the conversation about the future of America.