Antitrust efforts have gone in dustbin of history 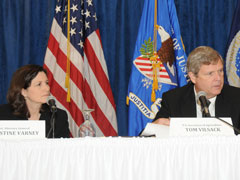 Christine Varney of the Justice Department and Agriculture Secretary Tom Vilsack listen during a workshop with poultry farmers in Normal, Ala., May 21, 2010. (USDA photo)

The food we eat is increasingly part of a globalized and industrialized concentrated system. Researchers point to a growing consolidation in food production, processing and distribution. Four or five companies control thousands of brands. Poultry growers have one-sided contracts, pig and beef producers increasingly are forced to give up independence for contracts to produce in confined animal production units. Farmers are increasingly treated like serfs on their own land.

President Theodore Roosevelt, in his efforts to break up monopolies, tackled such concentration in the meat industry. In the spirit of his antitrust efforts, the Packers and Stockyards Act of 1921 challenged the market power of stockyards and processors. Such anti-monopoly measures resulted for a while in a more diversified system for meat production and kept livestock producers in business. But this process of food industry justice has weakened since the Reagan era.

The mantel of “trust-busting” was invoked recently by President Barack Obama in his Osawatomie, Kan., speech on Dec. 5. Built around capturing the progressive vision of that great trust-buster, Teddy Roosevelt, Obama said: “Roosevelt also knew that the free market has never been a free license to take whatever you can from whomever you can. He understood the free market only works when there are rules of the road that ensure competition is fair and open and honest. And so he busted up monopolies, forcing those companies to compete for consumers with better services and better prices. And today, they still must.”

The vision articulated is correct, but the Obama’s administration’s implementation in the meat industry has been an abject failure.

In 2008 the federal farm bill instructed the Department of Agriculture to write rules for competition in the meat industry. This directive was to complete the details lacking in the legislation on the meat industry from 1921. That legislation was to be enhanced with detailed directions on contracts, antitrust policies, and mandates requiring greater justice in meat production, processing and distribution. The rules were to be developed by a small administrative unit of the U.S. Department of Agriculture: the Grain Inspection, Packers and Stockyards Administration. J. Dudley Butler had a career as a plaintiff’s attorney challenging poultry companies’ control of the poultry industry. The Obama administration brought him in to direct the antitrust effort in the meat industry.

This was a conscious effort by the Obama administration to tame the meat industry and challenge its control by a few corporations. The effort involved a historic collaboration between the Department of Justice and the Department of Agriculture on antitrust issues in the meat industry. Secretary of Agriculture Thomas Vilsack and U.S. Attorney General Eric Holder presided at every workshop: in Iowa, Wisconsin, Alabama, Colorado and the District of Columbia.

New antitrust staffing was brought in: Christine Varney and Philip Weiser at the Justice Department; John Ferrell and Butler at the USDA. A series of national and regional workshops on the theme of antitrust in the meat industry were held across the country. At the administration’s invitation, the public submitted more than 60,000 comments on the proposed rules.

I attended four out of five such meetings. In Colorado there were thousands of beef producers eager to hear the advocacy for fairness of the Obama administration. In Alabama, poultry producers were encouraged when Varney, acknowledging threats to poultry producers who complained about attacks to their livelihoods by powerful companies, handed over her business card to a grower telling him to call her if he is so threatened. If he called today there would be no one to answer.

I knew Butler because I am an officer in the Organization for Competitive Markets and have been for close to 15 years. Butler was a member of the organization. He announced the government’s program seeking greater justice in the meat industry at one of the organization’s annual meetings in August 2009 in St. Louis. With corporate agribusiness fiercely and unrelentingly attacking the agency and the rules — rules announced by the USDA and supported by thousands of farmers and ranchers — the administrations’ leaders in the antitrust effort gradually left the administration: Ferrell, Varney, Weiser and Butler. There was very weak pushback from the administration to the attackers. The administration did not stand its ground and did not support the follow-through required in what it started.

The Obama administration lifted up hopes and dashed them to the dustbin of history. While they quote Teddy Roosevelt, they failed to follow through, a terrible and historic defeat at the hands of the corporate meat industry. Despite our appreciation of Roosevelt’s trust-busting, those of us seeking a just food system will have to work harder now that this government’s effort to occupy the food system has collapsed.

The hand-waving and booming threats of this administration on challenging inequality in the marketplace sound rather hollow to me. The example of these antitrust efforts gives me no hope in this government’s capacity to effectively lead the charge.

[Holy Cross Br. David Andrews is a senior representative for Food & Water Watch. He was executive director of the National Catholic Rural Life Conference for 13 years.]

Politics | Antitrust efforts have gone in dustbin of history

Reporting on anti-war Catholics and the FBI