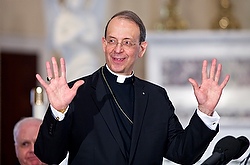 Archbishop William E. Lori smiles as he accepts applause during a press conference March 20 at the Basilica of the National Shrine of the Assumption of the Blessed Virgin Mary in Baltimore. (CNS/Catholic Reivew/Tom McCarthy Jr.)

WASHINGTON -- The U.S. Catholic church's challenges to the federal government's contraceptive mandate under the health care law is not an attempt to "throw" the presidential election in favor of one candidate or against another, said the chairman of the bishops' Ad Hoc Committee on Religious Freedom.

Speaking with members of the Catholic Press Association in a conference call Wednesday, Baltimore Archbishop William E. Lori said the bishops' campaign emerged because of the federal government's attempt to force religious organizations to pay for health services that violate fundamental religious principles.

The mandate was announced Aug. 1 as part of the rules the Department of Health and Human Services is issuing to implement the Patient Protection and Affordable Care Act passed in 2010. Along with the mandate, HHS released a four-pronged religious exemption that has raised objections among Catholic church officials and others who say it is so narrow that most religious employers will not qualify.

On Jan. 20, HHS announced that nonprofit groups that do not provide contraceptive coverage because of their religious beliefs will get an additional year "to adapt to this new rule."

The issue has been portrayed in the media and by supporters of the mandate, however, as a "war on women," Lori said, making the bishops' stance much more difficult to explain to the public.

That challenge, he explained, led to the development of the "fortnight for freedom" campaign, a two-week period of prayer, education and action aimed at explaining how the mandate violates religious principles.

A wide-ranging effort is needed to help the public understand the dangers the mandate poses, he added.

"One step about defending religious liberty is to talk about, to make sure people understand religious liberty is not given by government but by God. It means more than going to Mass on Sunday but to live one's life and conduct one's professional existence in accord with one's convictions," the archbishop said.

The U.S. campaign has taken on added importance, he said, because people are struggling to maintain their religious freedom around the world. "We are engaged in the domestic struggle because we believe we have to keep the torch of freedom alive at home so as to be a beacon around the world," he said.

The bishops' conference planned to closely monitor the lawsuits filed May 21 by 43 Catholic dioceses, schools, hospitals, social service agencies and other institutions challenging the HHS mandate, Lori said. A total of 12 lawsuits were filed in federal court around the country.

The bishops and dioceses across the country must plan for any and all alternatives, whether the Catholic entities win or lose, he said.

"Even if we win the HHS lawsuits, the larger cultural issue of preserving religious liberty and the place of religion in our culture is something we're going to have to engage in for many years to come," he added. "There's defending marriage and unborn life. It's a long-term proposition."

Book review: 'The End of White Christian America' part I