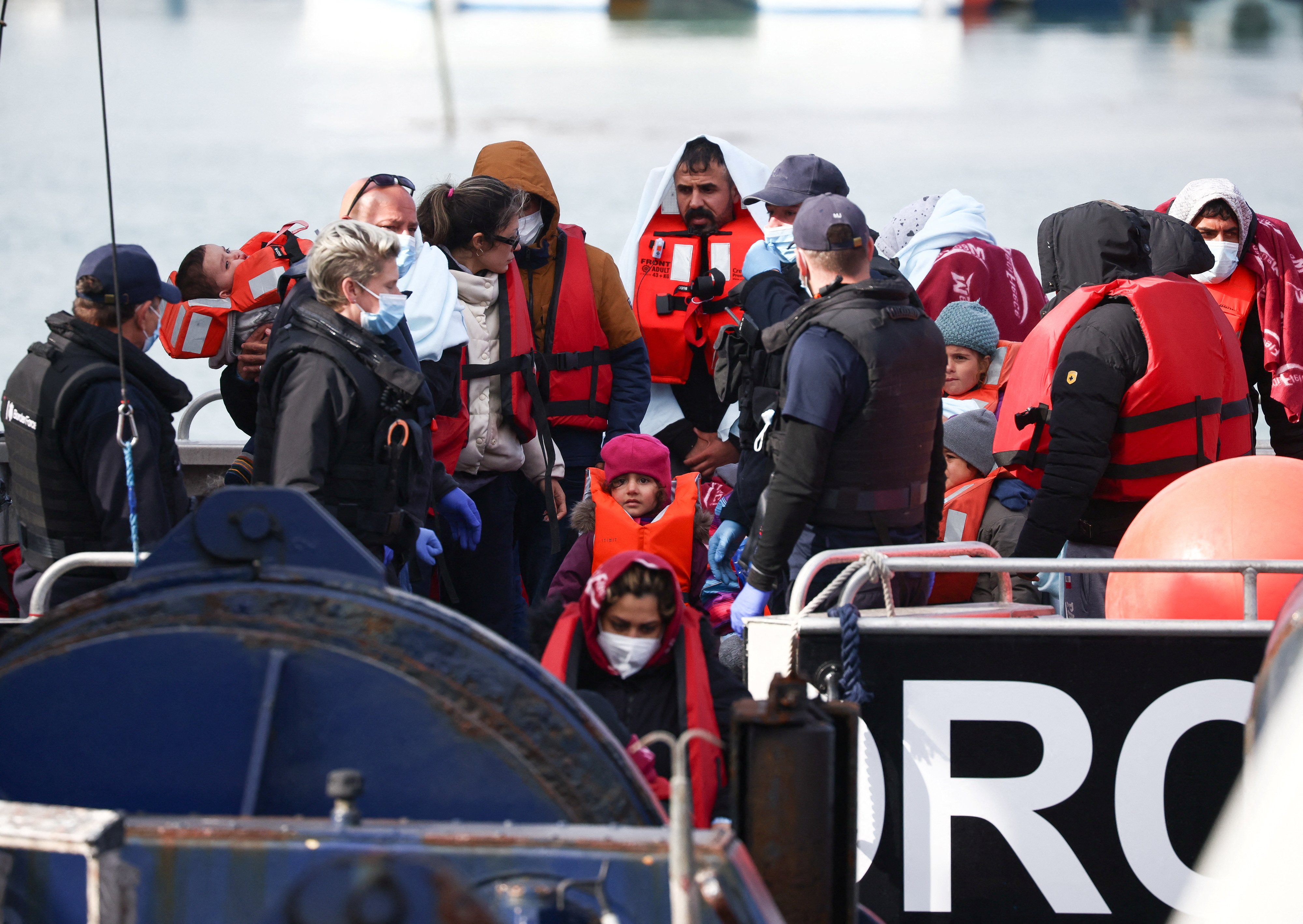 Migrants are escorted by military personnel after being rescued while crossing the English Channel in Dover, England, May 1, 2022. (CNS photo/Henry Nicholls, Reuters)

MANCHESTER, England — The U.K. government is unfairly punishing English Channel migrants for the crimes of human traffickers by sending the migrants to Rwanda to have asylum applications processed, said the English and Welsh bishops.

In a statement issued May 9, the bishops said a plan aimed at keeping people from entering England illegally by small boats failed to treat the migrants justly and to honor "their dignity as human persons."

"Our Christian faith demands that we respond generously to asylum-seekers, whose dignity must be protected and upheld," the statement said.

"Those seeking refuge in the U.K. should be provided with safe routes for traveling, have the opportunity to tell their story, be listened to and have their cases assessed justly," said the statement. "We keep in mind that there is no illegal asylum-seeker — to claim asylum is a human right."

"People smugglers and modern-day human traffickers profit from the desperation and misery of refugees," the bishops continued. "We fully support their prosecution. It is imperative, however, to make a clear distinction between victims and those who exploit them. Crime is defeated by confronting the perpetrators, not by punishing the victims."

Speaking to journalists in an online news conference May 9, Cardinal Vincent Nichols of Westminster said the statement was accepted unanimously by the bishops at their plenary assembly in Cardiff, Wales, May 2-6.

He said the plan, introduced through the Nationality and Borders Act 2022, was wrong because it outsourced the responsibility of the government to process claims for asylum to another country.

"Clearly, we accept the complexity of these processes. We clearly accept the weight of responsibility on (the) policy maker," said Cardinal Nichols, president of the English and Welsh bishops' conference. He said the Act failed "to provide due process for the testing of claims."

"Policy should not be aimed at mistaken targets," he said. "We suggest that the Act threatens to criminalize people who have been victims ... and has the potential to start a process by which they could be deported."

The 120 million-British-pound deal with Rwanda means all single men who arrive by small boats on U.K. shores will be sent some 4,000 miles away while their asylum claims are processed.

Prime Minister Boris Johnson has insisted that the plan is "morally right," because he believes it will reduce the risk of migrants drowning as they attempt to cross the stretch of water between England and France. He also seeks to disrupt the business model of human traffickers, who charge migrants large sums of money for passage in a boat.

The majority of migrants, mostly from the Middle East and Africa, who attempt to enter England illegally by this route have already passed through several safe European countries where they could have claimed asylum.

In 2021, more than 30,000 migrants entered England illegally by crossing the Channel, but others died trying, with 27 drowning on one occasion in November.

At their plenary meeting, the bishops also announced they would restore the obligation for Catholics to attend Mass on Sunday and holy days in England and Wales for the first time since the first national lockdown against COVID-19 more than two years ago.

In a statement released May 9, the bishops said the "pressing challenges of the pandemic have lessened significantly," and they believe "that the reasons which have prevented Catholics from attending Mass on Sundays and holy days of obligation no longer apply."

"We thank God that this situation has now changed," they said in the statement.

The obligation will be restored on Pentecost, June 5. In Scotland, it was restored March 6, the first Sunday of Lent, but with a government rule that the faithful must wear face covering.

In England and Wales, however, nearly all restrictions — including the use of face masks — were scrapped soon after Christmas.