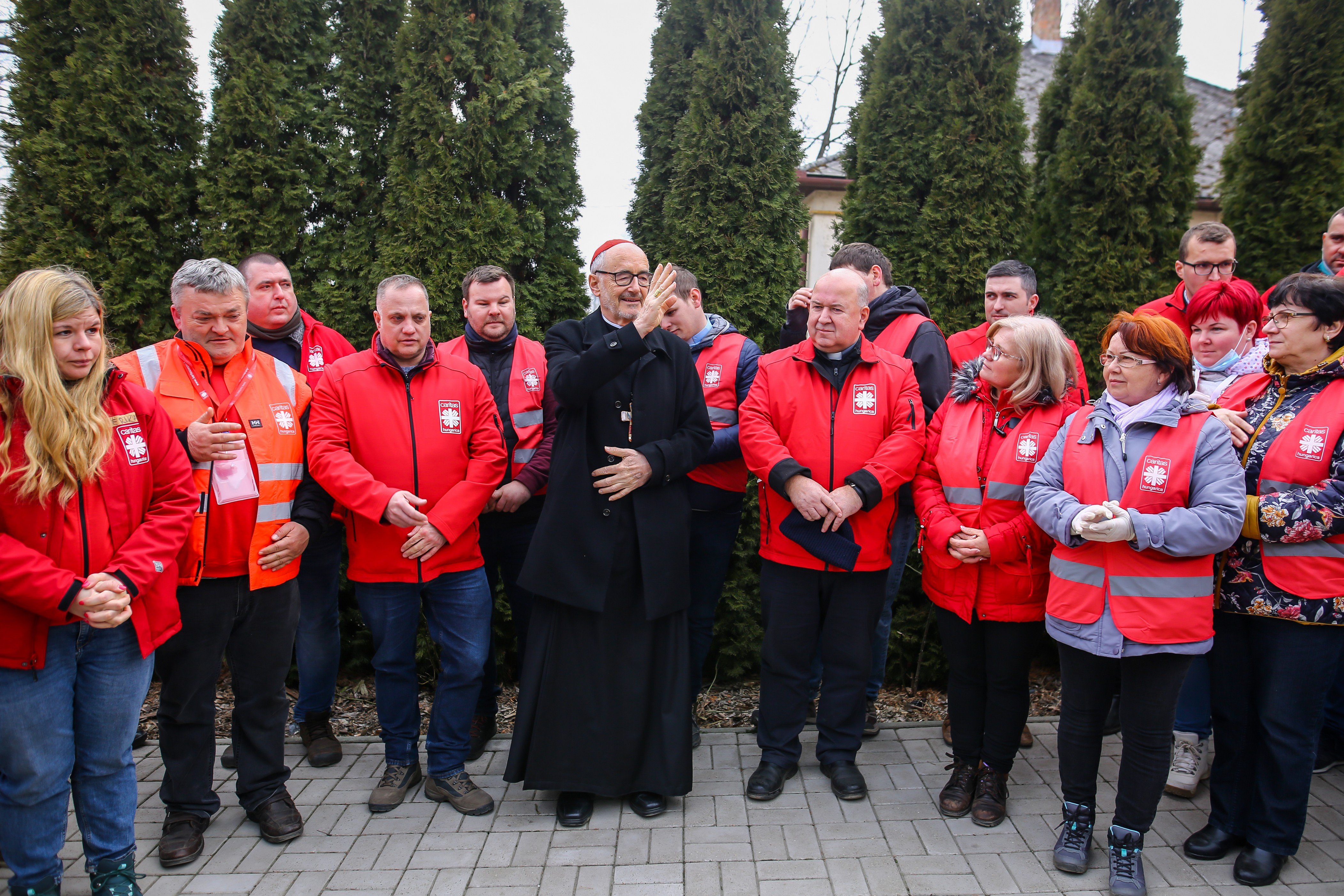 Canadian Cardinal Michael Czerny, interim president of the Dicastery for Promoting Integral Human Development, is pictured with Caritas workers as he gives a blessing during a visit with Ukrainian refugees in Barabás, Hungary, March 9, 2022. (CNS photo/courtesy Lambert Attila/Magyar Kurír)

VATICAN CITY — Continuing the mission entrusted to him by Pope Francis, Cardinal Michael Czerny visited Slovakia and a Ukrainian border town to convey the pope's closeness to victims of Russia's war against Ukraine.

After meeting with refugees at the Hungarian-Ukrainian border in early March, Cardinal Czerny visited the eastern Slovak city of Košice March 16 and met with Eastern- and Latin-rite Catholic bishops before traveling to the border village of Vyšné Nemecké with Archbishop Cyril Vasil of Košice, Vatican News reported.

The next day, the cardinal crossed the border into Ukraine, visiting a seminary in Uzhhorod, where students from other seminaries in Kyiv, Vinnytsia and Mukachevo, as well as several missionary families from the Neocatechumenal Way, were staying.

In a video posted March 17 on the Twitter page of the Dicastery for Integral Human Development, Cardinal Czerny told the priests and seminarians he was happy to visit and "bring you greetings directly from the Holy Father."

Pope Francis, he said, "wants you to know that he is with you. He is counting on you to bring Christ in these terrible conditions."

Meeting with volunteers in Slovakia, Cardinal Czerny said borders should be "a place of encounter, not a place of division."

"I am so happy to see how everyone is working together to meet the needs of the people who are fleeing for their lives and where they can have their first security and their first rest and take the next steps," the Canadian cardinal said, according to a video broadcast by the Slovak Catholic news channel Logos TV.

"It's a blessed place, and I pray for everyone who is working here and bring warm greetings from Pope Francis," he said.

The cardinal greeted volunteers and heard the stories of refugees from Kyiv, Kharkiv and Donetsk who fled the horrific attacks by Russian forces.

Jesuit Father Petr Vacík, a Vatican News journalist accompanying Cardinal Czerny, reported that "on the faces of people listening to him, you can see traces of fear, horror of uncertainty, but also hope."

Archbishop Vasil told Vatican News that the cardinal's visit was "a testimony to the generosity and solidarity of the Holy Father."

"All Ukrainians with whom the cardinal met — believers and nonbelievers, Ukrainian-speaking and Russian-speaking — saw in his face the proof that the civilized world, the Catholic Church and the people who received them were close to them," he said.

According to Vatican News, Archbishop Vasil said he and Cardinal Czerny also visited a parish and a sports center converted into a refugee center, where they spoke with refugees and volunteers.

The archbishop said the volunteers shared with the cardinal some of their experiences and what they had heard from the refugees.

One volunteer said a refugee asked to call her husband, who was in Ukraine serving in the military, to let him know she had arrived safely only to have another soldier answer the phone and inform her that her husband was killed in action, he said.