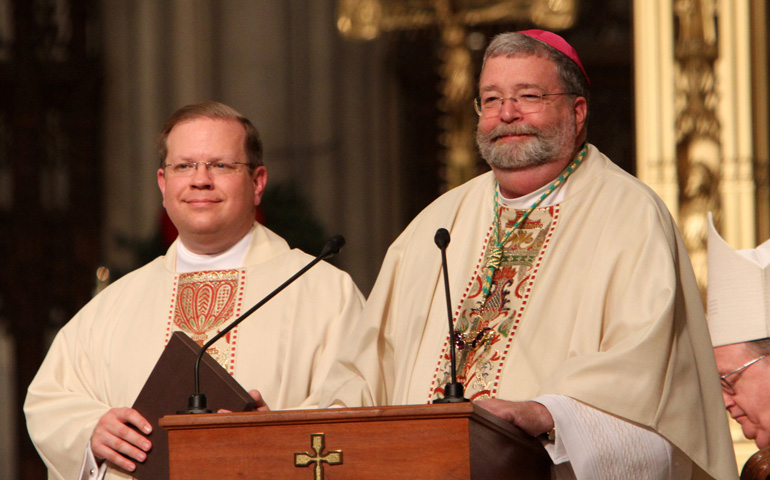 Bishop Daniel R. Jenky of Peoria, Ill., right, smiles as he addresses the assembly during a memorial Mass for Archbishop Fulton J. Sheen at St. Patrick's Cathedral in New York in 2009. Msgr. Stanley Deptula, executive director of the Peoria-based Archbishop Fulton John Sheen Foundation, is at left. (CNS/Gregory A. Shemitz)

A number of Roman Catholic bishops are making forceful last-minute appeals to their flock to vote on Election Day, and their exhortations are increasingly sounding like calls to support Republican challenger Mitt Romney over President Barack Obama.

The most recent example: a letter from Illinois Bishop Daniel Jenky accusing the administration of an unprecedented "assault upon our religious freedom" and implying that Catholics who pull the lever for Democrats who support abortion rights are like those who condemned Jesus to death.

"Since the foundation of the American Republic and the adoption of the Bill of Rights, I do not think there has ever been a time more threatening to our religious liberty than the present," Jenky writes in the letter, which he ordered priests in his Peoria diocese to read at all Masses on Sunday.

In the letter, Jenky blames Obama and the Democratic majority in the Senate for trampling on the Catholic church's rights and moral convictions by requiring health insurers to provide contraception coverage. Jenky also compares abortion rights supporters to the Jewish crowd in Jerusalem that pledged loyalty to the Roman Empire and demanded that Pontius Pilate crucify Jesus.

"For those who hope for salvation, no political loyalty can ever take precedence over loyalty to the Lord Jesus Christ and to his Gospel of Life," Jenky writes.

Jenky's broadside is especially powerful and -- to his critics -- partisan. But it is not an isolated case.

On Thursday, the bishops of Pennsylvania -- a crucial battleground state where most Catholics are currently supporting Obama -- released a letter to voters declaring that policies on contraception, abortion and gay rights backed by the White House and Democrats meant the nation was "losing its soul by little steps."

In Wisconsin, Green Bay Bishop David Ricken wrote an Oct. 24 letter saying the Democratic platform's support for abortion rights and same-sex marriage and other "intrinsic evils" made it impossible for Catholics to support the party without putting their souls at risk.

That same day, Brooklyn Bishop Nicholas DiMarzio's column in the diocesan newspaper said voting for a candidate who supports policies on contraception coverage and abortion rights -- as Obama does -- "stretches the imagination, especially when there is another option."

Across the continent in Alaska, Juneau Bishop Edward J. Burns wrote a column in the local newspaper on Oct. 27 comparing Vice President Joe Biden's support for abortion rights to supporting slave owners in the antebellum South, and he questioned Biden's character and Catholic faith.

Numerous other bishops, from Newark, N.J. to Springfield, Ill., to Colorado Springs, Colo., have made similar appeals. They always stress that they are not endorsing any particular candidate but frame their statements by listing a set of "non-negotiable" issues that start with opposition to abortion and go on to include other policies that Republicans generally support and Democrats generally oppose.

They often add warnings about voters' standing as Catholics or their eternal salvation if they make the wrong choice.

The Catholic hierarchy's growing support for Republicans in recent years is no secret, and the bishops have been especially critical of Obama since he was elected in 2008. But longtime church-watchers say the substance and tenor of the statements in this campaign stand out.

"Yes, the bishops, some of them anyway, are more active this year. The tone -- again, of some -- is more stark," said Russell Shaw, a former spokesman for the U.S. Conference of Catholic Bishops who writes on the church and politics for Our Sunday Visitor and other publications.

Shaw said the "perceived stakes" in this election have much to do with the more urgent tone -- a fear that the Catholic church, and faith in general, is being driven from the public square, and that the viability of many church-related institutions is in peril due to government policies.

There is also the fear, he said, that American society is ready to embrace greater rights for gays and lesbians and maintain or expand on current abortion policies.

Catholics who support Obama don't see it that way. Responding to Jenky's letter, James Salt, executive director for Catholics United, a progressive group, said Jenky was "using the pulpits of his diocese for partisan proclamations" and he said that was not only wrong but was driving young people away from the church.

"By brazenly violating IRS and church guidelines against partisan activity, Bishop Jenky has shown that he is more interested in following the paths of Jerry Falwell and Pat Robertson than the Gospel of Jesus Christ," Salt said. "As more and more younger Catholics abandon the faith on account of the bishops' far-right politics, Bishop Jenky should ponder how his antics will affect the relevance of the Catholic bishops for generations to come."

But Shaw said the bishops see the latest developments as historic threats that require them to speak out as pastors.

"What they are doing isn't partisan in intention," he said. "If Romney is elected, you can expect them to be critical of him."