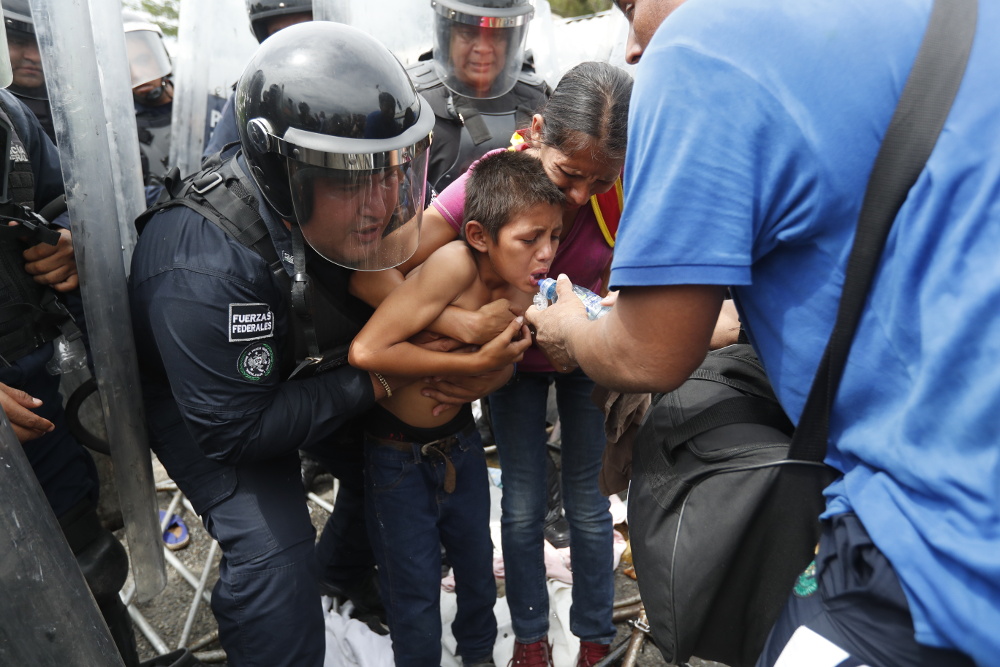 A young boy heading to the United States with other migrants from Central America is given water by Guatemalan police Dec. 19. (CNS/Reuters/Esteban Biba)

Immigration officials announced new health checks for immigrant children under detention after a second child, an 8-year-old boy, died Christmas Eve while under the agency's care.

"This is a tragic loss. On behalf of U.S. Customs and Border Protection, our deepest sympathies go out to the family," said Commissioner Kevin McAleenan in a Dec. 25 statement. He explained new measures for dealing with detained immigrant children and released more details about what happened leading up to the boy's Dec. 24 death.

But Catholic groups such as the Hope Border Institute in El Paso, Texas, said the death could have been prevented if U.S. authorities were not blocking migrants from entry points where they can legally ask for asylum. Instead, they said, migrants are driven to enter through more dangerous locations, where they experience dehydration and other dangers, or they are sent to crowded locations not fit to house children.

"This was bound to happen," said Dylan Corbett, executive director of the Hope Border Institute. "It's completely unacceptable. Children are not supposed to be housed at a checkpoint."

According to the statement by Customs and Border Protection, the agency charged with border control, the child and his father were apprehended Dec. 18 "west of the Paso Del Norte Port of Entry in El Paso, Texas, for illegal entry."

Between then and Dec. 24, they were moved around several locations and were given food and water and provided "welfare checks" throughout the journey. The agency's account said that on Dec. 24 in the morning, an agent noticed the child had "glossy eyes" and was coughing. He was sent along with his father to a general hospital for "possible influenza symptoms" and given Tylenol and another medication.

After being released from the hospital the same day, the boy and his father were taken to "temporary holding" at a highway checkpoint, the agency said, where later that evening the child vomited and "appeared lethargic." Because of the child's worsening condition, later in the evening authorities sent the pair back to the hospital.

On Dec. 24, en route to the hospital, the boy began to vomit once again and lost consciousness, the agency's statement said, and hospital staff were not able to revive him. The boy was pronounced dead just before midnight, according to Customs and Border Protection.

While the agency has not released the boy's name, a statement from the Congressional Hispanic Caucus identified him as Felipe Alonzo Gomez of Guatemala. He is the second child identified as dying while under detention by U.S. border authorities in December. Earlier in the month, authorities said 7-year-old Jakelin Caal, a girl, also from Guatemala, died of dehydration while under Border Patrol custody.

"We had the death of yet another young child, and that is very troubling," Corbett said in a Dec. 26 telephone interview with Catholic News Service from El Paso. "I don't know if this is politics, I don't know what's going on, but this game that politicians are playing in Washington (dealing with) the border is proving deadly."

"While parents across the U.S. woke to celebrate Christmas morning with their children, Felipe's father, who traveled with him (and his mother who remained in Guatemala) mourned the loss of their young boy," said Christopher Kerr, executive director of the Ignatian Solidarity Network based in Ohio. "Felipe's death is a reminder that children and their parents are coming to our border in the same state that the baby Jesus faced as Mary and Joseph struggled to find a safe place for his birth — vulnerable and at risk. As Christians, we are called to respond with compassion, love and hospitality."

The group made an effort to get more than 1,000 people to send virtual Christmas cards "to Congress and President Trump specifically about care for those who are seeking asylum," Kerr said.

But the irreversible loss of another child's life is "a tragic example of the desperate need our country has for humane migration policies that respect the dignity and rights of all people," Kerr said.

"The Ignatian Solidarity Network will continue to mobilize our network to call on our elected leaders to ensure our government protects the most vulnerable — especially refugees and asylum seekers, while also responding the root causes of migration through long-term solutions."

Customs and Border Protection said it would seek immediate health checks for all children under its custody, "with a focus on children under 10 years old."

The Washington Post reported Dec. 26 that U.S. Department of Homeland Security Secretary Kirstjen Nielsen will be sending medical corps from the U.S. Coast Guard to the southern border "to screen immigrants following the deaths of two young children from Guatemala who were in federal custody."

She also is set to visit temporary holding facilities for migrants in late December and will send officials from the Centers for Disease Control to investigate, the newspaper reported.

"We shouldn't have had to wait until two children died for this to happen," Corbett said. "My prayer this Christmas is that the deaths of Jakelin and Felipe are not meaningless. I hope their deaths mark the end of something and the beginning of something new. Children should not be dying. This is not a game."