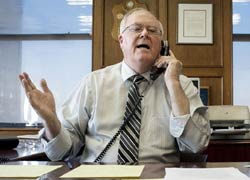 Catholic League president Bill Donohue making a point on the telephone in his office.

Looks like Joe Feuerherd doesn't like me ("Billy the bully is bad for the church," May 11). Let's go through his gripes, one by one.

Like so many other left-wing Catholics, Feuerherd thinks I make too much money. My goal in life, actually, is to make as much money as Sr. Carol Keehan, who cleared $963,436 last year as president of the Catholic Health Association. In fact, I would settle for making as much as Sr. Patricia Talone, the VP for Mission Services: she makes $394,092.

Please note, too, that the latest figures show that the Catholic League has amassed over $26 million (not $22 million as reported). Not bad considering that when I took over as president 17 years ago we had $400,000 and were losing upwards of $20,000 a month.

My board of directors and our members hold me accountable, but I couldn't help but notice that many of those who commented on Feuerherd's online article wondered why I have not been reined in by the bishops. And I thought you guys were against such censorship.

Hollywood is not run by Chinese Taoists, nor does it make movies endearing to Catholics. As the Forward, a Jewish weekly, said a few years ago, it is merely a "sociological observation" to say that "Jews run Hollywood." Was it wrong?

In the 1990s, some seminarians from the Legionaries of Christ supposedly said that Father Marcial Maciel told them that he had gotten the green light from Pope Pius XII to have sex with them for the purpose of "relief." I mocked this absurd story. Feuerherd evidently believes it. I am delighted to know he does.

The story about the Republican operative who had to resign after Feuerherd broke the story about what happened when he was a Fordham professor is misleading. I put out a statement on the morning of August 19, 2004 based on a story that day in The New York Times. All the Times said was that the professor resigned after charges of sexual harassment were made by a co-ed who got drunk with him one night. The Times also said that it was believed that the source of this outing was the National Catholic Reporter.

The details of what happened, which were much more disturbing than what the Times said, were not published until 1:57 p.m. that day. In other words, Feuerherd is criticizing me for what I said before I learned the whole story. No matter, what was also disturbing was the graphic detail that Feuerherd went into describing the sex acts. He didn't have to do that, but the fact that he did speaks volumes.

What is really driving Feuerherd's anger are my comments to the media regarding the fact that most of the sexual abuse in the Catholic Church is the work of homosexual priests. It is. Kevin Cullen, who won a Pulitzer Prize for his reporting on the priestly sexual abuse scandal in The Boston Globe, summarized the findings of a study by the John Jay College of Criminal Justice: "Of the 10,667 reported victims [between 1950 and 2002], 81 percent were male, the report said, and more than three-quarters of the victims were post-pubescent, meaning the abuse did not meet the clinical definition of pedophilia." Which obviously means this was the work of homosexuals. By the way, the American Pediatric Association defines puberty as beginning at age 10 for boys.

Cullen also interviewed Robert S. Bennett, the Washington lawyer who headed the National Review Board that prepared a report on this issue. After saying that there were many fine homosexual priests, he said that "any evaluation of the causes and context of the current crisis must be cognizant of the fact that more than 80 percent of the abuse at issue was of a homosexual nature."

If we are to get to the bottom of this problem, we must stop the cover-up and start telling the truth: the link between homosexuality and the molestation of minors is real. In any event, it's a moot point since practicing homosexuals have been barred from the priesthood, thus resolving the problem.

Feuerherd needs an editor. He says I have "strange company," citing my affiliation with the Catholic Citizens of Illinois, a group founded by Tom Roeser, a pundit who has roiled Cardinal George. My association is that of a letterhead advisor and my contacts with Mr. Roeser are zilch: I met him once several years ago. In any event, two paragraphs later, Feuerherd makes an unrelated comment deploring "Joe McCarthy's guilt-by-association tactics." Does he even realize how hypocritical he appears?

These are tough times for struggling Catholic journalists on the left. But not for me. After four years in the U.S. Air Force, four more as a teacher in Spanish Harlem and 16 years as a professor (including a year as a scholar in residence), I found my dream job. But it is demanding.

I am busy writing daily news releases (often several a day), writing a monthly journal, contributing to an annual report, writing all the fund-raising letters (we don't need a director of development), offering information and advice to our direct mail agents, preparing a budget, writing newspaper and magazine ads, penning essays and op-eds, granting interviews, teaching part-time at New York University, giving talks around the nation, doing non-stop radio and TV (we don't need a publicist—they come to me), writing books (my fourth was published last year and I am now working on another), accepting awards, debating my adversaries, writing to the bishops, etc.

Finally, it is not true that I take a cab to the network and cable studios. They always send a limo.

[William A. Donohue is president of the Catholic League for Religious and Civil Rights.]

A return to the legal definition of religious freedom