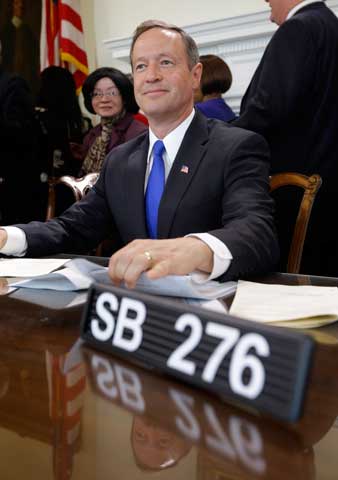 Gov. Martin O’Malley after signing a bill abolishing capital punishment in Maryland during a ceremony in Annapolis May 2, 2013 (AP Photo/Patrick Semansky)

As Washington settles in for more and more gridlock, and hyperpartisanship spreads out from the nation's capital to the heartland, threatening the historically more congenial environs of state legislatures, one group of veteran political operatives remain deeply committed to making the government serve the common good. State Catholic conferences across the nation work in all-red and all-blue states and in states with divided governments, seeking to bring often divergent groups together in pursuit of the common good.

John Huebscher has been working at the Wisconsin Catholic Conference for 27 years. The Badger State is now controlled entirely by Republicans, but the Wisconsin Catholic Conference agenda remains decidedly nonpartisan. The conference will be allied mostly with Democrats seeking Medicaid expansion in the state. In its efforts to expand a parental choice program that would help Catholic schools become more financially viable, the conference will be mostly allied with Republicans.

"I think it typifies the fact that we don't fit partisan categories," Huebscher said about these two top legislative priorities.

Another issue that the conference will be working on, reform of the criminal justice system, was once almost exclusively a concern of liberals.

"But, it turns out, incarceration is a budget buster," Huebscher said, and so conservatives are now showing an interest in fixing the state's broken system.

Every legislative session is dominated by political fights over the state's budget. "It always presents an array of challenges and opportunities," Huebscher said.

The Wisconsin Catholic Conference's top priority will be protecting programs that assist the poor, a position that will mostly align with the political preferences of Democrats. But, in urging the state to adopt a ban on abortions after 20 weeks of pregnancy, the conference will be working mostly with Republicans.

For the director of the California Catholic Conference, Ned Dolejsi, the situation is reversed: He contends with a state government that is dominated by the Democrats. Unlike the hostility that has characterized the relationship between the U.S. Conference of Catholic Bishops and the Obama administration, in Sacramento, the California conference has found many areas of cooperation with the state house.

"The state just announced 16 grants to groups that will be funded to provide services to unaccompanied minors [who crossed the border from Mexico without legal papers], and six of those groups are church-related," Dolejsi said.

In addition, the California Catholic Conference helped secure a veto from Gov. Jerry Brown of a bill that would have given public schools a virtual monopoly over early childhood education. In his veto statement, the governor explicitly mentioned parental rights in deciding where to send their children.

"We support early childhood education very much, but we want a diverse delivery system," Dolejsi said. He is also working to build support for a bill that would give tax credits to teachers who work in tough neighborhood schools and which would apply equally to teachers in public or private schools.

It is not all sweetness and light in Sacramento to be sure. Last year, the state's Department of Managed Health Care issued a directive that all health plans in the state cover elective abortions, including late-term and gender-selection abortions.

"The state misread the law," Dolejsi said. The California conference has filed a complaint with the Civil Rights Division of the federal Health and Human Services Department challenging the directive.

California is a state in which many issues are put directly to voters in the form of referendums. Last year, the conference was deeply involved in the successful effort to pass Proposition 47, which reforms the state's criminal justice system.

"It moves us away from locking people up for longer and longer sentences and towards restorative justice. It will lessen the problem of overcrowding in the prisons," Dolejsi said. He also noted that the conference worked with the Jesuit-founded advocacy group PICO to help rally support for the proposition, building on their network of parish activists.

The Maryland Catholic Conference has helped the state pass an increase in the minimum wage, protect social services in the budget, defend the rights of immigrants and -- in what executive director Mary Ellen Russell calls the "crowning achievement" of recent years -- pass a repeal of the state death penalty. As a bonus, just before he left office, Gov. Martin O'Malley commuted the sentences of four people on death row who were not affected by the repeal, and will now face life in prison and not death.

Part of the job of a state Catholic conference is lobbying on key pieces of legislation, but another part of the job is working on the implementation of laws already passed.

"Catholic Charities works with state agencies," Russell explained, "but the conference helps them deal with the implementation of a variety of policies in education, health insurance and immigration initiatives."

In several states, including Maryland, the state health commissioners did not guarantee that the state health exchange set up under the Affordable Care Act included a policy that did not cover elective abortion, something the act required. As well, the Maryland conference will need to help implement the changes to the immigration system announced by Obama last year.

In these three states of Wisconsin, California and Maryland -- and I suspect the same could be said for most other states -- the state Catholic conferences are somewhat unique among the various lobbying groups.

"Having the voice of faithful people is important," said Russell. "Unlike many, we don't lie. We are up front about our positions and the reasons for them."

But the biggest difference may be found elsewhere. At a time of increasing polarization, Russell expresses a singular desire. "I hope we can play a role convincing both sides that there is a common good and we all need to work for it," she said.

A version of this story appeared in the Feb 13-26, 2015 print issue under the headline: Catholic lobbying crosses divides.