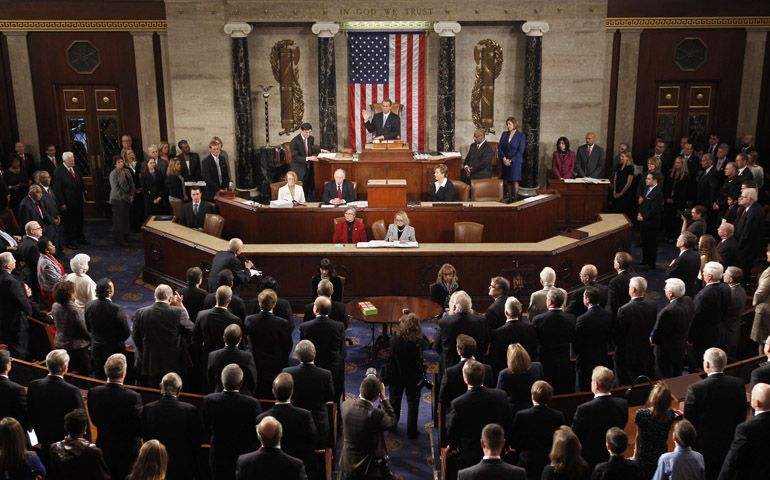 Speaker of the House John Boehner takes his oath Jan. 3 during the first day of the 113th Congress at the U.S. Capitol in Washington. (CNS/Reuters/Kevin Lamarque)

The 113th Congress includes some slight shifts in religious makeup over the previous session, with a few more Catholics, the first Buddhist in the Senate and the first Hindu to serve in either chamber.

It's a historic high for the number of Catholics in Congress, with 163, though that's just two more seats than the previous high point, when there were 161 Catholics in the 111th Congress of 2009-10.

That's an increase of seven seats over the 156 Catholics had in the 112th Congress.

Since at least the 1960s, Catholics have been the single largest denomination in Congress. Although when Protestant denominations are counted together, they still constitute the largest number of members, at 56 percent.

Another analysis finds that alumni of Jesuit colleges and universities account for almost 10 percent of all members of Congress.

According to data compiled by the Pew Forum on Religion & Public Life, Catholics now make up slightly below 31 percent of Congress, while they account for about 22 percent of the U.S. population.

Pew counted 31 freshman members of Congress as Catholics, about 37 percent of the class.

The next largest denomination in Congress is Baptists, with 9 percent of freshmen and 15 percent of incumbents. Overall, Baptists account for 14 percent of the 113th Congress, with 73 total seats, up from 68 seats in the previous session.

Fifty-eight members of Congress listed their affiliation as "other" or "unspecified," the same number as in the 112th Congress, but only one, newly elected Rep. Kyrsten Sinema, D-Ariz., described herself as "unaffiliated."

The Pew data notes that Catholics, Protestants and Jews are disproportionately represented in Congress in comparison to their percentage of the overall adult population. But even with fewer than five members in Congress, Buddhists, Muslims, Hindus and Orthodox are represented in about equal proportion to their number in the country. The same goes for Mormons, who have 15 members in Congress, just under 3 percent, and represent about 2 percent of the U.S. population.

Data compiled by the Association of Jesuit Colleges and Universities counted nearly 10 percent of Congress as having attended Jesuit higher education institutions. That includes 11 senators and 41 members of the House, who collectively attended 14 different Jesuit schools.

Nine Jesuit alumni were elected in 2012, including Sen. Mazie Hirono, D-Hawaii, who is the first Buddhist elected to the Senate (she served as a member of the House since 2007); and Rep. Hakeem Jeffries, D-N.Y., a Baptist, who both hold advanced degrees from Georgetown.