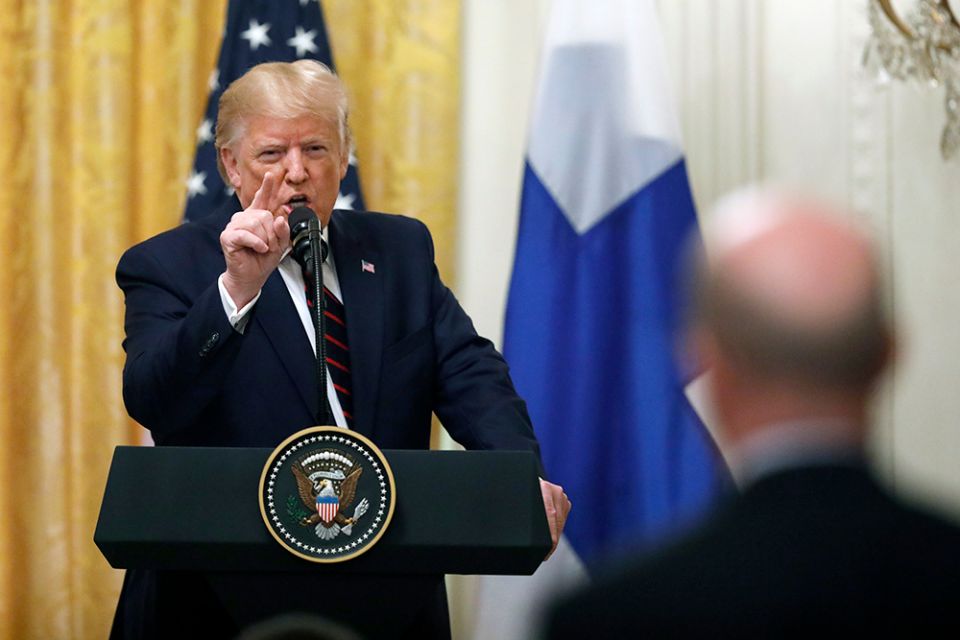 President Donald Trump speaks during a news conference at the White House in Washington, on Oct. 2, 2019. (RNS/AP/Carolyn Kaster)

More than 90 Christian leaders are calling for a National Day of Prayer this Sunday (Oct. 13) "for the truth to be revealed through the impeachment inquiry" into whether President Donald Trump solicited help from a foreign government for his 2020 reelection campaign.

That call comes from leaders affiliated with Red Letter Christians, a justice-focused Christian movement that held a revival over the weekend in Goldsboro, North Carolina.

It also includes praying for members of Congress and inviting them to worship services while home Sunday in their congressional districts.

"For the sake of our nation's integrity and the most vulnerable in our society, we call on fellow Christians to support the current impeachment inquiry. Now is the time to shine the light of truth," according to the statement released Tuesday by Red Letter Christians.

"Please join us in praying that the truth will be revealed and set us all free."

Peter Goodwin Heltzel of New York Theological Seminary, who helped organize the statement, said he was moved to action after reading evangelist Franklin Graham's remarks to Religion News Service calling the impeachment inquiry "nothing about nothing." Graham, a vocal Trump supporter, is in the middle of his own series of Decision America rallies across his home state of North Carolina.

"That was really like fighting words for me in terms of making me realize as a Christian that we have to speak out," Heltzel said.

"As a Christian," Heltzel said, "the fact that other Christians are saying this is not important I find deeply problematic because if we are going to call ourselves followers of Jesus — who said he is the way and the truth and the life — then we need to follow that way of love, embody that ethic of truth and fight for the lives of all Americans and all God's children."

While many were gathered for the Red Letter Revival, North Carolina activist and author Jonathan Wilson-Hartgrove said, "we wanted to make clear to the people of North Carolina that there's an alternative to the Jesus-and-Trump rally that Franklin Graham is having here right now."

But the Red Letter Christians' statement stressed that its call to support the impeachment inquiry is not about partisan politics. It's about "the light of truth, honesty, and transparency that this moment affords our country, whatever may be revealed," according to the statement.

"It is not a partisan issue. It's a moral issue. It's not something to engage in lightly; therefore, the call to prayer is appropriate," the Rev. Traci Blackmon of the United Church of Christ said.

And, Blackmon said, "beyond red and blue, there is right and wrong."

The pastor said she spent time in prayer before deciding to sign the statement Tuesday morning.

And she knows how she'll be leading her congregation in prayer this weekend.

"For me, the prayer for Sunday is about this impeachment inquiry, but it's also about the healing of our nation. It's also about restoring hope and restoring faith and trust in one another. It's also about diminishing divisiveness that has been growing since 2016. It's also about honoring the humanity and dignity of everyone who calls this home. So our prayers will include all of that," she said.

Organizers of the statement aren't the only leaders who have invoked prayer in the weeks since House Speaker Nancy Pelosi called for the impeachment inquiry.

Pelosi herself has continually referenced prayer in her remarks about the inquiry.

Last week, she said the inquiry needs to focus on the facts and the U.S. Constitution — and not on other objections they may have to Trump or his policies. It needs to be done "with dignity, with respect, prayerfully," she said.

And just one day after the release of the whistleblower complaint against the president, Pelosi said on MSNBC's "Morning Joe" that the inquiry was no cause for joy, adding she prays for the president "all the time."

"It's really sad. We have to be very prayerful," she said.

Jeffress recently suggested on Todd Starnes' Fox News radio show that Pelosi and others may be praying to "the pagan god of the Old Testament, Moloch, who allowed for child sacrifice" or "the god of their own imagination." He also insisted Christians remain supportive of the president.

Pelosi, who is Catholic, could not immediately be reached for comment. Catholics do not worship Moloch.

A Washington Post-Schar School poll released Tuesday found more than half the country — 58 percent — agrees Democrats should have opened the impeachment inquiry.

The religious left is going to miss Steve Bannon

The Donald and the Walmart moms