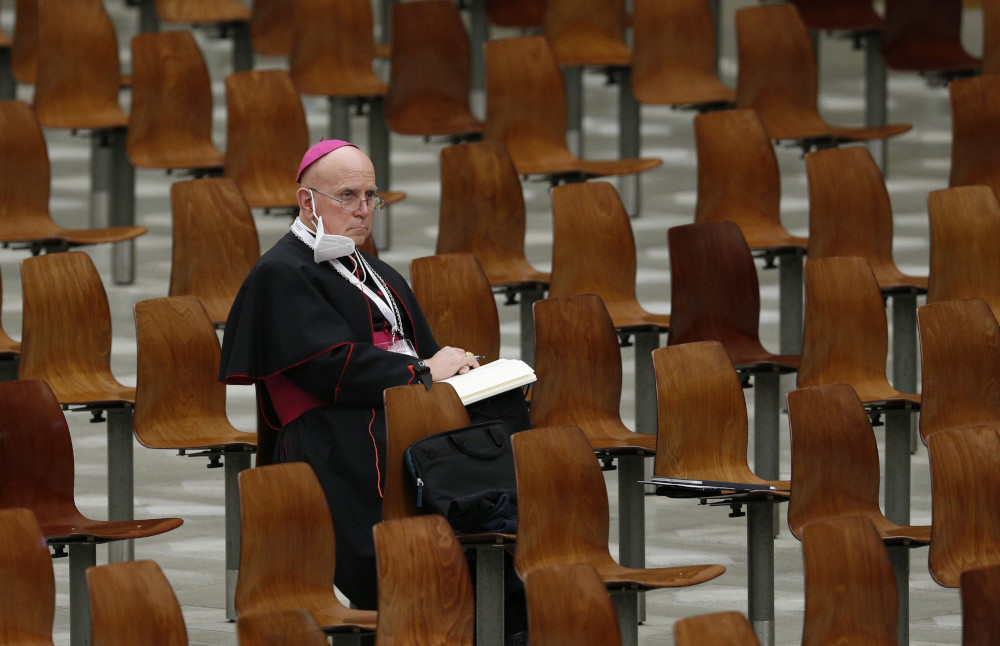 Archbishop Samuel Aquila of Denver attends an international symposium on the priesthood at the Vatican Feb. 17, 2022. (CNS photo/Paul Haring)

Catholic lawmakers in Colorado who have been asked by their bishops to voluntarily refrain from Communion say the church leaders are "weaponizing" the Eucharist to punish the legislators for their votes for an abortion rights bill.

The bishops' request, made in an open letter sent to Catholic lawmakers June 6, called voting for Colorado's Reproductive Health Equity Act in April a "gravely sinful action" that puts legislators at risk of committing a "mortal sin," defined in the Catechism of the Catholic Church as one that brings "eternal death" if the sinner doesn't seek repentance.

But Rep. David Ortiz, one of the Catholic lawmakers in question, said the bishops were confusing spirituality and politics. "Writing this open letter is a very political statement," said Ortiz. "It is not stewarding people's souls, it's being a politician. If they want to be politicians, they should run for office."

Some of the lawmakers say they will comply and stay away from the Communion rail, while others say the letter, signed by four Catholic bishops, including Denver Archbishop Samuel Aquila, will not deter them from receiving the sacrament.

The Reproductive Health Equity Act protects a person's right to continue a pregnancy, have an abortion and to use or refuse contraception without interference from state and local public entities. "A fertilized egg, embryo, or fetus does not have independent or derivative rights under the laws of this state," the act says. It does not place limits on when a person may choose to get an abortion.

Rep. Monica Duran, who is Catholic, said she supported the legislation because lack of access to abortion care disproportionately impacts vulnerable communities and people of color. She rejected the bishops' letter, saying "it sends the wrong message" to practicing Catholics.

"When you say 'Because you supported this piece of legislation you should not be able to partake in something so personal and private between you and your God,' I take issue with that," said Duran. She added, "Jesus brought everybody to the table."

State Sen. Sonya Jaquez Lewis, who was raised Catholic but no longer considers herself a member of the church, told Religion News Service she was shocked to hear of the bishops' letter, especially in light of the Vatican's instruction to U.S. bishops to tread carefully when they considered withholding Communion from President Joe Biden over his support for abortion rights last fall.

Pope Francis told reporters at the time that "every time the bishops have not managed a problem as pastors, they have taken a political stance on a political problem."

State Sen. Julie Gonzales, the co-sponsor of RHEA as well as a bill that abolished the death penalty in Colorado, noted that Catholic legislators who opposed the death penalty bill were not asked to opt out of Communion, despite the church's condemnation of capital punishment.

In an email to RNS, Brittany Vessely, executive director of the Colorado Catholic Conference, said the bishops' prioritization of abortion is not inconsistent because abortion "violates a fundamental moral teaching of the Church in its complete desecration of life and the millions of children who are killed annually."

She pointed to the description of abortion in documents issued by the Second Vatican Council as a "supreme dishonor to the Creator" and to the U.S. Catholic bishops' 2019 statement that abortion is their "preeminent priority."

Vessely added that the bishops' letter is not transgressing the boundaries between church and state because "the Catholic Church believes that there should be coherence between a person's beliefs and their actions," and that coherence is protected in the Constitution. Nor does the bishops' request misuse the Eucharist for political ends, Vessely said, because their letter was pastoral in nature.

"The bishops are therefore not threatening Catholic lawmakers, instead they are observing that they are likely not in communion with Catholic belief about life. And because they care about their souls and those who might be misled, they are warning them that they are doing damage," Vessely wrote.

Jamie Manson, president of Catholics for Choice, called the claim that a vote for abortion legislation could constitute mortal sin "pretty extreme," pointing out that voting for abortion rights legislation is only indirectly linked to abortion.

Gonzales said her stand on abortion takes into account the views of her constituents, Catholics and non-Catholics.

"The vast majority of Colorado Catholics access contraceptives and are pro-choice. So I see the legislation that I was proud to be the sponsor of as in line with what Colorado Catholics are asking for, and I feel that bishops are out of line with their parishioners on this one," said Gonzales.

According to March 2022 polling data from the Public Religion Research Institute, 59% of white Catholics and 57% of Hispanic Catholics in the U.S. believe that abortion should be legal in all or most cases.

"We have an all-male, all-celibate, supposedly, clergy. And so they don't have inroads into ordinary life," said Manson. "Catholic leaders have to start listening to their people. They have to start believing in the wisdom of the laity."

Vessely said the bishops remain open to conversation with Catholic politicians who voted for RHEA. Their letter asks lawmakers to refrain from Communion "(u)ntil public repentance takes place and sacramental absolution is received in Confession."

Gonzales and Jaquez Lewis, who were raised in a Catholic context but are not practicing Catholics, both received the letter from the bishops last Monday. The two say that while they occasionally attend Mass, they already didn't take Communion because they are not members of the Catholic Church.

"I've never taken Communion, and certainly after this incident, I don't plan to begin," said Gonzales.

Duran said that she does plan to continue receiving the sacrament. She told RNS that she was married for 38 years, and for 35 of those years she and her husband were not able to take Communion because they'd been previously married. Eventually, they decided to jump through a number of hoops to access the sacrament again in 2019.

"I just lost my husband in January, and I'm being told by bishops that if we supported this bill that gave women the right to choose and decide what to do with their bodies, I am being asked not to take Holy Communion," said Duran. "Trying to guilt me into not receiving the sacrament because I did my job and I supported this bill — and I still do today and would support it tomorrow — is not right."

Ortiz said he personally will refrain from Communion because that is what the bishops are asking, though he added that he is not saying other Catholics should do the same.

"If they think that this will get me closer to God, we will see. I will obey at request, and we will see if you are truly bringing the grace, love and compassion of God to me through that act."