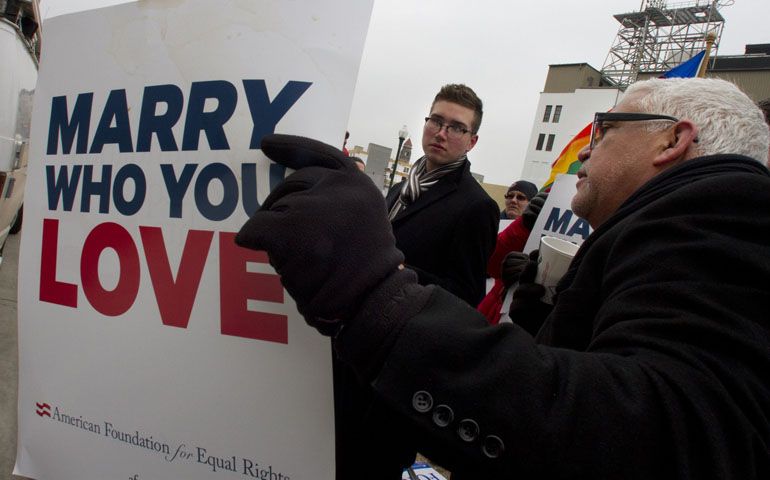 Spencer Geiger, left, and Roger Roman, both of Virginia Beach, Va., demonstrate on Feb. 4 in support of marriage equality as Norfolk Federal Court holds a hearing on the constitutionality of Virginia's ban on same-sex marriage. (Newscom/MCT/Adrin Snider)

When the U.S. Supreme Court in June altered the federal marriage definition to between two persons, it did not touch on the constitutionality of state bans against same-sex marriage. Rather, its decision opened the doors to a new wave of litigation and lower court rulings likely to bring the issue of marriage equality back to the nation's highest court.

Since the Supreme Court rulings -- on the Defense of Marriage Act (DOMA) and California's Proposition 8 -- four states have legalized same-sex marriage. In November, governors in Hawaii and Illinois signed legislation. Outside those two states, all the action has happened in the courtrooms. In October, New Jersey Gov. Chris Christie dropped an appeal to a state judge's decision that same-sex couples could marry. In December, New Mexico's Supreme Court unanimously approved of such unions in a state that previously had no laws permitting or banning them. Currently, 17 states and Washington, D.C., permit same-sex marriage.

In three other states, decisions are pending. The most prominent case is in Utah, where a federal judge ruled the state's ban was unconstitutional and that its current laws "demean the dignity of these same-sex couples for no rational reason." While more than 1,000 couples married after the Dec. 20 decision, their legal status remains in limbo after the U.S. Supreme Court stayed the decision as it awaits a review from a federal appeals court, expected in April.

That review will also impact Oklahoma, where a federal judge in mid-January placed a stay on his own ruling -- that the state's ban violated the 14th Amendment's equal protection clause -- until the appeals court ruled on Utah. And in Virginia, the attorney general decided Jan. 23 not to defend the state's marriage definition, which he called unconstitutional, and sided with the plaintiffs. Elsewhere, four same-sex couples sued Wisconsin Gov. Scott Walker Feb. 3 over the state's statute prohibiting out-of-state same-sex marriages for residents. Multiple media reports count as many as 47 lawsuits pending in 24 states.

The run on same-sex marriage rulings has direct ties to the dual Supreme Court decisions, specifically the United States v. Windsor case that altered DOMA's marriage definition, said John Green, a political science professor at the University of Akron, in Ohio, who studies the relationship of religion to politics. The biggest reason for the recent wave of cases, he told NCR, is that the DOMA decision -- even with its limited ruling and avoidance of the constitutionality question -- "left the door open" for lower courts to take on the issue.

In both the Oklahoma and Utah decisions, the judges drew their conclusions heavily from the DOMA decision. Wrote U.S. district judge Terence Kern in the Oklahoma case, "The 'state rights' portion of the Windsor decision stands for the unremarkable proposition that a state has broad authority to regulate marriage, so long as it does not violate its citizens' federal constitutional rights."

The recent string of DOMA-based rulings has accelerated the already rapid pace of marriage equality laws. As recently as 2007, only Massachusetts labeled same-sex unions as marriages. Before June's Supreme Court judgments, six states legalized same-sex marriage in a seven-month span. In those cases, evolving public opinion toward marriage equality and advocate campaigns factored heavily; for the court rulings, connecting the dots leads back to DOMA.

"The lower courts take their cues from the Supreme Court," Green said, "and when the Supreme Court breaks new ground on law, then that in turn affects how the district court judges resolve the cases in that area."

That such a windfall follows a Supreme Court decision is not unusual, he added, pointing to the 1963 Gideon case that required courts to appoint legal counsel to criminal defendants unable to afford proper representation. But that ruling only required judges to adopt the new standard, whereas the DOMA decision affects a much broader scope of laws.

While growing public opinion favoring same-sex marriage has played a part in ballot measures, legislative action, and to a degree, the court decisions, some courts have instead viewed the laws in question in terms of individual rights. In red states Utah and Oklahoma, the latter approach led to federal judges overturning bans, determining that state laws could not impede an individual's constitutional rights. Should cases arise in the other 27 states with constitutional bans, judges will have to determine what gains credence.

"So the question becomes, does the issue of marriage that is passed at a state level need to be protected because the voters of that state have made a decision, or is this an issue of individual rights where it's not appropriate for the voters to decide?" Green said.

In Utah and elsewhere, Catholic bishops hope the former takes precedence, as does the Mormon church, which has its faith in the judicial process upholding the 2004 voter-approved ban.

"We continue to believe that voters in Utah did the right thing by providing clear direction in the state constitution that marriage should be between a man and a woman, and we are hopeful that this view will be validated by a higher court," the Church of Jesus Christ of Latter-day Saints said in a statement.

Addressing the recent marriage court cases, San Francisco Archbishop Salvatore Cordileone, chair of the U.S. Conference of Catholic Bishops' Subcommittee for the Promotion and Defense of Marriage, said the DOMA ruling "made clear that the federal government is to respect a state's definition of marriage."

"In particular, the Court said that the federal government is to defer to 'state sovereign choices about who may be married' and furthermore criticized federal actions ... that 'put a thumb on the scales and influence a state's decision as to how to shape its own marriage laws.' "

Virginia's two Catholic bishops have urged Attorney General Mark Herring to defend the state's marriage definition amendment, "to defend the state laws he agrees with, as well as those state laws with which he personally disagrees." Their policy arm, the Virginia Catholic Conference, has called on Catholics to write Herring to ask him to defend traditional marriage or appoint outside counsel. A federal judge began hearing arguments Feb. 4.

That the same-sex marriage issue has come to the commonwealth is no surprise, said Jeff Caruso, executive director of the conference, who regarded it as part of a national strategy by marriage equality advocates.

"We certainly expected to see [it] in Virginia and indeed, we are seeing it and we're going to fight this as hard as we possibly can," he told NCR.

While lawsuits proceed in federal court, Caruso noted that recent legislative efforts to repeal the state's constitutional ban have not garnered enough support, a possible signal that a majority of Virginians stand by the 2006 voter-approved amendment.

"It had the support of 57 percent of those who voted, and I believe that there is still a very strong support for it here in the commonwealth today," he said.

However the rulings in Virginia and other parts of the country play out, Caruso is among the many that see it as inevitable that the issue returns to the highest judicial chambers.

"It's virtually certain that the Supreme Court will have to rule on the legality of same-sex marriage again," Green said. "And a lot of these cases that we're talking about may be the vehicle by which they do that."

Methodists brought to verge of fracture: Did the Holy Spirit do this?