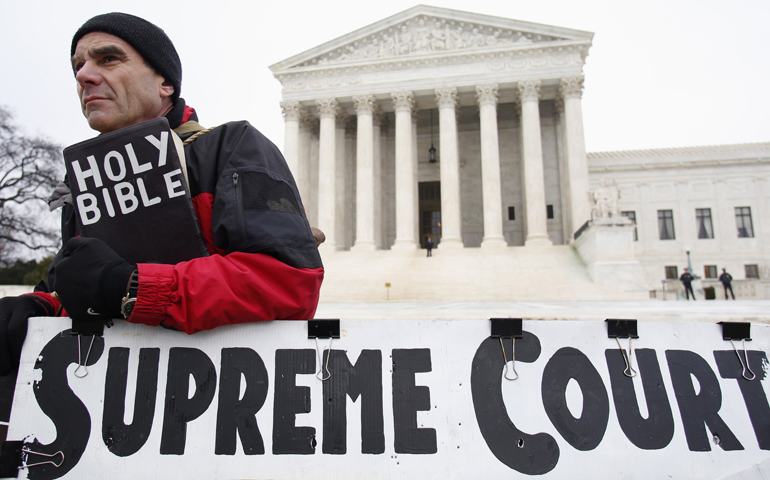 Alan Hoyle rallies in front of the U.S. Supreme Court on Wednesday in Washington. (CNS/Reuters/Yuri Gripas)

Supreme Court justices on Wednesday pressed attorneys about when it is constitutional to prohibit certain kinds of speech in a case over buffer zones around abortion clinics.

In oral arguments in a case over a 35-foot buffer zone around Massachusetts Planned Parenthood clinics, the attorney for people who want to approach clinic patients for "sidewalk counseling" to discourage them from having abortions argued that the state law "runs into a big First Amendment problem of even eliminating peaceful, consensual conversation that doesn't disrupt anything."

Mark Rienzi, attorney for the people who sued the state, told the court that the idea of the government picking one topic, in this case abortion, "and saying, well, around this, suddenly the character of the public forum changes from a place where people can have peaceful, consensual conversations to a place where we will imprison them for doing that, I think that's a dramatic restriction of First Amendment rights."

Several justices questioned attorneys on both sides about how a law could be structured narrowly enough to prevent aggressive conduct at clinics that was targeted by the Massachusetts statute, without stepping too far into First Amendment rights.

Attorneys conceded that no other states have laws creating such large restricted zones at abortion clinics.

The case, McCullen v. Coakley, was brought by several people who volunteer as "sidewalk counselors" outside Planned Parenthood clinics in Boston, Springfield and Worcester, Mass. Under a 2007 state law, there are yellow semicircular lines painted 35 feet from the entrances to the clinics, delineating how far away the sidewalk counselors and abortion protesters must stay.

The law prohibits conversations about abortion within the zone by anyone except employees of the abortion clinics.

In arguing that the 35-foot zone and its restrictions are necessary, Jennifer Grace Miller, Massachusetts assistant attorney general, disagreed with Justice Antonin Scalia's assertion that "this is not a protest case. These people don't want to protest abortion. They want to talk to the women who are about to get abortions and try to talk them out of it."

Scalia said "if it was a protest, keeping them back 35 feet might not be so bad. They can scream and yell and hold signs from 35 feet. But what they can't do is try to talk the woman out of the abortion. It's a counseling case, not a protest case."

Miller said "it's a congestion case," adding that people can have the conversations with clinic patients, "it's just that those conversations are moved back a few feet." She said the 35-foot zone was necessary to prevent people from impeding the entrances to clinics. A federal law that prohibits blocking clinic entrances is not applicable, she said, because it only applies to activities such as sit-down protests and people chaining themselves to doorways, not to the act of trying to converse with patients.

The last time the court considered the constitutionality of buffer zones around abortion clinics in 2000, it upheld Colorado's law prohibiting abortion protests or sidewalk counseling within 8 feet of people approaching any medical facility. The court ruled 6-3 that the law was not a regulation of speech but "a regulation of the places where some speech may occur."

Eleanor McCullen, a parishioner of St. Ignatius Parish at Boston College, is the lead plaintiff among those who sued, saying the law limits their ability to exercise their rights under the First and 14th Amendments to free speech and equal protection under the law.

Last summer after the court agreed to take the case, several people who do sidewalk counseling told The Catholic Free Press, newspaper of the Worcester diocese, that they hoped for a ruling in their favor so they could be more low-key in their approaches to people.

Nancy Clark, a parishioner of Our Lady of the Angels Parish in Worcester, told the newspaper that with a change in the law, "I wouldn't have to yell." When yelling to get clinic clients' attention from a distance, "you look like a fanatic" and "they may not hear what we are saying," she said.

Sidewalk counselor Mark Bashour of Our Lady of Perpetual Help, the Melkite Catholic parish in Worcester, said even those not against abortion should see that the law is unconstitutional and dangerous.

"What happens when the government doesn't like what you're doing with your freedom of speech?" he said. "What are they going to do next if this is found constitutional?"

"This is a First Amendment right," McCullen told the Free Press. "My feeling is, I should be able to speak to whomever I want, wherever I want. I shouldn't be curtailed by this line, because I lose people. I'm not harassing. ... I'm just a grandmother trying to offer help."

Other plaintiffs in the suit include Fr. Eric Cadin, a priest who does sidewalk counseling or praying outside the Boston Planned Parenthood location.

A ruling in the case is expected before the court adjourns for the summer in late June.