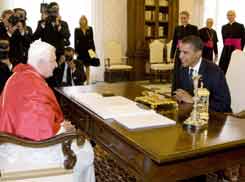 Several other veteran Vatican and White House watchers interviewed by NCR had similar positive impressions of Obama's first meeting with the head of the Catholic church.

It was a 35-minute private discussion in Vatican City -- sandwiched, for Obama, between a Group of Eight leading industrial nations meeting in L'Aquila, Italy, and a presidential trip to Ghana to promote better U.S.-African relations.

Obama's recent troubles with some segments of the U.S. Catholic hierarchy -- highlighted by the very public criticisms of about 70 bishops when Notre Dame University invited Obama to give a commencement address and granted him an honorary degree in May -- set a media framework for potential controversy over the July 10 session at the Vatican: How would the U.S. president and the world's Catholic spiritual leader deal with Obama's highly public and seemingly intractable conflict with at least a substantial minority of the nation's Catholic bishops on abortion and related life issues?

The answer, to Cusimano Love and others interviewed, was that Benedict clearly eschewed condemnations and chose instead to engage in constructive dialogue.

Obama, for his part, also apparently chose a dialogue path. On abortion, according to the Vatican press spokesman, Jesuit Fr. Federico Lombardi, he reiterated to Benedict his commitment to reduce the number of abortions in America.

That language, noted Georgetown University theology professor Vincent Miller, matched Obama's Notre Dame speech, clearly rejecting the preferred language of advocates of legalized abortion, such as Catholics for Choice, who do not want to speak of reducing abortion numbers but only of reducing the need for abortion -- in other words, of contraceptive or other programs to avoid unwanted pregnancies, with no legal or other restrictions on abortion for pregnant women.

Miller said he thought the president's reference to reducing abortion numbers reflected "a growing awareness by the Obama administration" of the Catholic concerns over abortion, even at a potential cost to his political base.

Noting the range of other issues the pope and president discussed, Miller highlighted the importance of education in tolerance, a point noted in the Vatican news release on the meeting but largely ignored in media coverage of the event. "This is something Pope Benedict has expressed great concern about," he said.

Fr. J. Bryan Hehir, executive director of Catholic Charities in the Boston archdiocese and professor of religion and society at Harvard University, said in a telephone interview that he was "not surprised" at Benedict's emphasis on human life issues in his discussions with Obama.

While the Vatican has not responded as sharply as some U.S. bishops to Obama's abortion policies, Hehir said that "when you get some difference of both emphasis and view, both the Vatican and the bishops will try to close that gap as far as they can. I think the value of the papal reception is that the Holy See thinks that what the United States does in the world makes a difference in everything from genetics to international finance. And therefore it is a fact of life that the Vatican needs and wants to deal with that, and to deal with the United States on productive terms."

He said he was not surprised that the meeting was described as cordial, although some papal meetings with former President George W. Bush during the Iraq war -- strongly opposed by Benedict and his predecessor, Pope John Paul II -- may have been less so. "I think the Vatican relations with states can be tough analytically, but they're cordial in style as a matter of course," he said.

From the Vatican's press release and other reports on the meeting, Hehir said, both the differences between the Vatican views and U.S. policy and the common ground they shared "were made clear and talked about, and on that basis there will be further discussion and collaboration."

The pope gave Obama both a copy of his new encyclical, Caritas in Veritate, which speaks about social justice and the world economic order, and a copy of the Vatican doctrinal congregation's recent declaration Dignitas Personae, which addresses bioethical issues including abortion and embryonic stem cell research.

Hehir said the pope's decision to give Obama that second document as well as his new social encyclical made sense. "On the range of issues that touch on biomedical affairs, the frontier for that kind of debate -- whether you think about it scientifically and technologically or whether you think about it in moral and political terms -- takes place here in the United States," he said.

"It looks like they talked seriously about life issues, about a good number of foreign policy issues and about Obama's common ground agenda," said Stephen Schneck, a professor of politics at the Catholic University of America and director of its Life Cycle Institute.

"It could be a surprise to some in the Catholic community, but I fully expected it to be a very friendly, cordial, but also businesslike meeting," he said. "In fact it was maybe a little bit more friendly than even I had expected," with the pope offering Obama a blessing on his work and Obama asking the pope to pray for him and his family.

"That's simply extraordinary, more than just professionalism, to have that sort of personal encounter," he said.

On the raising of abortion and other pro-life issues during the encounter, Schneck said, "If they were going to have a substantive meeting at all, this had to be raised."

He pointed out that the pope's new social encyclical is very supportive of international organizations and international law to regulate the economy and said in those areas the views of the Holy See and the Obama administration "have very much in common."

Jesuit Fr. Drew J. Christiansen, editor of America magazine, said, "Given the Vatican's greater openness and affirmation of the Obama administration [in comparison to the U.S. hierarchy], it was still quite clear in a cordial way that it wanted to talk to him about the pro-life issues. ... I knew that would be done, but it was a considerable part of the conversation and it was embodied in the gift of Dignitas Personae."

"The Vatican is showing that you can deal with this [abortion] issue but still deal with the administration," he added. "You can still dialogue with him."

Christiansen said the fact that the meeting lasted about 35 minutes -- more than double its allotted time -- coupled with the Vatican press spokesman's positive description of the session, "confirmed my notion that these are men who really do admire one another." Since last November, he said, it's been clear that the pope and other Vatican officials "really do see his election, the election of an African-American, as a landmark in world history."

"I think both sides are looking to have a constructive relationship," he said.

"I think the real key to making this relationship work is [the Vatican nuncio to the United States, Archbishop Pietro] Sambi. I think Sambi has cut through the veil of negative impressions held for years by certain members of the [U.S.] hierarchy about the ability of the Vatican to deal with a Democratic government," Christiansen said.

He said that at the bishops' Administrative Committee meeting this spring Sambi privately "upbraided them for being partisan in the way they were handling these political issues. He said they were being partisan and were dividing the hierarchy and had to stop."

Marie Dennis, director of the Maryknoll Office for Global Concerns in Washington and first lay co-president of Pax Christi International, said she was struck by the fact that the pope and Obama "seemed to be on the same page" on so many issues.

"I think that the continuation of a positive energy between the Obama administration and the Catholic church is very important," she said. "There is a lot of common ground, there is a lot of honesty about differences, and I think that's a healthy way to move into a relationship."

In Obama's meeting with Benedict she saw a dialogue "about a wide range of very critical issues, all of which have to do with life. ... I think that's a very positive thing."

Jesuit Fr. Thomas Reese, a political scientist and senior fellow at Woodstock Theological Center in Washington, said the pope showed U.S. bishops who have problems dealing with the Obama administration that "it is possible to walk and chew gum at the same time. It's possible to be pro-life and also be pro-social justice."

"All the stories about how the pope was going to lecture him and shake his finger at him didn't happen," he said. "You don't write somebody off because you have disagreements."

Cusimano Love said that some on the left considered a presidential meeting with the pope an improper violation of "the separation of church and state," while some on the right objected because "they favor shunning and condemnation of leaders who believe abortion should remain legal."

"The pope and president instead offer a different model," she said. "In world of urgent problems, we must pursue dialogue and creative engagement."