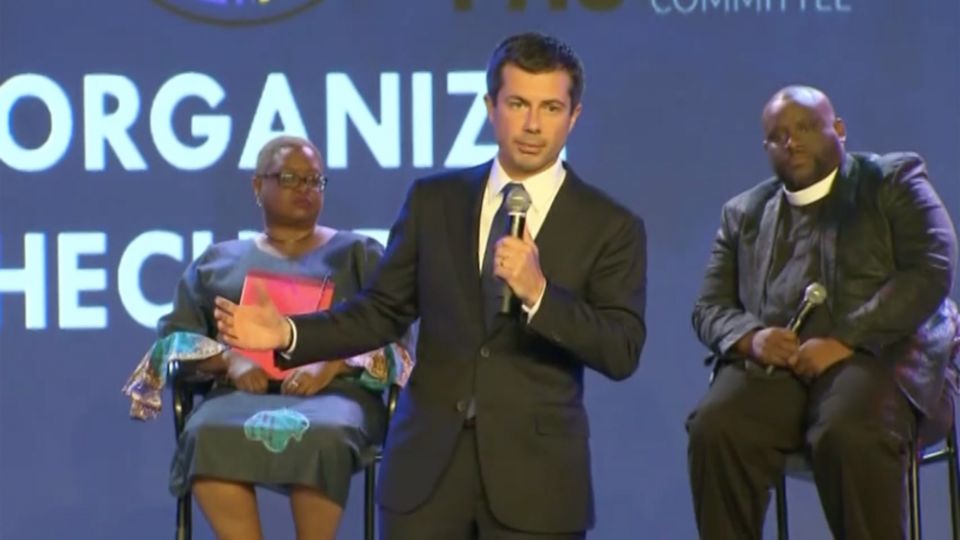 Three Democratic presidential hopefuls fielded questions from black church leaders on Aug. 16, bouncing between politics and prayer as they vied for support from an audience of about 5,000 black millennials.

The candidates were peppered with questions on topics that ranged from police shootings to student loan debt to what activist pastor Rev. Michael McBride, one of the forum’s moderators, described as the "moral conversation in this country."

First to address the crowd at the Georgia International Convention Center was Castro, who has mentioned his Catholic faith at various times since his campaign announcement. After his opening remarks, the Rev. Leah Daughtry of The House of the Lord Church in Washington, D.C., asked Castro why black people of faith should trust him with their vote.

Castro, the former mayor of San Antonio, Texas, responded by noting that, among other things, he would call for police reform that would include a national standard for the use of force. Police departments that refuse to abide by it could be denied federal funds.

He also called for greater investment in community groups, including faith-based nonprofits, which, he said, could help "mend the rifts" between police and communities.

After the crowd erupted in applause, Castro detailed how he would also provide "tools" for federal law enforcement agencies to combat white nationalism and hold social media platforms accountable.

Castro was followed by Buttigieg, who has spoken often about faith but struggled to garner support among black voters — religious or otherwise. He opened with a direct appeal to faith, insisting that "God does not belong to a political party in this country."

Buttigieg, an Episcopalian, observed that "political leaders ought to … speak for voters of any religion and no religion equally," and called the coming elections an opportunity to "remind voters of faith that we have a choice."

Having referred to Christian scripture in his remarks to explain his approach to poverty, hunger and incarceration issues, Buttigieg, a small city mayor himself, was asked directly how he would alleviate poverty in practical terms.

Buttigieg answered that he would work to raise the minimum wage and push for increased unionization, adding that faith communities also have a role to play. He alluded to the work of the Rev. William Barber, co-chair of the Poor People’s Campaign, whose June protest outside the White House Buttigieg attended, sitting quietly as he watched a spectrum of faith leaders discuss poverty.

"We’ve got to be honest about the fact that (poverty) is a moral issue," he said. "This is one of many reasons why I think people of faith can take the lead, (like) when you look at things like what Rev. Barber is doing with the Poor People’s Campaign."

Booker, who opened his remarks by noting that his "whole lineage comes from the black church," received the most passionate reception of the three candidates. A Baptist who has spoken at numerous faith gatherings as a politician, Booker’s often fiery presentation blurred the line between a speech and a sermon.

After describing the current political moment as a "moral crisis," he recalled how he leaned on support of local clergy to address issues while serving as mayor of Newark, New Jersey.

Booker then quoted from the Apostle Paul’s Letter to the Philippians, "I can do all things through Christ who strengthens me," arguing that the passage calls for action and not for people to "sit on the sidelines" and be complacent.

"I want to call the faith community together, because faith without works is …" said Booker, who then held out the microphone for the crowd to finish the line from the Letter of James.

"Dead!" the crowd, already on its feet, shouted back.

Booker called on African American voters to claim their own electoral destiny.

"We do not need one president who comes in and says ‘I’m the savior’ — I’ve got my savior, y’all," he said. "And I’m telling you right now, we have to bring about our salvation."

McBride, in a telephone interview before the forum began, said that one of the main goals of the gathering was to induce the candidates to focus on faith as a potential blindspot of the Democratic Party.

"Unfortunately, too many Democrats are afraid of faith, and they’re afraid of race," McBride said. "That’s why the black church must step up."

McBride said that regular dialogue with black religious voters is not only a sound strategy for politicians hoping to win the Democratic primary but also a long-term investment in winning the general election.

"These potential voters will also be the engine to drive turnout," McBride said. "If the candidates cannot electrify and motivate these young people over the next six months to a year to turn out their friends and their families and their neighbors to vote, then we may not have the most voters showing up at the polls to be able to defeat — from the White House all the way to a local election — an agenda that is about excluding and punishing the poor and the dispossessed."