Does Trump's presidency signal the end of the 'American Century'? 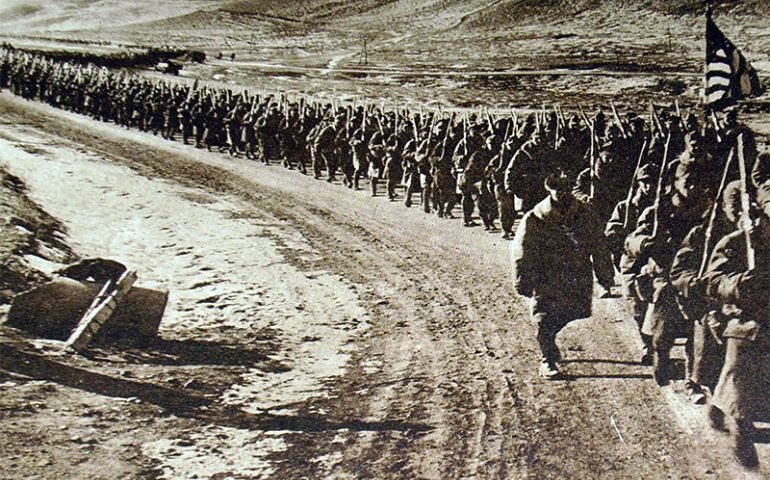 American troops walking along a road during World War I. (Creative Commons)

In 2012, President Barack Obama declared the United States would always be "the one indispensable nation in world affairs."

"No other nation seeks the role that we play in global affairs," he added. "That includes shaping the global institutions of the 20th century to meet the challenges of the 21st."

But only five years later, many people wonder whether that remarkable era of world leadership is now coming to an end. Donald Trump has publicly spoken of abandoning America’s longtime commitments in many regions of the world. Just this week, reports indicate President Trump plans to slash the number of refugees who can resettle in the U.S. and block Syrians and others from entering.

But when exactly did the "American Century" begin and what role did religion play in its creation?

To bolster his call to arms, Wilson, a progressive Democrat who still remained a staunch supporter of racial segregation, employed both idealistic political phrases and uplifting religious rhetoric that stood in stark contrast as Wilson listed Germany’s hostile military and political actions directed against the U.S.

Wilson’s combination of religion and realpolitik persuaded the Senate and the House of Representatives to go to war.

The concluding sentence in his congressional address, invoking God, is the quintessential religio-political essence of the American Century: "To such a task we can dedicate our lives and our fortunes, everything that we are and everything that we have, with the pride of those who know that the day has come when America is privileged to spend her blood and her might for the principles that gave her birth and happiness and the peace which she has treasured. God helping her, she can do no other."

In a letter to a friend, Wilson made clear his profound religious commitments: "My life would not be worth living if it were not for the driving power of religion, for faith, pure and simple. … never for a moment have I had one doubt about my religious beliefs."

During the 18 months between Wilson’s speech and the armistice that ended World War I, more than 1.5 million Americans were thrown into the conflict with Germany. Historians agree the large number of fresh American troops greatly hastened the Allied victory.

Beginning in 1917, the U.S. emerged as a global superpower, later earning the titles of "the arsenal of democracy" and the "world’s policeman," along with other similar descriptions — all reflecting America’s major role on the world stage during the past 100 years.

Wilson’s 1917 speech is the seedbed from which "American exceptionalism" and "indispensability" sprang. A century ago, the 28th president went to war to "make the world safe for democracy." He also sought the creation of an international "League of Nations" to ensure a peaceful world.

Many years later, George W. Bush, a Republican, echoed Wilson in his second inaugural address: "We are led, by events and common sense, to one conclusion: The survival of liberty in our land increasingly depends on the success of liberty in other lands. The best hope for peace in our world is the expansion of freedom in all the world. … So it is the policy of the United States to seek and support the growth of democratic movements and institutions in every nation and culture, with the ultimate goal of ending tyranny in our world."

Wilson could not have said it better.

But an inflexible Wilson never achieved his goal of American participation in the League of Nations organization (a forerunner to the United Nations). In his religiously driven zeal to secure the Senate’s approval for his proposed international organization, the president undertook a rigorous postwar 29-city tour to build public support for the League.

Unwilling to compromise, and driven by what his friends and foes both termed a personal messianic fervor, Wilson’s body and mind cracked under the strain. He suffered a debilitating stroke on Oct. 2, 1919, in Pueblo, Colo. The president never regained the physical or intellectual strength required to lead the nation. Wilson died a broken man at age 67 in 1924.

But he will be acknowledged forever as the political architect and the religious author of the American Century.

Commentary | Does Trump's presidency signal the end of the 'American Century'?

After a year of setbacks, uncertainty looms for immigrants in 2017