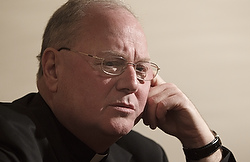 ROME -- Cardinal-designate Timothy M. Dolan of New York said Feb. 13 that President Barack Obama's proposed revision to the contraceptive mandate in the health reform law did nothing to change the U.S. bishops' opposition to what they regard as an unconstitutional infringement on religious liberty.

"We bishops are pastors, we're not politicians, and you can't compromise on principle," said Cardinal-designate Dolan, president of the U.S. Conference of Catholic Bishops. "And the goal posts haven't moved and I don't think there's a 50-yard line compromise here," he added.

"We're in the business of reconciliation, so it's not that we hold fast, that we're stubborn ideologues, no. But we don't see much sign of any compromise," he said.

"What (Obama) offered was next to nothing. There's no change, for instance, in these terribly restrictive mandates and this grossly restrictive definition of what constitutes a religious entity," he said. "The principle wasn't touched at all."

Obama's proposed revision of the Department of Health and Human Services' contraceptive mandate left intact the restrictive definition of a religious entity and would shift the costs of contraceptives from the policyholders to the insurers, thus failing to ensure that Catholic individuals and institutions would not have to pay for services that they consider immoral, Cardinal-designate Dolan said.

For one thing, the cardinal-designate said, many dioceses and Catholic institutions are self-insuring. Moreover, Catholics with policies in the compliant insurance companies would be subsidizing others' contraception coverage. He also objected that individual Catholic employers would not enjoy exemption under Obama's proposal.

"My brother-in-law, who's a committed Catholic, runs a butcher shop. Is he going to have to pay for services that he as a convinced Catholic considers to be morally objectionable?" he asked.

Cardinal-designate Dolan said he emailed Sister Carol Keehan, a Daughter of Charity who heads the Catholic Health Association, on Feb. 10 to tell her that he was "disappointed that she had acted unilaterally, not in concert with the bishops."

"She's in a bind," the cardinal-designate said of Sister Carol. "When she's talking to (HHS Secretary Kathleen) Sebelius and the president of the United States, in some ways, these are people who are signing the checks for a good chunk of stuff that goes on in Catholic hospitals. It's tough for her to stand firm. Understandably, she's trying to make sure that anything possible, any compromise possible, that would allow the magnificent work of Catholic health care to continue, she's probably going to be innately more open to than we would."

In a Feb. 10 statement, Sister Carol praised what she called "a resolution ... that protects the religious liberty and conscience rights of Catholic institutions."

Cardinal-designate Dolan said Obama called him the morning of his announcement to tell him about the proposal.

"What we're probably going to have to do now is be more vigorous than ever in judicial and legislative remedies, because apparently we're not getting much consolation from the executive branch of the government," he said.

The cardinal-designate said the bishops are "very, very enthusiastic" about the Respect for Rights of Conscience Act, introduced by Rep. Jeff Fortenberry, R-Neb., which he said would produce an "ironclad law simply saying that no administrative decrees of the federal government can ever violate the conscience of a religious believer individually or religious institutions."

"It's a shame, you'd think that's so clear in the Constitution that that wouldn't have to be legislatively guaranteed, but we now know that it's not," he added.

Cardinal-designate Dolan also said that some "very prominent attorneys," some of them non-Catholic and even nonreligious, had already volunteered to represent the bishops.

"We've got people who aren't Catholic, who may not even be religious, who have said, 'We want to help you on this one.' We've got very prominent attorneys who are very interested in religious freedom who say, 'Count on us to take these things as high as you can.' And we're going to."

He said the bishops draw hope for that fight from the Supreme Court's recent unanimous ruling in Hosanna-Tabor v. EEOC, a case regarding the ministerial exception.

"You'd think that (the Obama administration) would be able to read the tea leaves, that these things are going to be overthrown," the cardinal-designate said.

An administration official told Catholic News Service in an email Feb. 13 that the White House planned to convene a series of meetings "with faith-based organizations, insurers and other interested parties to develop policies that respect religious liberty and ensure access to preventive services for women enrolled in self-insured group health plans sponsored by religious organizations."