Drone attacks are a stain on the nation 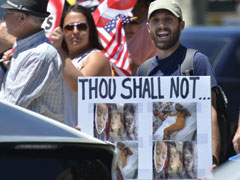 A man holds a poster showing photos of what he said were children killed in U.S. drone attacks during a demonstration in Fresno, Calif., June 24. (AP photo/The Fresno Bee/John Walker)

As president, Richard Nixon, a man with well-honed grudge-bearing skills, had an enemies list. Barack Obama has one, too. Unlike Nixon, who mostly brooded about people he saw as swine, with curses and vulgarities vented against them, Obama takes his list further. He kills his enemies -- by approving drone attacks operated by remote control in military bases around the country.

Whether for bombing or surveillance, the crewless robotic aircraft, with names such as Predators, Reapers, Global Hawks and Phantom Rays and manufactured by the cost-overrun specialists of military contracting -- Boeing, Lockheed Martin, Northrop Grumman, Raytheon -- have been routinely carrying out Obama's lethal wishes against suspected terrorists in Afghanistan, Iraq, Yemen, Pakistan and elsewhere. With enemies able to decamp anywhere globally, by Obama's thinking the whole world is a battlefield with his drones and Hellfire missiles justifiably lurking. The Nobel Peace Prize winner was in office only three days -- Jan. 23, 2009 -- when he oversaw a drone attack targeting a Taliban redoubt in Pakistan. It missed. Instead, five civilians were slaughtered in their home. Obama's hit men were having an off day.

Drone attacks have killed American citizens living abroad. In mid-July, the families of three victims assassinated last fall -- Samir Khan, American-born Anwar al-Awlaki, and al-Awlaki's 16-year-old son, Abdulrahman -- filed a lawsuit in U.S. District Court in the District of Columbia. The lawsuit was prepared by the American Civil Liberties Union and the Center for Constitutional Rights. None of the three were charged with a crime, much less given due process. Al-Awlaki, a cleric who moved to Yemen and who preached against American foreign policy and those who backed it, was killed while driving on a mountain road with Khan, an alleged al-Qaeda propagandist. Weeks later, the teenaged Abdulrahman, eating dinner with fiends, died in a missile attack. Al-Awlaki received a degree in civil engineering from Colorado State University in the 1990s. His father, Nasser al-Awlaki, and one of the suit's plaintiffs, earned a doctorate from the University of Nebraska.

Obama and his advisors in the Justice Department and White House Situation Room justify drone killings as necessary for national security. Attorney General Eric Holder Jr. said in March: "It may not always be feasible to capture a U.S. citizen terrorist who presents an imminent threat of a violent attack. In that case, our government has the clear authority to defend the United States with lethal force."

Among those not buying that specious argument for convenience killing is Medea Benjamin, the co-founder of Code Pink and Global Exchange, two of the nation's major peace groups. In the newly published Drone Warfare: Killing By Remote Control, Benjamin supplies the details on the history of the weapons and who designs, operates, legalizes, funds and champions them -- and who are the thousands of victims. Benjamin has traveled to the scenes of gore. In the final pages of her well-documented investigation, she writes: "Have you ever seen a drone victim on the news? Have you seen pictures of body parts hanging from trees, houses turned to rubble, mothers wailing in grief? The mainstream media, after cheerleading for war and enthusiastically covering the initial shock-and-awe volley of missiles, quickly became bored with America's imperial exploits. And with the rise of drone warfare, that poses no risk to Americans, they aren't about to spend time covering blown-up foreigners."

The exception is a big catch: when a drone takes out what the pliant media calls a "terrorist mastermind" or a "Bin Laden's top lieutenant" or a "Taliban chieftain." Such selective reporting leaves little room for questioning whether these murders are legal, moral or even remotely effective. "There have been wars with much greater casualty counts," Benjamin writes. "But no president has ever carried out so many secret, targeted killings. It's quite astounding that the Obama administration has killed thousands of suspected militants and civilians alike, including U.S. citizens, in undeclared, illegal wars, with nary a whisper of impeachment on Capitol Hill."

The abuse and overuse of presidential power is a stain on both Obama's record and on the self-duped throngs on the gullible left who, misty-eyed over the oratory of a former community organizer, voted him into power. Only when reparations are made to the drone victims, plus apologies, can the stain be removed. Somewhat.

Politics | Drone attacks are a stain on the nation

Trump: The view from Rome