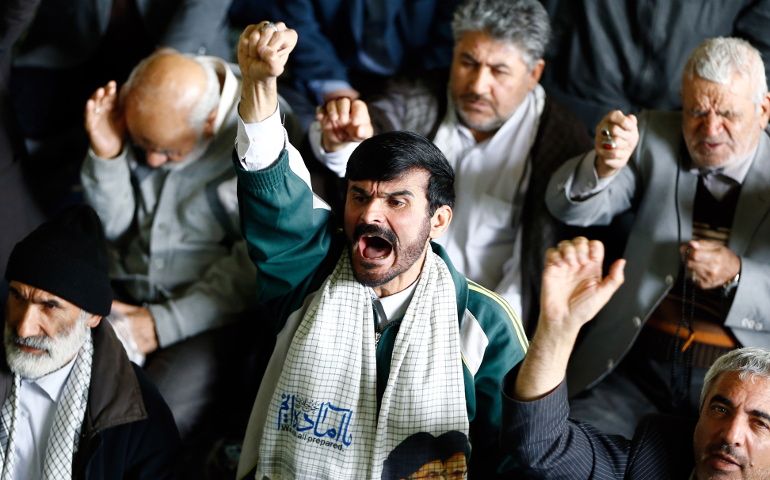 President Donald Trump received wide bipartisan support for ordering 59 cruise missiles to bomb an airfield in northwest Syria April 6. He was praised for taking decisive action and showing resolve in standing up to the evil regime of Syrian President Bashar Assad. We do not share that support, and we draw a very different lesson from the president’s action. It is clear to us that Trump is following his two predecessors down a path into a quagmire of endless war and despair.

Without a doubt, the use of chemical weapons is morally reprehensible. Yet citing that as a trigger event for action after six years of the cruel bloodletting of a civilian population by regular arms seems disingenuous. In March, on the sixth anniversary of the war in Syria, the Syrian Network for Human Rights reported that 207,000 civilians have been killed, including 24,000 children and 23,000 women.

The Syrian Network for Human Rights report says that aerial bombardment and shelling have caused the majority of deaths. Accounting for the remainder were various weapons including machine guns, snipers, mortars and cluster munitions.

So, yes, chemical weapons are unquestionably reprehensible, but so are the casualties of barrel bombs and sniper fire, malnutrition and lack of medical care. The madness must stop, but bombing a single airstrip in Syria with 59 cruise missiles won’t accomplish anything because it is not part of a larger strategy.

Trump used this airstrike like he uses Twitter: After witnessing something he didn’t like or that threatened him or his interests, he lashed out. He created an appearance of tough decisiveness, but in the end, it’s a hollow action.

What is needed is something the United States has not had for a very long time: a coherent plan of action for the Middle East. For more than a decade and a half, we have stumbled and fumbled from one battlefield to the next and then back again in Afghanistan, Iraq, Somalia and now Syria.

President George W. Bush raised his infamous “Mission Accomplished” banner in 2003 and President Barack Obama declared an end to the U.S. military mission in Iraq in 2010 and in Afghanistan in 2016. But the killing continues in all these places and we have nothing to show for the hundreds of thousands of lives lost and trillions of dollars in national treasure squandered. Today, the U.S. has about 9,000 troops in Afghanistan and about 6,500 troops in Iraq. We continue to spend billions of dollars annually to support them.

Since his inauguration, Trump has deployed additional troops to both countries and 400 troops directly into Syria with the promise of more to come. Two attempts to look tough — a Special Forces raid in Yemen and airstrikes in Mosul, Iraq — killed more civilians than combatants.

When will this end?

Congress has not debated any of these deployments, and the Trump administration has set forth no long-term policies for Afghanistan, Iraq, Syria or any other countries where U.S. troops are deployed. Under three presidents now, the Pentagon has relied on one piece of legislation for all this war-making: the Authorization for Use of Military Force Against Terrorists, or AUMF, which Congress approved in the wake of the Sept. 11, 2001, terrorist attacks on New York and Washington.

That resolution has defined our foreign policy and shaped our domestic policy for nearly 16 years. It gave the president the authority to “use all necessary and appropriate force against those nations, organizations, or persons he determines planned, authorized, committed, or aided the terrorist attacks that occurred on September 11, 2001.”

Those actors are largely all gone, but the resolution has no ending date, nor does it signal what action or event would trigger an end to the authority. Three administrations have used the AUMF to take troops, airplanes and drones into a dozen Middle Eastern and African nations. And there is no end in sight.

It is time for Congress to reclaim its constitutional authority over war-making. It must rescind the Authorization for Use of Military Force Against Terrorists of 2001 and demand that the president and the Pentagon come back to it for new authorization, a request that must contain a comprehensive plan of action to end U.S. involvement in these wars.

Placing a request for new military force authorization before Congress, we believe, would allow a national debate on the U.S. position in the global community. We would hope that the new plan would have a strong emphasis on diplomacy and incorporate a coalition of international players.

The plan in place for 16 years has accomplished nothing. Ending the AUMF is the first step in seeking an end to these wars.