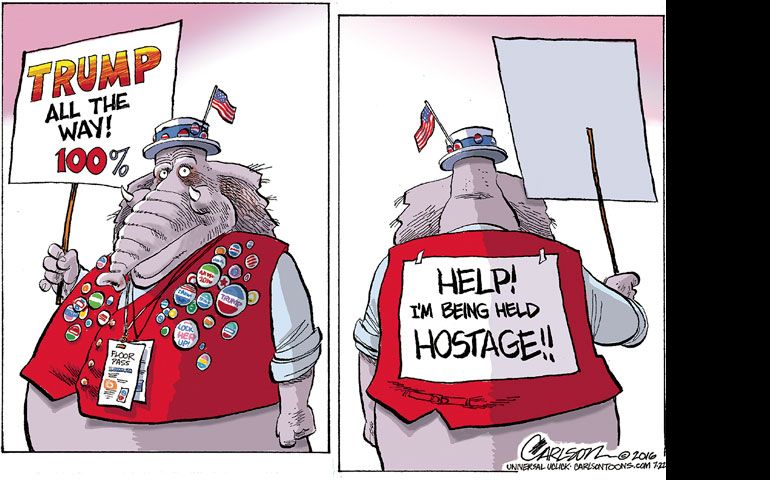 With fewer than three months remaining in this quite strange political season, the question is: Will we acquiesce to a new normal in which all previous boundaries of decency and propriety are obliterated, where ignorance of policy and disdain for statecraft is applauded and in which no attack on the opposition is deemed too coarse?

Donald Trump has tipped the balance from the outlandish to the unacceptable. He has pushed us all beyond the limits that we tried desperately to maintain in recent years as we conjured up equivalencies where they really don't exist in strained efforts at political fairness and rectitude.

It is dangerous to view any era of U.S. politics as unique. Our presidential history is seeded heavily with scoundrels, egomaniacs and incompetents as well as with men of great vision and noble purpose. And, more often than not, the virtues and vices entwined. Our politics has been forever partisan and often consisted of bitter differences.

The failed yearning to rise above such divides goes back to the founders. Jon Meacham, in his impressive biography, Thomas Jefferson: The Art of Power, concludes of the third president's unsuccessful efforts to bridge partisan divides: "The Founders' dream of a nation beyond partisanship was one that simply could not survive the very nature of a free politics in a culture of diverse interests."

But even the most bitter divides, even Nixonian-level challenges to constitutional authority, yielded to a shared sense of decency, of regard for the rule of law, of concern for the common good, and the understanding that moments occur in our national existence during which party loyalty and personal ambition become subservient to something larger.

Many of us may have anticipated that a correction in course would occur this time as well, but that never happened. Trump has offended women, Mexicans, Muslims, persons with disabilities, and the parents of a military officer who was killed in Iraq while shielding his soldiers. Trump has shown himself abysmally ignorant and disdainful of the most fundamental elements of governance, not to mention foreign policy. And he is the Republican candidate.

Adhering to the journalistic technique that has crept into favor in recent years, this is the point at which the "on the other hand" would require a recitation of Democratic candidate Hillary Clinton's catalog of faults. But that would be an extension of the false equivalencies that threaten to overwhelm our political discourse.

However flawed Clinton might be, and even considering her reckless use of a personal email server while secretary of state, the balance of her decades of public service would tip heavily in the direction of someone who has comported herself with dignity and seriousness, with a deep appreciation of what it means to govern in a pluralistic society.

That equivalency exists between the candidates is pretty much obviated by the growing chorus of major Republican voices expressing everything from mild displeasure to condemnation of Trump. The singular nature of his unfitness for the office of president was underscored by the fact that neither of the two living Republican presidents nor the two most recent party candidates for president chose to attend the GOP convention. The list of other notable party members who found reason not to attend was more significant than those who chose to show up. No one of note will join Trump on the campaign trail.

He has exhausted all reasonable goodwill and patience. Continuing to confer legitimacy on his candidacy robs the political process of the serious discussions -- and, yes, that includes critiques of the Clinton-Kaine ticket -- that should be occurring.

Alternatives exist to the two major tickets; Republicans can write in candidates in protest of what already seems a lost cause. It is impossible, however, to imagine witnessing this unraveling of Trump and his campaign over the next three months without a radical reaction from party leaders. They need to reclaim the dignity and purpose expected of a major political party before Trump lands the GOP in moral bankruptcy.

Perhaps Trump's convention declaration that he, alone, can fix things was a foreshadowing of what he understood, from personal experience, better than the rest of us: That in the end he would be left standing alone, isolated, a product of his own bombast and little more.

Trump has morphed from bizarre political curiosity to dangerous political candidate. No one is blameless in this aberration of American politics. The Democrats, who played their own game of "gotcha" through the years, had a hand in creating the extreme partisanship that is now blowing up the system through the rise and resilience of Trump.

It falls, however, to the leadership of the party that gave the country a Trump candidacy to repudiate him in clear and certain terms.

The many losers of winner-take-all-politics