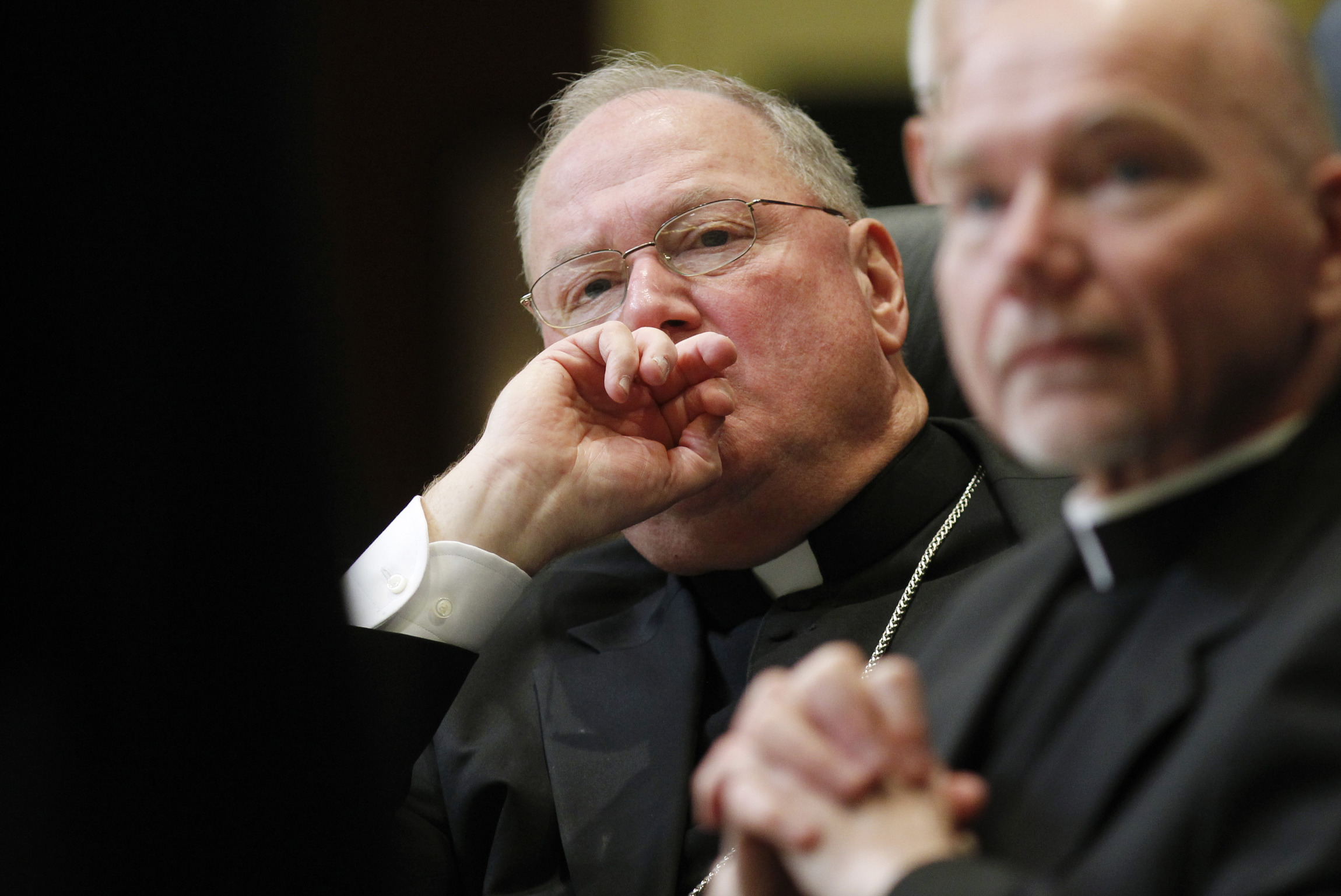 New York Cardinal Timothy M. Dolan listens to proceedings of the U.S. bishops' meeting in November in Baltimore. Cardinal Dolan, president of the U.S. Conference of Catholic Bishops, said in a Feb. 7 statement that the government's new set of proposed rules on insurance coverage of contraceptives falls short in meeting concerns of the church. (CNS photo/Nancy Phelan Wiechec)

By most reasonable measures, the dispute between the U.S. bishops and the Obama administration over the Department of Health and Human Services’ contraception mandate in the Affordable Care Act should have ended with the Feb. 1 announcement of an amended rule.

That it hasn’t says more about a deep division within the United States Conference of Catholic Bishops than it does about the administration’s willingness to move quite a distance in meeting the wishes of Catholic leaders.

The fundamental objection to the original rule was its use of a controversial, four-part definition of what constitutes a religious institution. The definition, a sharp departure from precedent, severely narrowed the meaning of religious institution in a way that set up an unnatural division between houses of worship and a church’s ministry.

As the point was adequately made earlier, and several times on these pages, Catholics don’t believe that the practice of faith ends at the front door of the church. The most legitimate expression of faith occurs in the wider community.

That four-part definition was rescinded in the revised rule and replaced by a definition that has been in place in the federal tax code for decades. In that vein, churches, their ministry arms and self-insured religious organizations are exempt from the mandate to provide universal, inexpensive contraception to employees.

Under the new rules, women who work at exempt (or accommodated, in the rule’s language) organizations can obtain contraceptive coverage from a plan administrator who will be reimbursed via the exchanges being set up by the Affordable Care Act.

Cardinal Timothy Dolan, president of the USCCB, has argued in a response to the new rules that such a provision still means that all employees, even of church ministries, will ultimately have access to contraceptives. That is a bit like arguing that all drug stores should close because the Catholic church objects to contraceptives.

The church, in various forums, has urged that this not be viewed as a debate over contraception but as a debate over religious freedom, that the church should not be coerced to do what it sees as contrary to its teaching.

But Dolan raises that very prospect by arguing that “private individuals” would receive “no conscience protection at all.” The reality is that any Catholic employer in the private sector, for instance, who objects to artificial contraception but yet insures employees through private companies is, in the grand scheme of things, betraying his conscience. Regardless of the coverage one chooses, premiums paid to a private insurance pool ultimately fund all manner of coverage, including contraception and abortion.

The bottom line: With the new rules, the church, its ministries included, does not have to negotiate with companies providing contraception coverage nor does it have to provide the coverage. Some of its employees may well opt to take such coverage. But that is merely reflective of another reality: The only constituency remaining within the church that might — might — muster a majority in favor of the church’s teaching on artificial birth control is the bishops.

The administration, which won the last election and along with it the Catholic vote, owed little, politically, to the bishops. The Catholic hierarchy was one of the major blocs publically opposing Obama’s signature legislation, the Affordable Care Act. Among them were members who voiced crude and outlandish personal attacks on the president during the campaign.

In short, the bishops received a gift. The alternative to accepting it with some grace is extended litigation on matters that need not be litigated with money that would serve more compelling needs elsewhere.

The fact that so much media attention is now spent on parsing the reactions of different factions of the conference shows the locus of the real story. What precisely did Dolan mean by his response? Were the rather intemperate remarks of Archbishop Charles Chaput of Philadelphia a direct challenge to Dolan? Can the most extreme and vociferous of the hierarchy be controlled? Can the conference reach some kind of consensus on this?

What the conference is revealing is the tug from at least two directions that will become increasingly telling in the weeks and months ahead.

On one side are, for lack of a better term, the traditionalist bishops in the sense of those who see the conference as a prudent, mediating force in the culture, grounded in the teaching of the church yet keenly aware that the political arena in the United States is not a Catholic cathedral, it is a place where we Americans learn to accommodate each others’ differences.

On the other side are those whose language turns apocalyptically purple at the slightest agitation, the partisans who speak only in absolutes and whose worldview requires enemies in every corner. Such intransigence only provides a greater rationale for those who wish to marginalize the church. They can’t accept a near-total victory on this matter of the HHS mandate because it would signal the end of a fight they relish.

Worse than being transparently ungracious and nakedly partisan, the culture warrior bishops compromise the church’s opportunities to weigh in on the important matters of gun control and immigration reform coming up quickly. If they were to get things to go their way half as much on those issues as they have on the HHS mandate, we could all feel much better for the prevailing winds in the culture.