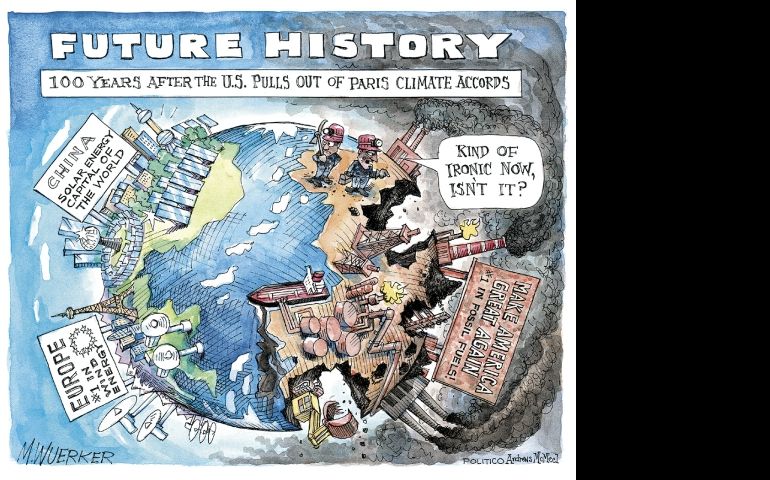 The Trump administration seems determined to remove the United States from any leadership position in the world. Accounts of Donald Trump's first foreign trip abroad as president read like a playbook on how to engineer a diminished role in world affairs, and, once home, his decision to pull the United States out of the Paris Agreement on climate change shows that he is willing to implement that narrow vision.

Not only is Trump ready to abdicate a leadership role in the international community, he wants no part in it. This attitude was no more on display than in his decision to pull out of the Paris climate accord. This could be the most fateful decision the president ever makes. He could very well be endangering the future of the planet.

NCR's editorial stance on climate change should be well-known to our readers. In 2014, we called it the No. 1 pro-life issue of our times. We agree wholeheartedly with the Catholic leaders who called the decision to withdraw "a terrible — and we hope reversible — mistake." We would underscore Bishop Oscar Cantú's statement: "Catholic teaching insists that climate change is a grave moral issue that threatens our commitments: to protect human life, health, dignity, and security … to live in solidarity with future generations; to realize peace; and to care for God's good gift of creation." NCR profoundly disagrees with any move that undermines efforts to reduce greenhouse gases and inhibit global warming.

Beyond the moral issues, other editorial writers have explained why rejecting the Paris Agreement makes no economic sense. The New York Times, for example, noted that "Trump clings to the same false narrative that … environmental regulations are job killers, that efforts to curb carbon dioxide emissions will hurt the economy. … As alternative realities and fake facts go, that argument is something to behold." The Times cites extensive research that shows "that reducing carbon emissions can in fact drive economic growth." Gina McCarthy, head of the Environmental Protection Agency from 2013 to 2017, has written that "bullish environmental leadership and climate action are not costs; they're investments."

Retreating from the Paris Agreement puts the U.S. on the wrong side of the global economy. Companies like Exxon, Shell, Google, Apple, Amazon, Walmart and PepsiCo appealed to Trump to stick with the agreement. For a supposedly savvy businessman, Trump is showing a remarkable lack of entrepreneurship.

If we put aside strictly environmental issues for a moment, there is something else deeply disturbing about Trump's walking away from the Paris agreement; the president is also walking away from the international community. Only two nations in the world did not sign this landmark document, one at civil war and one that didn't think it went far enough. Trump's renunciation of our global citizenship is as frighteningly shortsighted and dangerous as denying climate science.

Before Trump's late-May foreign trip, European allies who were to meet him at the NATO and G7 summits were cautiously optimistic that they could persuade him of the importance of alliances and to remain in the Paris Agreement. They were quickly disabused of that optimism. Trump spent his first meeting with NATO allies chiding alliance members for their "chronic" failure to pay for their own defense, which he said left the "taxpayers of the United States" forced to foot the bill. "They were left visibly stunned and stone-faced," according to media accounts.

Left out entirely was what European allies hoped most to hear from Trump: a reaffirmation of NATO's mutual defense pact, known as Article 5, and acknowledgement of Russian aggression and provocation in Europe. The German publication Der Spiegel, working from secret minutes of the G7 meetings the magazine was given access to, gave a chilling account of world leaders trying to persuade Trump to change his mind on the climate agreement. He steadfastly refused all arguments, leaving French President Emmanuel Macron to conclude "Now, China leads." Later, German Chancellor Angela Merkel would tell a gathering in Bavaria that Europe's ability to rely on the U.S. was "over, to a certain extent. This is what I have experienced in the last few days."

Oddly, Trump seemed much more comfortable a few days earlier in Saudi Arabia where he had a gold medal draped around his neck and gave away tens of millions of dollars in military hardware. At a gathering of Muslim-majority nations, Trump blasted Iran, which had just re-elected a reformist president, for being an exporter of terrorism and praised the Saudis as if he'd forgotten the "beautiful … kingdom" produced 15 of the 19 terrorists who pulled off the 9/11 attack and is the incubator for the most severe brand of Islam, Wahhabism, that is the takeoff point for the Islamic extremists that Trump loved to hate during his campaign speeches.

Even the Israelis — ignoring the embrace of Prime Minister Benjamin Netanyahu — met Trump with utter indifference. Any who thought Trump could pull off a "Nixon goes to China" moment with the Israeli-Palestinian standoff can't help but be disappointed.

Trump may push aside the prime minister of Montenegro to get himself a better position for a photo, but he clearly has no place on the world stage. That could be tragic not just for the United States, but for the world itself.

Point to any a major problem of the last few years — unemployment, terrorism, the migration of peoples, pandemics like Zika or SARS — and one sees that local issues have global causes and global actions have local consequences. Now more than ever, we need global alliances like the Paris Agreement to ensure every one of this world's citizens has a voice and place in this world. To be great, Americans must be part of that movement, not part of Trump's retreat from the world.