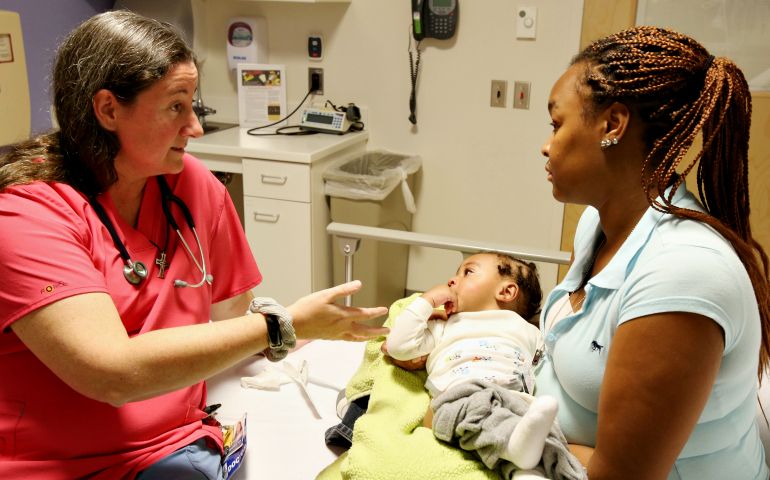 Mercy Sr. Karen Schneider, a pediatrician, talks with the mother of a child in the emergency room at Johns Hopkins Hospital in Baltimore in 2014. (CNS/Bob Roller)

Breathe a sigh of relief for the American people. For now, the Affordable Care Act is safe. On March 24, House Speaker Paul Ryan, Republican of Wisconsin, announced that he and the White House were shelving their effort to replace the current law known as Obamacare.

For now, 24 million Americans can keep their health insurance; states can count on Medicaid expansion; and essential benefits, like maternity and mental health services, are still guaranteed. Yes, let's pause, catch our breath and fully appreciate the disaster that was avoided.

Ryan's bill, the American Health Care Act, would have brought misery to millions of Americans, and not just the 52 million who would not have health coverage in 2026. The bill proposed by House leadership and endorsed by the Trump administration would have repealed tax penalties for people without health insurance; rolled back federal insurance standards; reduced subsidies for the purchase of private insurance; and set new limits on spending for Medicaid, the federal-state program that covers more than 70 million low-income people. The bill would have taken hundreds of billions of dollars from the public coffers. In short, it would have eased the tax burden of the wealthy at the expense of the most vulnerable, especially the poor, the elderly and the chronically ill.

The survival of the Affordable Care Act means that millions of people who have never had health coverage before can continue to buy plans from HealthCare.gov or find relief from an expanded Medicaid.

So, yes, let's breathe a short sigh of relief. But then let's roll up our sleeves and prepare for the next battle in the war that has been declared on the American middle class and people living in poverty.

As with all complicated legislation, whether on the social side like Social Security and food stamps, or the regulatory side like bank finance and trade laws, the drafters of the Affordable Care Act knew it would have to be revisited, tweaked and whole parts rewritten if it were to remain relevant and useful. Premiums, copays and deductibles are too high. That needs to be fixed. Twenty-nine states have yet to take advantage of expanded Medicaid. They must be persuaded to join. Insurance marketplaces need to offer more choice. That must be addressed.

Regrettably, many of the forces that have impeded any fixes to the original legislation remain in place. The irony of contemporary politics is that many of those forces actually enabled Obamacare to survive this round.

The yearslong fight over comprehensive health care reform for this nation continues. Using old and new weapons, Republican obstructionists can continue to work against the fixes the Affordable Care Act desperately needs. The night the legislation he fought for was pulled from consideration, President Donald Trump said, "The best thing that could happen is exactly what happened — watch."

"Obamacare unfortunately will explode," he said later in the day.

Ample evidence exists that the Affordable Care Act will not explode, but if it is not enforced and improved with fixes everyone agrees need to be made, it will become increasingly less effective. Republicans, now in control of the legislature and the White House, could cause a slow demise of the law by discontinuing the marketing campaigns and encouragement from the president essential to maintaining enrollment in the exchanges. Trump could also stop enforcement of the penalty for people who don't have insurance, and he could discontinue subsidy payments to insurers.

Congresspeople who want to fix our health care system may be open to persuasion as never before. In the last two months, as people have come to realize what they have to lose, the general population has grown bolder in pressuring their representatives to defend the Affordable Care Act. That was much in evidence in raucous constituent meetings and town halls that House members and senators witnessed.

Moderate Republicans, especially those facing midterm elections in 2018, rejected the Ryan-Trump plan. Democrats and those who back a fair and equitable health care law must learn from the GOP failure. They must start now to write new, workable legislation, and to retake the lead on this issue. Democrats and moderate Republicans could become the foundation for necessary reforms. It won't be easy, but it could be possible.

Independent Sen. Bernie Sanders of Vermont promises to introduce a bill that would move health care coverage to a single-payer, Medicare-like system. Now is the time for Democrats to come back into the spotlight and use this opportunity to work with Sanders to create a system that works — that works for those who can afford health care insurance and, more vital, for those who cannot.

Other industrialized nations, such as Canada, France and Japan, treat basic health care as a human right for all people. They built their health care systems on that tenet. It's time for the U.S. to recognize that right in this nation. The right to receive care can no longer be predicated on one's financial situation. Everyone in this country deserves the same treatment in the emergency rooms, hospitals, and medical and dental offices in all 50 states.

Once we've taken our deep breath, that should be the next fight.

Editorial | Editorial: Take the lead on health care as a right

Ruling against sisters latest, not last action in Obamacare cases