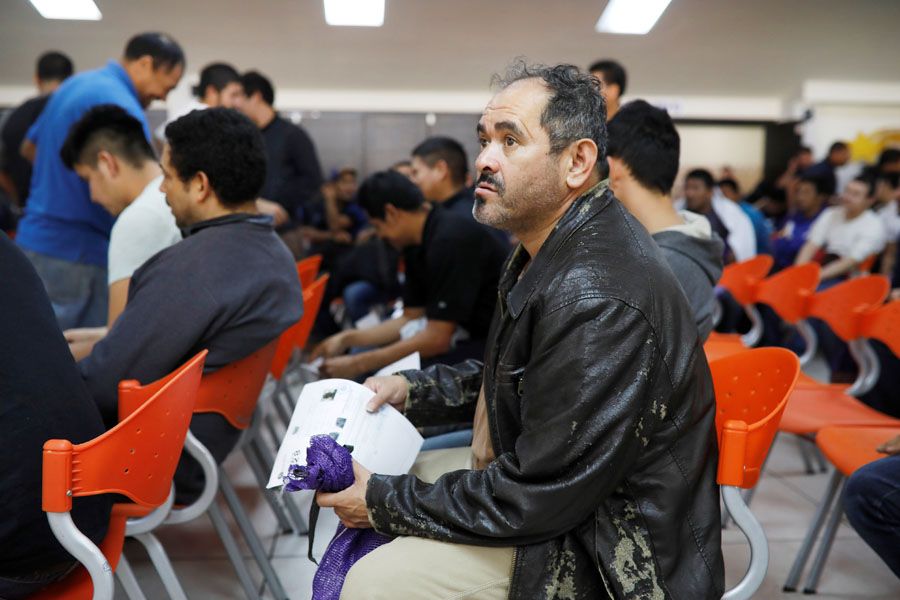 A deportee waits to be processed at an immigration facility Jan. 11, after a flight arrived in San Salvador, El Salvador, with immigrants who had been in the U.S. without documents. U.N. officials said Jan. 12 that U.S. President Donald Trump's reported use of an expletive to describe El Salvador and other countries could "potentially damage and disrupt the lives of many people." (CNS/Jose Cabezas, Reuters)

According to several reports, after news broke that President Donald Trump had referred to African countries and Haiti as "shitholes," he called allies and friends in what one aide described as "a victory lap." This is the measure of the man, both his moral evil and his political genius.

Far be it from anyone who, like myself, scratches out a livelihood by writing, to suggest that words are not important. The president's continued disparagement of immigrants serves to divide Americans not only one from another, but to alienate us from our own history. In a sense, most political issues divide Americans, and the task of a statesman is to try and point to a reconciliation between conflicting viewpoints or, in extreme situations such as the abolition of slavery, to win decisively and then seek a reconciliation. It is worthwhile noting that while it took a great civil war, and not mere words or even votes, to abolish slavery, our nation was blessed to have one of its greatest wordsmiths in the White House at the time, framing the battle and the peace in words that raised up the human spirit and bound the nation's wounds.

One of Trump's particular evils is that he uses words to demean those whom our nation has resolved in some way to assist. In his inaugural address, the president spoke about the "forgotten men and women" of America. He meant by that those average Joes and Janes who have not been the beneficiary of special programs or cultural focus. His purpose in mentioning them was not benign, it was not to remind the rest of us that, for example, as much as we are right to worry about the rising costs of college, we should remember those kids who are not going to college too. No, his purpose was to stoke resentment and it worked.

He mocked a disabled reporter, even through our country, through the bipartisan Americans with Disabilities Act, had decided we were wealthy enough and morally astute enough, to make the effort to level the playing field for those with disabilities. Our sidewalks now terminate in ramps, our offices all have elevators, our schools provide special education services, all in an effort to be a more inclusive and just society.

He mocked John McCain for being a prisoner of war, even though McCain has always been seen as a hero, not just because he was a POW but because he refused early release to exercise solidarity with his colleagues. That is a kind of heroism that is rare and worthy of respect. But, the draft dodging president demeaned McCain as a kind of loser.

He routinely characterizes immigrants as criminals. He repeatedly picks a fight with black Americans — a congresswoman who was in the car with a widow he called, the father of a UCLA basketball player, and his predecessor.

Trump uses words to divide, that is clear and it is reprehensible. But, he also uses words to distract, and that is why he had a "victory lap" last week. While outraged members of Congress and the media wondered if the president is a racist, or called upon him to retract his comments, or explained, as if any explanation was required, that the remarks were beneath the dignity of the office, Trump had changed the topic.

The president needed to change the topic for two reasons. First, after he allowed cameras to stay in the room for 55 minutes of a meeting with congressional leaders, during which he contradicted himself at least four times on policy specifics related to immigration, some of his ever-angry base took umbrage at his seeming willingness to cut a deal. Ann Coulter, the high priestess of nativism, went on a Twitter rant of her own, attacking the president for the meeting, which she called a "DACA lovefest." Tucker Carlson of FOX News also lit into the president because of his apparent willingness to strike a deal with Congress on DACA. So, aware that he can never afford to alienate his base, Trump won them back with his vulgarism.

Those Salvadorans, and the Honduran and Haitian immigrants with temporary protected status have some 273,000 U.S. citizen children, according to the Center for Migration Studies. So, instead of asking if Trump's verbiage proved he is a racist, the media could have spent the last week interviewing families about to be ripped apart by these mass deportations, and the country could have seen the faces of the scared children and distraught parents.

I have said it before and will say it again: I do not think Donald Trump is a racist. It is worse than that. He is willing to use racism to fire up his base and divide the country in ways that he believes will help him politically. He is, you might say, a racist when it suits his political goals, a cynic more than a racist, but a cynic schooled by his own success to perceive value in stoking racial animus. It doesn't matter to him that this is bad for the people involved, or bad for the country as a whole. He is, after all, a man whose cynicism is matched by his narcissism.

Those of us who wish to resist the president's morally foul agenda must stop falling for his distractions. We must avoid the almost Jansenistic stance, which is more disturbed that our national pedigree is befouled by the president's words than we are by the prospect of a couple hundred thousand poor folk being separated from their families and thrust back into a society that cannot absorb them. I hope that it is the sheer horror at the latter prospect that keeps us from letting our minds go there, but that prospect is here. The president is perfectly willing to embark on this cruel course. The Republicans in Congress are not going to stop him. Let us at least keep the focus on what truly matters, on what he does more than what he says. Both matter, to be sure, but our immigrant brothers and sisters need us to be thinking creatively about what we can do to protect them, and fretting less about the president's latest vulgarity.

At migration summit, bishops commit to work toward 'church without borders'