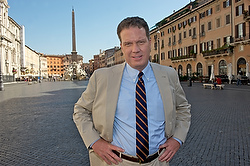 VATICAN CITY -- The establishment of a new post of senior communications adviser is a step in the right direction to help the Vatican deal with the challenges of a sound-bite culture, said the American journalist appointed to the job.

Greg Burke, 52, was named to the newly created position in the Vatican's Secretariat of State and will start in July. The announcement was made Sunday on Vatican Radio.

Burke, a native of St. Louis, told Catholic News Service on Monday that his job will be to help "shape the message" coming out of the Vatican and make sure everyone there "stays on message."

It's a role similar to the White House's director of communications, who supplements the work of a more visible spokesperson, Burke said, as he described some of the challenges he plans to address: "What's the message we want to get out? How do we get it out?" And how does the Vatican respond to issues getting traction in the media?

The communications strategy "sounds very simple, but its execution will be very complicated," he said.

He will also help develop and strengthen lines of communication among the Holy See's numerous communications outlets, which include TV, radio, a newspaper, a book publishing house and a press office. He will work with Archbishop Angelo Becciu, the No. 3 official at the Vatican Secretariat of State, and U.S. Msgr. Peter B. Wells, assessor for general affairs.

Burke, a graduate of Columbia University's school of journalism, has spent the past 24 years based in Rome as a journalist with the National Catholic Register, Time magazine and, for the past 10 years, the Fox News network.

While he is not an expert in PR or communications, Burke said his experience covering news events at the Vatican and throughout Europe and the Middle East means "I know what journalists are looking for and what they need, and I know how things will play out in the media."

A good example of a past media storm that could have been avoided, he said, was during Pope Benedict XVI's speech on Islam in Regensburg, Germany, in 2006. The pope quoted a medieval Byzantine emperor, who said the prophet Mohammed had brought "things only evil and inhuman." The pope later acknowledged the quotation was open to misinterpretation, as he had not meant it as an endorsement of the emperor's words.

If such a speech had been restricted to a small group of scholars, there might have been no problems, Burke said, but as a talk televised to the world, "in a sound-bite, headline culture, it's a whole different thing," Burke said.

Burke said he has been covering the Vatican long enough "to know that no one walks in and changes things" overnight. But, he said he hopes "this post is a step in the right direction" and that he will be able to alert the right people in advance of any potential message mix-ups.

A lifelong Catholic and numerary member of Opus Dei, Burke said he wouldn't have taken the job if he didn't put all his faith and trust in God. Numeraries are celibate and contribute a large part of their salaries to the prelature.

When he was first approached about the new position, Burke declined, but then over the course of a week, he went with "a gut feeling" to finally accept the job.

"I had a great job at Fox, just the right mix of time in Rome and travel; I was in my comfort zone," he said.

It took him some time to "get the courage up" and take the chance rather than risk living with the nagging feeling he could have been able to make a difference, he said.

The appointment is likely to provoke comparisons between Burke and Joaquin Navarro-Valls, another Opus Dei member who served as Vatican spokesman during Blessed John Paul II's pontificate.

Burke said that he didn't know whether being a numerary of Opus Dei was a factor in his hiring, but he noted, "I wasn't hired at Fox because of Opus Dei," but rather for his knowledge and experience.

Being a native speaker of English, which is the working language of much of the global media, was perhaps a more critical factor in his favor, he said.

Despite the Vatican's communications' challenges, Burke said the church "still has got a great message" that needs to get out there.

"It's a message of spread the love, which often gets lost in a lot of the static," he said.

While he doesn't have "a magic wand" or feel he has all the answers, Burke said the church's direction should be based on being clear and open with the world.

He said a great model to emulate would be a communications' structure similar to that of the United Nations, whose website lists "a spokesperson on every continent with cellphone numbers in case you need an interview and free video footage."

"That's the direction I'd like to see. Greater openness and accountability is all positive" for any institution, organization and business, not just the Vatican, he said.

"The danger is you say nothing, it's a closed shop," he said, and then lies, distortions or misunderstanding can fill the media vacuum.

He grew up in St. Louis Hills, which he credits as being "maybe the best neighborhood to grow up in with small houses, small yards and big families."

Living five minutes from his parish of St. Gabriel, the church was a big part of community life, he said.

Despite his all-American background, after nearly a quarter century in Rome, Burke took Italian citizenship earlier this year. That means he will be right at home at the Vatican, where Italians still far outnumber employees of any other nationality.

Editorial: Texas storm's aftermath a lesson in the need for government