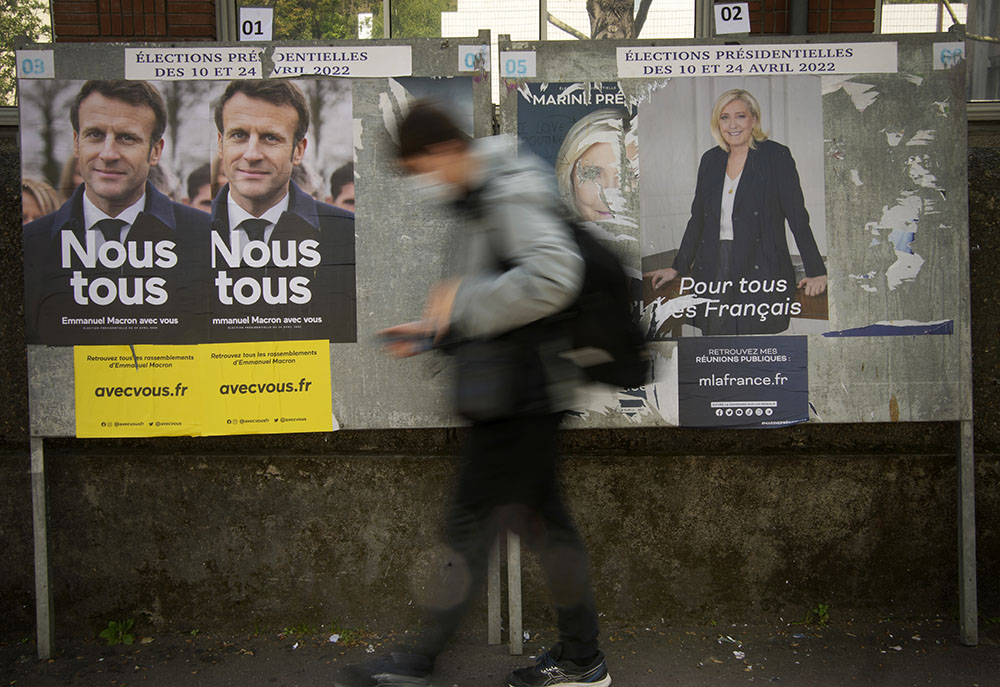 Catholicism in France is more a culture than a religion. Catholic values have inspired the welfare state and most businesses do not work on Catholic holidays.

In that regard, France is still a Catholic country, despite how COVID-19 pandemic lockdowns and the shocking October 2021 report on sexual abuse in the church have led to emptier and emptier churches on Sundays.

The results of the first round of the 2022 presidential elections, held on April 10, were therefore widely considered surprising. As expected, incumbent President Emmanuel Macron, seen as a moderate if corporate politician, came in first place with nearly 28% of the vote. But Marine Le Pen, who leads the right-wing National Rally party, garnered 23%.

The two will face each other again in a runoff on April 24.

Also surprising in the first round was how Catholics voted. The majority of Catholics used to vote for moderate candidates, or the center-right, rather than for extremists.

Not anymore. Now they are much more split, and open to voting for candidates even on what used to be considered the extreme right of the political spectrum — who lead parties that claim that France's essence as a European country is being threatened, mainly by immigrants from non-European countries.

According to a poll conducted by the French Catholic paper La Croix, about 40% of practicing Catholics voted for one of the two right-wing candidates: Le Pen, whose party was formerly known as the National Front; and Éric Zemmour, a firebrand who leads a party named Reconquête and mainly campaigns against immigration, rights for women and homosexuals, and the legalization of euthanasia.

Le Pen and Zemmour's parties openly denounce immigration, with severe racist undertones against non-Christian immigrants, not entirely unlike candidates in the U.S. who make nods toward white supremacy. 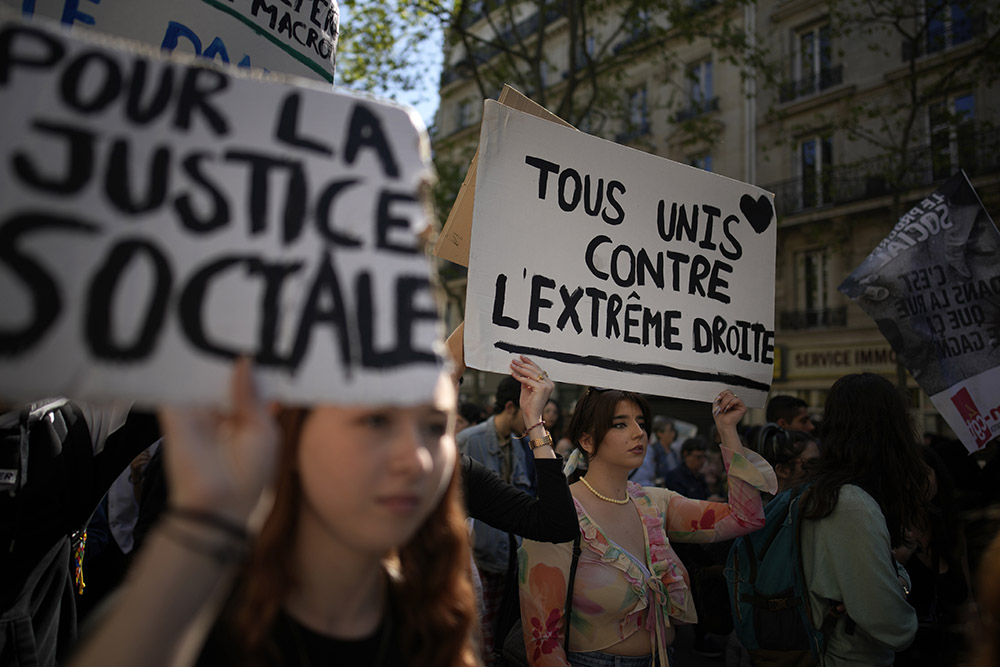 Demonstrators against the French extreme right are seen in Paris April 16. (AP/Christophe Ena)

Zemmour got a lot of attention when he claimed on the campaign trail that Western Europe was threatened by a "grand remplacement" ("great replacement") of Christians by Muslims. He did not mention that numbers of immigrants in recent years have been declining: In 2020, according to official figures, about 215,000 immigrants settled in France, with half of them coming from Africa.

A Sephardic Jew whose family came from North Africa, Zemmour summarized in 2018 that his philosophy in terms of the Christian faith in France is that he is "against Christ but for the church."

Marine Le Pen is the youngest daughter of Jean-Marie Le Pen, the decadeslong leader of the National Front, who was known for an extreme brand of right-wing politics. Since taking leadership of the party in 2011, the younger Le Pen has sought to mainstream her movement, changing its name and toning down some of its more controversial positions.

Notably, when Jean-Marie Le Pen made the final runoff for the 2002 presidential election against then-incumbent Jacques Chirac, the bishops' conference openly told Catholics they could not vote for a party that did not welcome foreigners, offer public money to refugees, or extend help to the poorest and weakest of our society.

But when the National Front made the runoff for the second time in 2017, this time with Marine Le Pen facing Macron, the bishops kept quiet. At the time, this reporter remembers meeting several priests who told her: "About 30 % of our parishioners vote for the National Front." The priests would say: "We cannot dissuade them; they would stop coming to church."

Even more clearly, even before COVID-19 and the 2021 report on abuse in the church, a priest told NCR: "People who give money to the church are often the most conservative. If we tell them not to vote for the extreme right, we won't have any money anymore."

More than a money issue, it is an identity question: "We think that the history of France is closely linked to Christianity," Baptiste Laroche, a Zemmour supporter, said in a story published by the Catholic weekly La Vie.

"Zemmour tells the truth about immigration, I do not want France to become Saudi Arabia," another supporter said in the same article.

Extreme right candidates say they are trying to save France's identity. This is something the bishops' conference disputed in its recent statement before the first round of the 2022 election.

"We are not going to elect either a savior for France, nor a Messiah, nor someone who will embody the good that has to be done," Reims Archbishop Éric de Moulins-Beaufort, president of the bishops' conference, said in his closing remarks at the end of the bishops' annual plenary session.

Without giving voting instructions, the archbishop added, "Our country cannot be defined by the nostalgia of its past glory. ... Our country is alive when it carries among the world's nations the voice of respect for every human being."

Another surprise of this first round is the low number of votes for Valérie Pécresse, the only candidate who openly said she was a Catholic and leads Les Républicains, the center-right party, which is seen as upholding traditional Catholic values. She only got 8% of the Catholic vote, according to the La Croix survey.

French Catholics often express concern for the state of the planet and are very involved in ecological issues, especially at the local level. This did not show in the vote for a president. 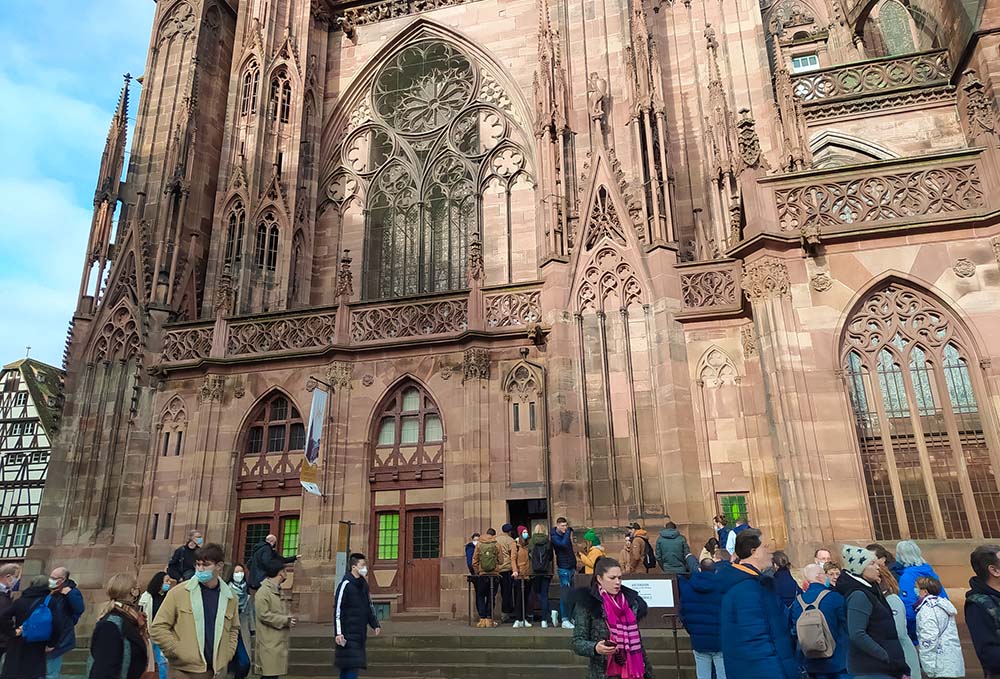 People are seen near Notre Dame Cathedral in Strasbourg, France, Dec. 12, 2021. Though France is still a Catholic country in some ways, COVID-19 lockdowns and a shocking report on abuse in the church have led to emptier and emptier churches on Sundays. (Dreamstime/Solarisys13)

"This does not mean that practicing Catholics are not sensitive to environmental issues, but these questions lag far behind other ones. Some Catholics take the encyclical Laudato Si' very seriously, others don't," Jérôme Fourquet, director of France's largest political polling firm, IFOP, said in an interview with La Vie.

On another issue that matters very much to Catholics, the question of euthanasia, the president of the bishops expressed a clear opinion: "Our country would not be greater if it decided to cease to accompany human beings until the end of their life, surrounding them with fraternal love, choosing instead a death pretending it would be an easier one."

A bill authorizing euthanasia in some cases is due to be discussed by the next parliament. The institutional church and a lot of Catholics oppose it, but public opinion polls appear to indicate that most French people believe it would not be wrong to allow someone to choose to end his or her life if they are severely ill and have no chance of making a recovery.

Ethical questions such as these help explain why Catholics have been more willing to vote for extreme right-wing parties in recent years. The rift between Catholics and moderate politicians can be traced easily back to 2013, when then-President François Hollande oversaw the legalization of same-sex marriage.

Even traditional right-wing parties have said they would not seek the abolition of that law. The same is happening with the right to have an abortion, legalized in 1975. Nobody questions it anymore. Last year, a law allowing any woman to benefit from in vitro fertilization deepened the gap between churchgoers — who are mainly over 60 — and mainstream political parties.

A new issue has come up recently: parents who seek to have children through surrogacy. Macron has repeated time and again that he would never seek to legalize surrogacy, which is currently prohibited. But a lot of his opponents on the right are convinced he will give in to pressure.

The second round of the presidential election, April 24, will show if Catholics are really tempted by right-wing extremists or will go back to voting for the more moderate candidate, as they have done traditionally.