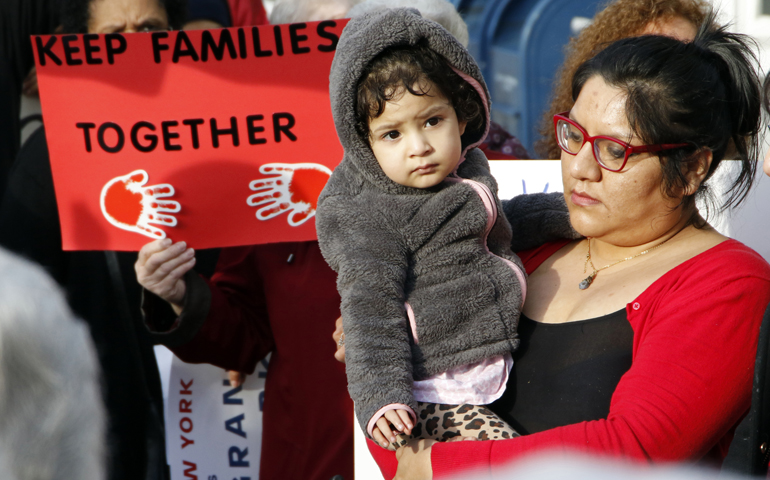 Victoria Daza, a native of Peru and an immigrants' rights activist, holds her daughter during a rally in support of immigrants in Massapequa Park, N.Y., Feb. 24. (CNS/Gregory A. Shemitz)

None of the Catholics on stage disagreed. From the deepest wells of the faith tradition, they all said, the mandate is unequivocal and uncomplicated: Welcome the stranger.

The immigration debate may have taken a back seat recently on the national stage to health care wrangling, Russian skullduggery and a Supreme Court nominee, but the issue found a place at the March 20 panel discussion presented by the Initiative on Catholic Social Thought and Public Life at Georgetown University.

Institute head and moderator John Carr put it another way at one point during the discussion: There was consensus on principles, but divergence on how to "get beyond the fear" and onto comprehensive reform of immigration law.

The discussion — among three refugees (one an undocumented student, the other a conservative Republican, a third who now works to resettle refugees), as well as a bishop and the director of immigration policy for the nation's hierarchy — occurred against the backdrop of a theologically rich bit of advocacy by Jesuit Fr. Leo O'Donovan, president emeritus of Georgetown and interim executive director for Jesuit Refugee Service/USA.

"Theologians have been contemplating the plight of refugees and internally displaced persons increasingly over recent years," said O'Donovan in opening remarks. Significant theology emerges, he said, when migrants "strange in a receiving culture, bring with them new human resources and experiences reminding the receiving culture of the miraculous multiformity of the human family and God's creation."

Such acceptance, however, involves a "conversion of mind and heart" that requires "confronting attitudes of cultural superiority, indifference and racism; accepting migrants not as foreboding aliens, terrorists or economic threats, but as persons with dignity and rights revealing the presence of Christ."

Such is not the stuff, of course, of border walls and executive orders banning refugees from majority Muslim countries. Seeing value in those executive orders, however, should not immediately get someone labeled an Islamophobe or anti-immigrant, said Alfonso Aguilar, the lone figure on stage openly supportive of President Donald Trump. Aguilar, president of the Latino Partnership for Conservative Principles, served as director of the Office of Citizenship under President George W. Bush. "I believe this issue has been oversimplified and used by politically by both parties," he said.

Having openly criticized Trump during the campaign for his language in describing refugees, Aguilar has come around more recently to supporting the president and some of his intent.

"There are legitimate concerns in terms of being able to vet people from some of those countries," he said. Labeling someone an Islamaphobe or anti-immigration because one agrees with the executive orders "is not constructive. I believe we need more immigration, not less, because we do have to address the issue of security."

Aguilar is the son of parents who migrated from their home countries and wound up in Puerto Rico, where he was raised. He believes that as much as "politics is the art of the possible," and with Trump as president, "I am going to be constructive. I'm going to do everything I can to actually get us into a position where we can have a conversation."

It is not oversimplifying "when you look at what actually they have written in the executive orders and the memos as to who now is a priority for enforcement," replied Ashley Feasley, director for the Office of Migration Policy and Public Affairs at the U.S. Conference of Catholic Bishops. She agreed with Aguilar that the Obama administration had engaged in deporting between 2 million and 3 million individuals, but the expansion today includes not just those convicted of a felony but "anyone who has committed a crime."

Raids, she said, have also arrested people who were not originally targets of the actions. "And that creates fear."

Luis Gonzalez, a Georgetown sophomore majoring in American studies, is aware "day by day" and "hour by hour" of the immigration system. He came here from Mexico as an 8-year-old to join his parents, who had migrated to make a better life for him and his brother. He worked hard and graduated from high school "with an awesome GPA" and applied to Georgetown. But attending "tough" Georgetown classes, he is often distracted by thoughts of his mother. She and his father divorced when he was young and she has washed dishes in a restaurant in California ever since.

He has memories of her coming home from her job exhausted. Her hard work was part of his motivation to succeed academically. Now, he said, he worries because she fears going to the park or to the store, aware that she might be picked up by immigration authorities.

Aden Batar, a Muslim refugee from Somalia, has for 20 years worked for Catholic Community Services of Salt Lake City where he now is director for immigration and refugee resettlement. He left his home and made his way to a refugee camp in Kenya, he said, to escape violence that had taken the lives of family members, including his son.

A refugee, he explained, is never a traveler by choice. It is someone who has been driven from their home by politics, race, or violence. Refugees "don't have a choice of where to go. They take whatever journey will save their lives, whether it's taking the road or taking the ocean. They will go anywhere to save their lives."

He's on the other end of the journey these days, and sees the fear in the new immigrant population and he knows executive orders have consequences. A woman with a 2-year-old child came into his Utah office crying after the first executive order on Jan. 27 banned travel from seven Muslim majority countries. Her husband was in one of those countries and had gone through a 2-year process to obtain a visa. It had finally been granted and he was set to travel when the ban was announced.

When federal courts struck down the ban, her husband was allowed to travel to the United States. Batar said "more than 400 people showed up at the airport to welcome the new arrival."

He also noted that because of the threatened travel ban, immigration has dropped considerably and he recently was forced to lay off 10 of his staff.

Amid the complexity of the issue, Bishop Ricardo Ramirez, bishop emeritus of Las Cruces, New Mexico, returned mid-discussion to the clarity of Christianity's sacred texts. Las Cruces is a border diocese where the immigration issue is a constant and where, he said, the green and white border patrol vehicles seem as numerous as taxi cabs in Washington. He knows border crossers and the complexity of the issue.

The Bible is full of border crossers, he said, from Moses and Abraham and Sarah to the people of Israel, repeating that they had been strangers in a strange land.

"Then Jesus, the greatest of all migrants," traveled constantly in his public ministry. His border crossing included the passage "from divinity to humanity" as well as cultural borders when he spoke to women and touched lepers and performed miracles, said Ramirez. "And then, the ultimate border, "from death to Resurrection."

The church's teachings, perhaps unencumbered by public policy considerations, are grounded in the teaching about people, he said. "These are people who have dignity that must be respected. That is the basis for all of church teaching."