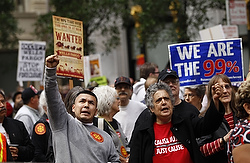 Demonstrators protest outside of the Wells Fargo shareholders meeting in the financial district in San Francisco on April 24, calling for bank officials to be more responsive to homeowners facing foreclosure. (CNS/Reuters/Robert Galbraith)

WASHINGTON -- When Fr. Robert Rien, flanked by the staff of St. Ignatius of Antioch Parish, showed up at the Bank of America branch in Antioch, Calif., in 2009 to close out the church's account -- all of $135,000 -- the only thing on his mind was the plight of two dozen families in his flock struggling with their mortgages against the $2.3-trillion behemoth.

"We know it wasn't much," he said of the parish's savings. "But it sent a message and it started a movement."

Creating a movement was hardly on the minds of the parish council members who approved the divestment. They simply wanted to see the parish's cash assets invested locally to help their middle-class city of 102,000 residents, Rien said. But word of the divestment spread quickly, and soon other congregations were taking the same step as California's housing crisis careened onward.

Since then, religious congregations have withdrawn about $40 million nationwide from the country's largest banks, including Bank of America, JP Morgan Chase, Wells Fargo and Citigroup, said Tim Lillienthal, lead organizer with the PICO National Network, the largest faith-based organizing network in the United States.

"We're trying to get the banks to listen to us to try to keep people in their homes," Lillienthal told said. "People are asking, 'If they won't listen, what can we do? What level of action will get their attention?' "

The divestiture campaign has hardly placed a dent in the banks' deposits. In fact, one of the targets, Wells Fargo, which services more mortgages than any U.S. bank, has seen deposits increase for several quarters running, a company spokeswoman said.

Still, Rien, the administrator of St. Ignatius, justified the action, saying large banks must be held responsible for the "ruthlessness of what they have done to families."

The campaign to boost bank accountability has gained wider awareness across the country as hundreds of faith-based and grass-roots organizations began working alongside the Occupy Wall Street movement. The groups have succeeded in calling attention to executive compensation, secrecy in financial dealings and the banks' lobbying efforts to water down rules governing financial reform under the Dodd-Frank Wall Street Reform and Consumer Protection Act passed in 2010.

Highly touted as a needed step to limit some of the banking practices that led to the 2007-2008 financial crisis, Dodd-Frank's impact has been far less than expected by consumer advocates as the rulemaking process has slowed to a crawl because of opposition from most segments of the financial industry.

In one of a long series of grass-roots responses, a vocal contingent of several hundred people marched from a prayer service at Harry Bridges Plaza to Wells Fargo's San Francisco headquarters, where shareholders gathered Tuesday in a standing-room-only meeting. Led by a group of faith leaders, including several Catholic priests, the peaceful protest called for a moratorium on home foreclosures and for the company to pay its fair share of taxes.

Two dozen protesters were arrested on misdemeanor charges as some shareholders in the group were denied entrance to the meeting even as other shareholders presented proxy statements and letters of invitation to guards behind barricades.

Fr. Jose Lucero, parochial vicar of Corpus Christi Parish in San Francisco, helped organize the event, which he said served to "raise awareness of the fact that banks are very unfair after they received fair treatment" thanks to government-backed bailouts worth billions of dollars.

"There's an injustice when all over, people are out of work, people are underwater on their mortgages and they see companies like Wells Fargo get profits in the billions and give CEOs salaries in the millions," he said, citing the situation of several parishioners who face foreclosure.

"It's important for us as faith leaders to raise the issue that people are being treated very unjustly and very unfairly," he said.

She pointed to the 740,000 mortgage modifications and $4.1 billion in principle reduction the company has offered to homeowners since 2009. The bank also has conducted 720 home preservation workshops around the country, she said.

One of the longest-running efforts to focus on banking accountability has operated with much less public attention for years. Several faith-based coalitions promoting socially responsible investment have challenged corporate decision-making through shareholder resolutions and public statements calling for transparency in financial dealings and justice for bank customers.

Oblate Fr. Seamus Finn, a member of the board of directors of the Interfaith Center for Corporate Responsibility, said all of the tactics are meant to get the attention of corporate officials about questionable business practices.

Finn, who planned to present resolutions during the annual meetings at JP Morgan Chase and the investment firm of Goldman Sachs in May, said the massive bank lobbying effort to minimize the impact of Dodd-Frank on trading and investment practices is high on the list of concerns being raised with corporate CEOs.
Citigroup officials and shareholders meeting in Dallas on April 17 were confronted with those questions in a statement by Benedictine Sr. Susan Mika, executive director of the Socially Responsible Investment Coalition based in San Antonio.

Susan told CNS that she pointed to conflicts of interest between brokers and analysts, liabilities that are not listed on balance sheets, tax avoidance and risk management in derivatives trading. She also charged that the company was "spending enormous amounts of money to stall the rulemaking process" under Dodd-Frank.

Susan said she told Pandit and the other Citigroup officials, "We've engaged you (for) many years and we're not going away."

Mexican archdiocese: Companies that work on border wall are 'traitors'